Mark Rossi is a believer in signs. Not in the free-spirited kind of way, but in that way where you notice coincidences and takethose messages as a call to action. 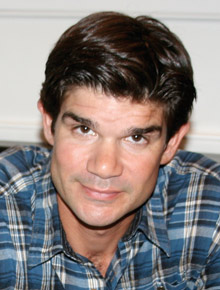 2012 Top Achiever-Dealer: Mark Rossi, President Avanti Restaurant Solutions, Inc. Throughout his life, he's had a few such interesting coincidences around important life events: seeing an article about Genoa, Italy, on the front page of the newspaper's travel section the Sunday after his daughter Genoa was born; finding out that his wife Lisa's family and his grew up in two nearby small towns outside Genoa and that their parents unknowingly attended the same wedding in the sixties; and finding out that Lisa was from Stockton where he went to school even though that's not where or how they met (it was a blind date setup by the wife of Rossi's best friend from college). Rossi had no need for more blind dates after that one as the two married in 2000 following a two-year courtship.

So when Rossi saw the signs it was time to start his own business, he acted on it, founding Avanti Restaurant Solutions in October 2003. Now, at the ripe age of just 38 and president of the company, Rossi recently expanded his Sacramento-based business into Southern California and remains steadily on track to become the industry's answer to chain restaurant development. In fact, Avanti was recognized as one of the Top 100 fastest growing companies in the region by the Sacramento Business Journal four out of the last five years.

Avanti goes beyond traditional equipment sales as a dealership to include design, installation and careful project management work. Heavily focused on chains — predominantly national casual dining and fast-casual operations with some quick-serve — the dealership prides itself on its attention to detail and foundational work built on systems and strategy development that allows multi-unit operators to replicate successful stores from state to state, year after year.

This is where Avanti differs from street-sales dealers like the one where he got his start and first experimented with chain work. After a few years out of college working for the Gallo wine distributor in South San Francisco, Rossi migrated to his family's business, East Bay Restaurant Supply in Oakland, Calif. Rossi's great uncle founded the dealership in 1934 and his grandmother ran it during World War II. It was at East Bay that Rossi learned the ins and outs of an equipment dealer — working in all aspects of the business, from the showroom floor to managing the warehouse, operations and logistics to territory equipment sales. "Our chain salesperson left the company so I took over, selling smallwares to her chain accounts," he recalls.

Rossi instantly found his niche. From there he expanded the dealer's chain clients, even bringing in a now major juice bar chain when it was then just a burgeoning concept. It was this new passion that prompted Rossi's decision to venture off on his own, even moving to Sacramento to be a part of the region's chain-friendly environment and easy travel access to other chain-focused areas of the country, like Denver and Dallas.

"I love the chain business," Rossi says. "I like the repetitive nature. With territory sales, a street force can go into any store or other targeted account in your area and call on chefs and different people and sell this or that. Every deal is very independent from the next. With the chain business, the gestation period takes more time but the deals are more long term, with systems put in place to maximize efficiencies and buying power."

Rossi prefers that "comfort zone" — the consistency a day-to-day, project-to-project structure provides versus the more flexible nature of territory sales. That doesn't mean that consistent chain work is free from inconsistent situations. Problems certainly pop up — it's how you deal with them when they do that sets you apart, Rossi believes, noting that Avanti is of the "fix it immediately, ask questions later" mindset.

A good example of this happened when Rossi noticed every time he went into a new job for a juice bar client, nothing fit properly. "Our then project manager, Rory Clarke, figured out that there was a radius point in the front of the store that the entire design of the space was based off of," Rossi says. "It was also the centerpoint for the tile so if the tile wasn't in the right place, the store would be off every time." In fact, the whole project came down to that one tile that wasn't being centered properly. It was a matter of the team providing a drawing and a template that showed every contractor how to properly lay out the front of the house so everything fit properly.

"I can't say enough about my team; they are people I love and would do anything for," Rossi says. "They really care, and I feel that's what you need in this industry to succeed." They're also happy — Rossi is a firm believer in team building activities, such as bringing in business and life coaches for personal development as well as professional growth. The group celebrates meeting goals on a quarterly and yearly basis by taking rafting trips, horseback riding and partaking in other rewards for hard work.

It's this solid teamwork, strict attention to detail and problem-solving ability that has helped Avanti grow exponentially in just the past few years. Chains not only appreciate the dealership's consistency, they need it.

"I'm big on systems," he says. "I like the organization, structure and consistency they provide, and the ability to see the big picture. It's like that saying 'fool me once...' I don't like getting fooled twice. I'm focused on long-term relationships, design and flow, procedures. I don't want to go to every job and hear that the same piece of wainscoting is the wrong size. My passion is more about creating a large-scale system that can be rolled out multiple times without having to reinvent the wheel every time."

Rossi also credits his business success to two other main things he holds dear: his hard-working team and their core values.

While he has a strong operations background, it's not his ideal way to spend his day. But Rossi knew he wanted Avanti to be a full-service dealership, not just one that sells equipment. "I outsource as much as I can by leveraging other people's strengths," he says. "We have people great at operations, marketing, logistics and IT." With these diverse services, Rossi says, his team can see a project from concept development all the way through to completion, helping chains replicate successful prototypes into multiple stores.

"I don't believe it's fair that someone should pay more for equipment than someone else," he says. "I don't make or build the equipment, but what I do provide are the systems, services and the people who do a really good job." That means helping clients beyond just selecting, sourcing and installing equipment by drilling down to the details of project management work: assisting with energy efficiency initiatives, layout and flow efficiencies, collaborative design and project meetings, designating different jobs to different people and making sure everything gets done properly, and on time.

Chain work is a rigid business. Rossi takes pride in the five core business and moral values upon which Avanti was built in order to handle high-profile clients and projects: 1) connect and communicate; 2) insist on integrity; 3) think long term; 4) see it through, and 5) desire to grow.

By "connect and communicate," Rossi means doing what you say you're going to do and insisting on integrity — no cheating, lying or stealing — naturally. But it's also about being transparent with clients and insisting on accuracy.

Finally, the "desire to grow" happens on both sides — if both Avanti and the client are thinking long-term, Avanti wants to help the client to grow in terms of stores, knowledge and systems improvement. When the client grows, so does Avanti. It's a win-win situation.

"If everyone shares these values we have a customer for life," Rossi says. "It's when we get away from those values where we get into trouble." This mindset has come into play not just when making hiring decisions, but also when deciding on whether to go forward with a client or project, too.

The core values have paid off. Last August, Rossi made the move with his family to Costa Mesa near Irvine, the hub of chain activity in Southern California, where he opened Avanti's second office. Rory Clarke, now vice president of operations, runs the original office in Sacramento, another strong test market for chains. Rossi's short-term goals center on continued national expansion.

Rossi's come a long way since his first client in the nine years Avanti's been in business. "I remember my first customer — it was a Gloria Jean's Coffee in the Houston airport," he says. "I was doing everything by myself back then. I still remember being all sweaty and nervous when I got the first bill in the mail. There were a lot of things against me starting my own dealership. It was really difficult."

Still, he did it. And according to Rossi's goals, this is just the beginning.