When talking with Joe McDonald, the conversation always circles back to others. The team at E3: co-partners Joe Burbine and Ken Lawler, along with Tom Lawler, Jeannie Yacino, Michelle Clary, Jane Roach, and Chef Phil Moricone. Jessica, his wife of seven years and their children, four-year-old Emily and seven-week old twins Tatum and Tucker. An extraordinarily humble and gracious person, it's no wonder that so many in the industry respect Joe McDonald. 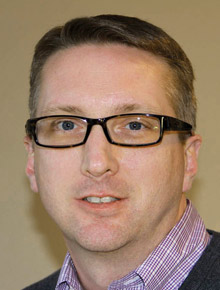 2012 Top Achiever-Manufacturers Rep: Joe McDonald, President, E3 Commercial Kitchen Solutions, Tauton, Mass."When you asked me what I am most proud of the past couple of years I mentioned the way our group has embraced change and the attitude of believing in the old saying, 'if there is a way to do it better, find it,'" says McDonald, president of E3 Commercial Kitchen Solutions in Tauton, Mass. "Please know I took that question specific to the industry. But when I walked in my house last night and my four-year-old Emily ran out to give me my daily welcome home hug and I heard a baby crying in the background I thought of that very question. That is when I realized that I am most proud of being a good husband and dad."

Starting with washing dishes at the age of 14, Joe McDonald has worked in foodservice for the majority of his life. While studying communications at the University of Rhode Island, he waited tables at various restaurants in between semesters on his summer break. After graduation, he saved up some money working as a restaurant manager. It seemed McDonald was destined for the industry; when an opportunity became available to work at Paramount Restaurant Supply in Rhode Island, he took it.

After a couple years working as an estimator for Paramount, McDonald was offered a position at SkalEast in New England where he sold equipment for a few years under the guidance of Carl Huerth.

After Skal, McDonald worked for Sysco, specializing in the equipment sales side. "I had a large area and a lot of sales people with tremendous amount of lead generation," he says.

Looking to move to New York City with Jessica, McDonald followed one of his leads to Groen, part of Unified Brands. He was hired as director of sales for the Northeast, a position he held from 1999-2001.

Then, through an industry golf outing, McDonald met Jay McGonigle and Don Perry, owners of The MPH Group, who casually asked if he would ever be interested in buying a rep group. Following up a couple days later, The MPH Group gave McDonald the opportunity to buy the firm. Excited about the possibility but looking for a partner, he asked around various dealers and colleagues in the industry for good recommendations. He landed on Joe Burbine, and after several meetings, the two became natural friends and current business partners.

Through 2010, "we had a good run with MPH," McDonald says. But he was looking to grow and had to make some changes to do so. "We made a big decision with the direction of our business to take on new manufacturers, which changed our core lines," he adds.

While the change was intended as a way to grow by opening up opportunities with additional manufacturers, McDonald found it coincidentally opened up another opportunity — freeing up some conflicts of interest to allow him to merge with longtime peer Ken Lawler of Marshall Associates. Through the merger E3 Commercial Kitchen Solutions was formed. "We're moving into our fifteenth month," McDonald says. And going strong.

McDonald's diverse resume touches all aspects of the industry, from operations to equipment sales and dealerships, to broadline distribution to factory sales. These experiences make it easy to see why, as a rep, he's a natural liaison between the end user and the manufacturer, with strong relationships at every point in between.

"As a rep in today's industry we're hired by a manufacturer to make sure people understand their products," he says. "Price has become such a driving factor for people — it's easy to sell on price because all you really need is to be the lowest. But that's something we try to stay away from. When all you have is price, you don't really have anything to offer."

Instead, McDonald and his team act like equipment specialists, concentrating on different segments of the industry and then focusing intently on education. Though everyone works together, each has a specific focus and serves as a point person for that segment: for one person it's chains, for another it's university foodservice, or K-12 or healthcare. McDonald says he spends most of his time with the dealerships and consultants. Then there is a chef on staff who also has account responsibilities.

"I like to say we sell applications rather than just equipment," he says. "I always ask end users 'How many seats do you have? How many covers a night do you have? What are you cooking? What's the employee turnover?'" The latter question is asked because culinary school students these days are actually more familiar with advanced controls. "I want people who use the equipment to understand what it is they're getting."

A large part of that education happens in E3's test kitchen on the Boston University campus, which the rep group shares with the university's culinary program. It's become the perfect setting for showing, not telling — using the space for equipment demos, sales training and more. Most recently E3 helped a large end user learn how to cook ribs in high volume using a combi oven. Back in Tauton, E3 brings in many of its appliances from its 3,000-square-foot warehouse (the company still works through dealer channels to sell this inventory of equipment) to a classroom-style space with a 65-inch monitor for more live demos and product comparisons.

McDonald continues the in-person demos on the road. "I drive a pickup so I'll often take ranges or ovens out on the road so people can actually see the equipment," he says.

An avid cook, McDonald has even unofficially showcased equipment at his own house, using smokers and hot-holding equipment for big cookouts and grill parties with friends, family and co-workers, who in his eyes are one in the same.

After a quick discussion about food and education, again McDonald brings the conversation back to his incredible team at E3. "Merging to become E3 was a huge change for us but everyone was so receptive to everything and willing to adapt," he says. "This award from FE&S magazine really is for everybody in our group. It made me realize that we did the right thing and we can feel good about the business decisions we made. We follow the philosophy of 'if there is a way to do something better, find it.' I think that's what makes us so different – that everyone is always wanting to find a way to do things better even though we've never actually come together as a group to say let's do things that way. We take pride in what we do and that feeds off of each other. Though I'm the president and have two partners we don't have a boss, just eight people who enjoy working together."

Opening up new manufacturer lines wasn't the only change E3 went through at the time of the merger; a technology advocate following the "find a way to do it better" motto, McDonald and his partners took a leap and with the help of his father-in-law, a retired IT pro, switched the company's IT infrastructure to a shared Google Docs/gmail, cloud-based system so that everyone could continue to work remotely with even more ease and cohesiveness.

With the cloud-based system, "everyone can see the inbox from where they are" so client questions and needs are addressed immediately based on who is available. In addition, anyone on the team can pull up a purchase order or document from wherever they are, even using a smart phone.

E3 has also embraced video chat as a way to communicate remotely at any time of day to quickly address client needs or work together as a team on a specific project. McDonald and team also use iPads to pull up video footage of a cooking presentation or equipment demo they did so clients can learn more about the equipment on the spot and in a more interactive way, rather than just looking at a paper catalogue.

"When it comes to technology, why wouldn't you embrace it? I can open up any account and analyze my business from anywhere at any time without having to rely on others for that real time data," McDonald says. "It gives us a real pulse on our markets."

McDonald also keeps his finger on the pulse of technology, trends and equipment by remaining an active member of the Manufacturers' Agents for the Foodservice Industry (MAFSI) and attending regular conferences and shows throughout the year.

Though slightly more than a year old officially, E3 has already begun to prove itself a leader in the industry as a modern manufacturer's rep firm, constantly moving forward and embracing new technologies, solutions and ideas. The question is: What's next?