The Move to Kitchen Transparency

The open kitchen concept has become one of the biggest trends in restaurant design. When customers see an open kitchen, they often assume they see the whole production process. But is that truly possible? And is it practical from an operational standpoint?

Realistically, few kitchens can be 100% open and transparent to the dining public. Eric Norman, vice president of the Midwest office of Clevenger Associates in Dubuque, Iowa, says, “Even in what we would consider an open kitchen, there are still processes that take place outside of the customer’s view. There are always things happening back of house that the customer may not see.”

Ken Schwartz, president of SSA Inc., in Tampa, Fla., agrees. “I don’t think there are any [kitchens] that are ever totally in front,” he says. “There’s always cold storage, dishwashing, scullery. Those things are always behind the scenes. And a lot of times, some of the production cooking is done behind the scenes.”

The type of food a restaurant serves may help determine how transparent its kitchen should be. “If a restaurant purchases from local farms, the transparency of how the product is delivered and the packaging or display confirms the origin,” says Mark Moeller, national restaurant consultant with The Recipe of Success in Westport, Conn. “Fresh and local [food] conveys a ‘we care about you’ message. If a restaurant works with frozen products, they may not want to be as public about it.”

Chefs and owners striving for a transparent kitchen have learned how to deal with the unique challenges open-kitchen designs present. Keeping the kitchen clean represents one of the major challenges. Brazen Open Kitchen is a modern American concept in Dubuque, Iowa, with an open kitchen and a separate 12-seat chef’s counter area called the Reserve Room. Chef and owner Kevin Scharpf says that cleanliness is an issue “first and foremost to almost everybody with an open kitchen.” In some places, he says, “out of sight and out of mind” often serves as the operative phrase. “In a lot of kitchens, they’ll put a bus tub right on the floor, and they’re dumping dirty pans into it,” he adds. “They just don’t have to worry about how they’re working and how clean they are.” 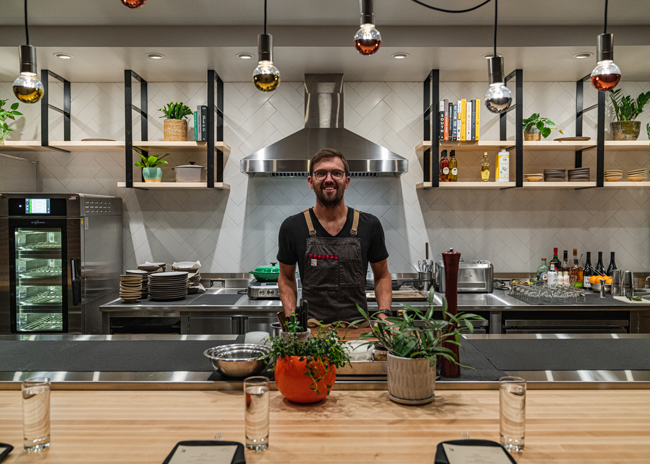 Kevin Scharpf, the chef and owner of Brazen Open Kitchen, believes the greater exposure of an open kitchen has been a plus to his restaurant.

Open kitchens can make customers feel closer to kitchen staff, which may or may not be a good thing. Lexi Zable owns two seafood restaurants in Maine, The Dip Net Restaurant in Port Clyde and The Grey Owl Bar & Grill in Rockland. While The Grey Owl has a traditional back-of-the-house kitchen, The Dip Net is a casual seafood restaurant right on the dock that features an open kitchen. The latter’s informal setting can sometimes make customers feel a little too close to the staff, she says.

But operators can turn that challenge into a public relations opportunity. At Casa Santo Stefano, an upscale Italian concept in Tampa, Fla., almost “everything on the menu is being produced on the front line,” says Richard Gonzmart, president and CEO of the Columbia Restaurant Group, which owns the operation. About the only exception to front-of-the-house prep is sauces, which staff prepare in the restaurant’s large kettle in the back of the house. But for diners who want to see everything, Gonzmart says that “we welcome people to come back there” to see the sauce-making process, which he believes also contributes to a sense of completion of a fully transparent approach to food. 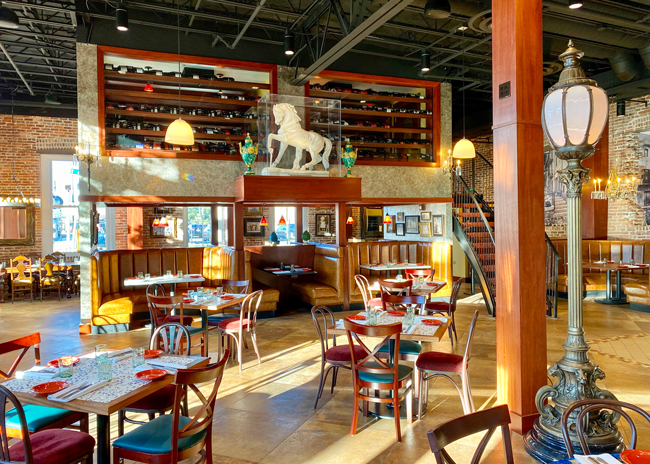 Open kitchens also present some opportunities for customer connections that might not always be possible in a traditional kitchen environment. Uno Immanivong, chef and owner of the fast-casual restaurant Red Stix Asian Street Food in Dallas, is a firm believer in transparency, defining it as “people being with people.” Red Stix has a glass-walled expo kitchen so customers can watch staff assemble their food and cook it on a grill. All the ingredients used to create Red Stix’s dishes are visible to customers. The restaurant keeps produce in a double reach-in refrigerator with glass doors; dry goods line the shelves. 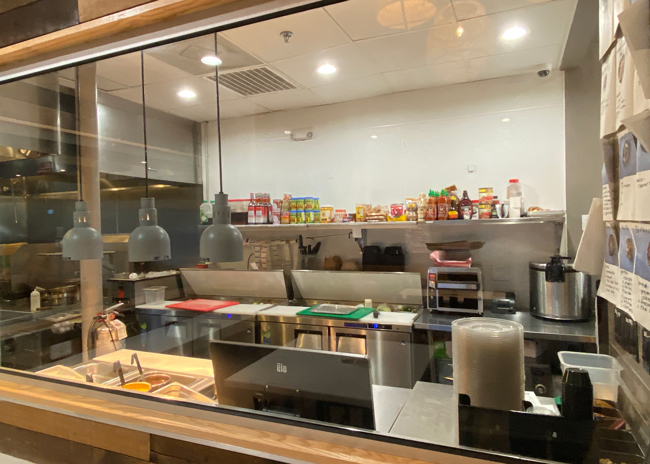 And unlike some restaurants, which keep canned goods on the shelves for months (or years) just to create atmosphere, “we actually use those ingredients,” Immanivong says. Seeing staff use those ingredients makes an instant connection with customers, she adds. “Other folks who have the same culture as I do will say, ‘Oh, yeah, that’s the same brand I use.’ ”

At Brazen, Scharpf says that having an open kitchen allows customers to see that the restaurant “walks the walk” when it comes to fresh preparation. “It really puts us out there,” he says. “If you walked by right now through the courtyard [next to Brazen], you’re going to see us breaking down a whole fish. You’re going to see us breaking down or putting away all the fresh vegetables. Being exposed on the front and back side has been a huge plus to us.” 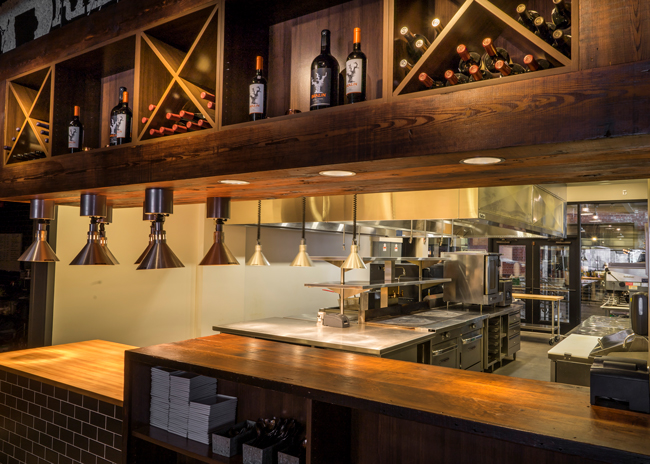 One of the big differences between open and “hidden” kitchens is in the appearance of the equipment. For back-of-the-house kitchens, where only the crew sees the equipment, function and performance take precedence over design or beauty; a few dings and dents don’t particularly matter. But when equipment is out front for customers to see, it not only has to fit the dimensions of specific spaces, which are normally very tight, but it needs to be presentable to look at as well. 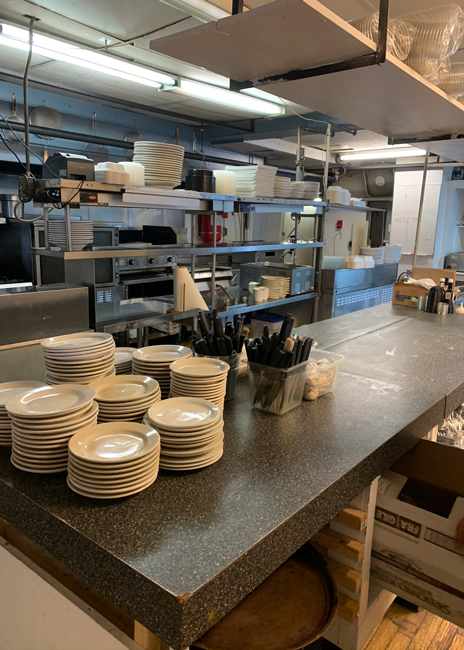 The informal setting of casual-seafood restaurant The Dip Net Restaurant seems to encourage customers to socialize more with staff, which the owner supports but at times can create challenges.The key to success is working equipment selection into the design process, according to Schwartz. “It requires collaboration,” he says. He has worked with manufacturers to get customized finishes on equipment planned for open kitchens. “It requires consultants to think outside the box a little bit, instead of just going to a catalog and opening up to the page that has six color selections and saying, ‘Here they are.’ ”

When setting up the Reserve Room chef’s counter, Scharpf says that his team took a somewhat different approach. Rather than seeking custom equipment to fit the space, they looked at what was already on the market. “We kind of customized our experience based around what equipment was available and how it functioned,” he says. “We then made what we needed to happen work with those pieces of equipment.”

And in some cases, equipment with a less-than-perfect appearance can work just fine. Zable’s casual seafood restaurant, The Dip Net, is “a seafood shack on the water that serves 400 people per day,” she says, and a casual environment is what customers expect. The broiler remains visible to customers, and “honestly, the broiler is pretty beat up,” she laughs. “So, we took the rustic look and ran with it.”

David Theriot, sales manager and consultant with the KESCO equipment sales and design firm in Pensacola, Fla., has seen some equipment that works especially well in open kitchen designs. “Through the restaurant designs I’ve done, prewired chefs’ counters are always appealing to the layman’s eyes,” he says, because they eliminate unsightly tangles of wires or utility connections. He adds that prewired counters meet most utility and sanitation standards at the time of installation.

Undercounter dishwashers have long been popular in open kitchen setups. Theriot points to new models that take the steam downward into the drain system rather than pushing it out into the prep area. “You open up the [dishwasher] chamber, and no steam comes rolling out,” making for a more comfortable working environment, he says. Also, some of these units have recovery systems that use the hot steam to preheat incoming water, thus saving money and energy. He also says that undercounter refrigeration units with worktops can serve double duty while saving valuable space.

From a strictly aesthetic standpoint, Theriot suggests pieces made of stainless steel. “Stainless-steel wall shelves are always nice to see in lieu of wire shelving,” he says, while “stainless-steel corner guards and small trim pieces can really make the difference in the appeal of an open kitchen.”

Despite the difficulties that a visible kitchen can sometimes present, it can heighten the drama of the dining experience, reinforce a restaurant’s concept or emphasize its food safety procedures. “Obviously, it keeps the team members on their toes,” Immanivong says. “They know there’s a certain level of expectation of service and cleanliness that’s required of them.”

Zable says that customers enjoy seeing the staff work together as a team and often compare the crew to a well-oiled machine. “They like to see that you have your teamwork down. People don’t want to see aggressive chefs belittling one another.”

The visibility of the kitchen reinforces an emphasis on authentic preparation, Gonzmart says. Customers “see the chef preparing the pasta, putting in the sauce and everything. It’s sort of mesmerizing. They see it like it was done in somebody’s home — except by professionals.”

There’s a benefit for employees as well, says Scharpf. “Often times, we think so much about the diner, and very seldom do we talk about the cook and the people who are in the kitchen and their mental health,” he says. “An open kitchen brings more life to you. You can see your guests; you don’t feel like you’re stuck in a dungeon. It brings you more joy.” 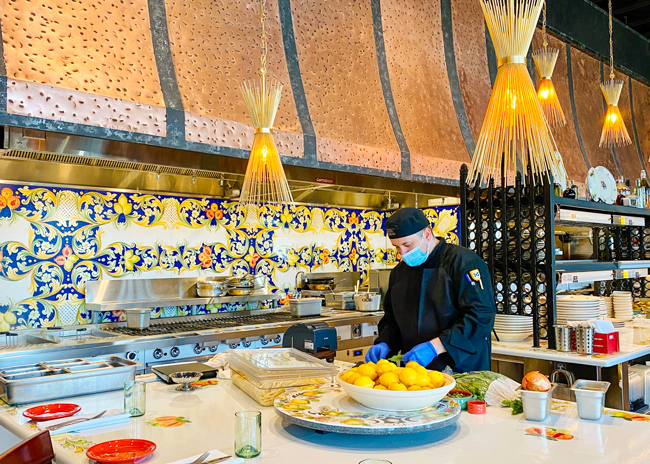 In a post-pandemic world, will diners want to see more of their meals being prepared in front of them to assure safety?

Eric Norman: Customers are going to want more transparency. I think the generation of Millennials and Generation Z are more invested in their dining experience. They want to know where their ingredients are coming from — are they sustainably sourced? So, I think those generations are going to drive more transparency in the kitchen and in the dining experience, not only in restaurants and college/university foodservice, but even down to the high school level.

Uno Immanivong: I think it’s going to take at least 12 to 18 months to get back to the 2019 way of thinking. We’re watching everybody these days; we’re going to restaurants with a little bit more scrutiny than we ever did before. I’m building out a second location, and we have probably allocated a good 25% of our kitchen space to think about how we make this more safe and sanitary.

Mark Moeller: I don’t think it’s going to affect it that much at all. We trust the restaurants we go to; we rely on health department scores — are they rated A, B, C? Even if it’s out front, we don’t know what process [the food is] going through. I don’t think there’s a need to see it to believe that it’s happening.

Kevin Scharpf: As a society, I would say that we have pretty strong short-term memories. Even going through this pandemic for what’s going to be a year, we’re creatures of long-term habit. I think a lot of people are going to be OK with going back [to restaurants], and I think you’re going to continue to see the growth of open kitchens.