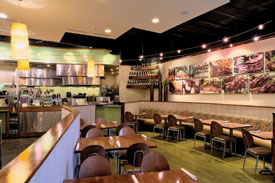 Step aside, fast casual. Atlanta-based Fresh To Order (f2O, for short) aims to create a next-gen niche with an approach its founders describe as "fast fine." The company's mission? To provide its guests with "incredible food, service and facilities in under 10 minutes, for around $10."

With six units thriving and a new franchising drive underway, f2O proves that chef-inspired dining and quick service are not mutually exclusive. The concept is the brainchild of Pierre Panos, who brings to the table extensive experience in both fine dining and QSR. He and his brother owned an upscale restaurant in their native South Africa before Pierre immigrated to Atlanta in 1993. Panos took over Atlanta fine-dining restaurant Brookwood Grill shortly after his arrival in the city and soon created Stoney River Legendary Steaks, a lodge-style upscale casual dining concept that he later sold to O'Charley's. Panos and his brother-in-law are among the top 5 Papa John's Pizza franchisees, operating more than 40 units in 4 states through QS America, the company Panos founded and where he serves as CEO.

"I'd thought about this for a long time, about taking the fine-dining food and taste profiles that I'd done most of my life and trying to bring it to the under-$10/under-10-minutes category," Panos says. "It's about enabling guests to eat fast but, at the same time, to have this incredible experience and spend considerably less for it than they might elsewhere."

The first f2O opened in midtown Atlanta in 2006 to rave reviews. Five additional units followed over the next three years: four in metro Atlanta and one in Chattanooga, Tenn. Then the recession hit full force. While the concept suffered less than many — thanks in part to its check average — further expansion was put on hold.

"We decided to spend that time working to perfect the menu, the operations, the food systems, to get our food and labor costs totally in line," Panos explains. "We focused for two years on getting everything right for the franchising and company expansion push that we had planned."

In early 2011, Jocelyn Blain, a seasoned restaurant development and franchising professional, was brought on as chief development officer to kick-start the franchising drive and help map out a strategic growth plan for expansion. Now well underway, that plan targets both new and existing markets. Two additional units are slated to open in Atlanta this month, including the concept's first non-traditional location in the Hartsfield-Jackson Atlanta International Airport. The plan takes f2O into select cities in the Southeast, mid-Atlantic and lower Midwest, including Charlotte and Raleigh, N.C.; Orlando, Nashville; Lexington, Ky.; Cincinnati; Indianapolis; the Washington, D.C., metro area and Baltimore.

"We started this year with the launch of our strategic real estate development plan," Blain says. "Our corporate market will always be Atlanta, but beyond that we've chosen markets based on a combination of demographics and psychographics. When we looked at the data, these cities immediately rose to the top, so that's where we're proactively looking for franchisees over the next 18 months or so."

To that end, Panos hosted menu-tasting events in Orlando, Nashville, Raleigh and Charlotte for prospective franchisees and local business and community leaders in

September. With plans to open at least 25 units in the Carolinas, he used the events to introduce guests to what he described as the "next evolution in fast-casual dining." COO Jesse Gideon, who is also f2O's corporate chef, was on hand cooking up samples of popular menu items to demonstrate both the elevated food quality and the speed of service. Similar events are scheduled throughout 2013 as additional franchising launches get underway.