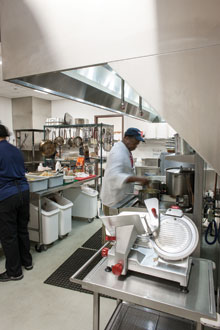 In addition to a main community and banquet room with a capacity of up to 300 people, the state–of-the-art center, set on 33 acres, also features exercise facilities, an auditorium, classroom and learning space, indoor and outdoor children's play areas, an indoor water park, a lap pool, and a professional-size indoor basketball court with riser seating mimicking the home floor of the Chicago Bulls, the city's NBA team. Overhead, a running/walking track encircles the court, while a nearby concession stand feeds basketball players and audience.

"The Salvation Army created this facility to get kids off the street and provide a learning and activity space for them," Schildkraut says. "It's also a place for seniors to go and have luncheons and dinners."

The main banquet center, which divides into three separate rooms, gets used by a variety of groups, ranging from corporations to church groups to schools to The Salvation Army's own programming. Two days a week, senior services use the space for box lunches and activities.

Schildkraut's team built a semi-banquet kitchen down the hall to support food production for the space as well as a smaller staging and pantry kitchen closer to the dining hall for extra support. The 1,500-square-foot main kitchen consists of a walk-in refrigerator, freezers, a dishwashing station, beverage and ice production. Schildkraut built in extra prep space for the lunch box preparation and other larger scale prep work.

The same commercial kitchen also supports a small first-floor café for casual meals and to-go service. All in all, the Center serves about 300 to 500 people per day between banquet and café service.

"There were no donations for equipment at the Community Center so we had to make sure everything we selected gave them the most bang for the buck," Schildkraut says. "TriMark Marlinn was awarded the job. We had maybe 1 or 2 alternatives proposed but they kept the final package to pretty much 98 percent of our specifications." There was no value engineering whatsoever, he notes. The result? A top-of-the-line kitchen that actually came in under budget — at $220,000 compared to $250,000.