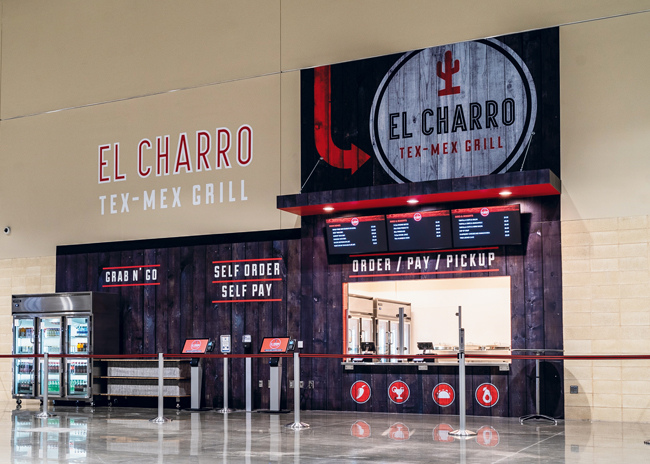 Photos by Freestyle CreativeThe single largest project in the MAPS 3 program, the Oklahoma City Convention Center (OKCCC) provides flexible usage space and occupies just over 500,000 square feet. The 200,000-square-foot exhibition hall can be divided into four separate spaces: 27 meeting rooms occupying 45,000 square feet; a 30,000-square-foot ballroom with 3 divisions; a 9,726-square-foot junior ballroom; and more than 10,000 square feet of pre-function space. In addition, the new Scissortail Park directly across the street provides an impressive front yard and building entrance as well as a lovely view from the third-floor balcony outside the main ballroom.

“The building has the latest technology and building systems, which was one of the top goals for the project,” says Kevin Koch, AIA, LEED AP BD+C, architect/principal at Populous in Kansas City, Mo. “The interior finishes are simple, clean and modern, and the support and service spaces tie the building together from the loading dock to the main kitchen on the top floor. The new convention center, along with the new park, new Omni Hotel and surrounding development will make Oklahoma City a sought-out destination for years to come.”

Venue and event management company ASM Global, headquartered in Los Angeles, manages OKCCC. “Oklahoma City’s chamber of commerce and the convention bureau wanted this city to be a major destination for conventions,” says Al Rojas, general manager, ASM Global/OKCCC. “The main goal is to have a facility that will elevate OKCCC to the next tier of convention destinations.”

“It was important to create a foodservice program that would serve the increased number of guests that the facility would accommodate through flexibility of design and effective equipment selections,” says consultant Richard Eisenbarth, FCSI, president emeritus, Cini•Little, Germantown, Md. 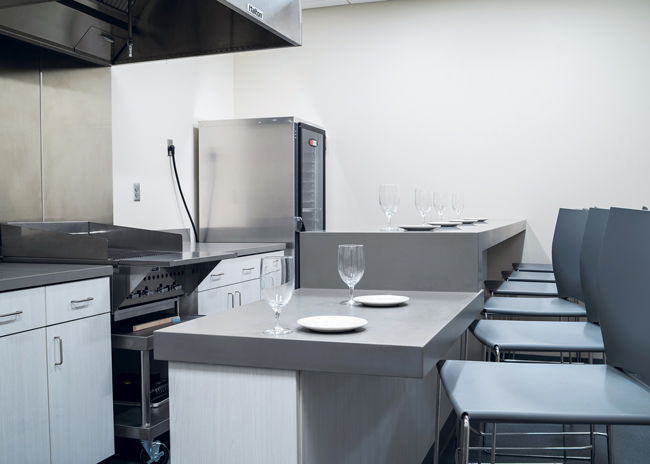 The tasting kitchen offers a space for event customers to watch the chefs and sample menu fare.Savor, a division of ASM Global, manages the foodservice. The foodservice areas feature a main banquet production kitchen adjacent to the main ballroom, including a tasting kitchen; two banquet support areas and a corridor for the ballroom, serving as beverage support and potentially plating areas to the remote areas of the ballroom; meeting rooms with finishing/plating and a beverage support pantry; a pre-function support pantry; a commissary to support concession kiosks throughout the exhibit hall; and a receiving dock, food and beverage receiving, holding and trash.

“Savor brings a sophisticated identity to the foodservice,” says Rojas. “The food here is extraordinary. It’s an example of how much convention center food has improved over the years. The Savor culinary staff bring talent and ingenuity to menus, which will make dining here a memorable experience.”

Due to COVID-19, staff have altered service practices. For example, staff no longer preset banquet meals; rather, they serve each course including salads, bread, entrees and desserts. This adds more service time and labor, but these steps play a necessary role in the center’s safety protocol. Staff also follow social-distancing requirements, and as a result, rooms have limited capacities. “In our 30,000-square-foot ballroom, for instance, we can seat 1,200 people,” Rojas says. “Now, we can serve 400 with no more than 4 to 5 people at a table. Tables are set 6 feet versus 3 feet away. We’re fortunate here to have those standards, and we have a sense of responsibility to operate safely.”

For meetings, plated or box meals are available. Buffets are not part of the service options, at least not yet. 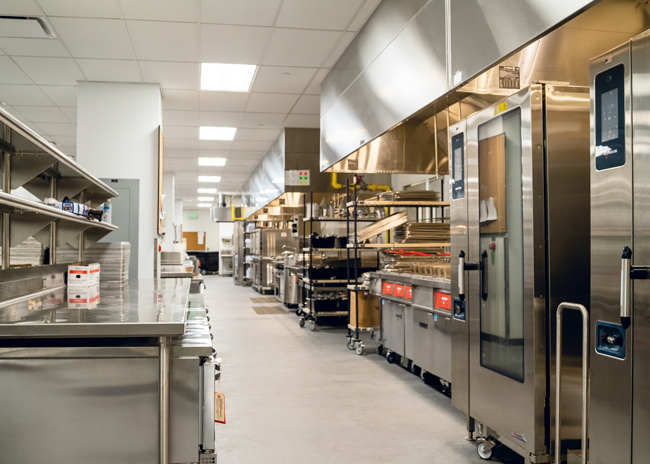 The linear lines of the kitchen allow staff to move easily around the space.

Food deliveries arrive at a receiving dock on the lowest level. After deboxing and cleaning, staff place deliveries in two walk-in coolers, a freezer and dry storage for a short holding time until other staff arrive to bring it up a dedicated elevator to the main kitchen on the fourth level. This lower level also contains an enclosed trash area and laundry room with a commercial-use washer and dryer.

After staff bring deliveries up to the fourth floor, they place them in four walk-in coolers and a beverage walk-in cooler, a walk-in freezer and dry storage.

“The kitchen features a good linear flow,” Eisenbarth says. “Product comes in from one side, is moved and processed. Soiled dishes don’t mix with prepared food.”

Marcel Martinez, executive chef and director of culinary, Savor/ASM Global, agrees. “Everything is positioned along linear lines, which I like because staff can move easily from one place to another and the flow is very clear,” he says. Martinez also likes the positioning of the chef’s office, which is close to the entrance where deliveries are brought in and near the garde manger and tasting kitchen. 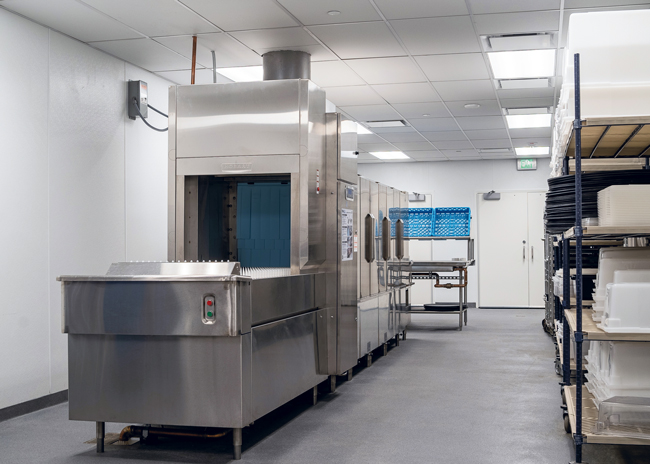 The dish room contains a flight-type dishmachine and designated spaces for dirty and clean dishware to avoid cross-contamination.Staff prepare garde manger with the support of a food processor and a reach-in undercounter refrigerator. For garde manger and baked items such as cookies, rolls and desserts such as cardamom rice pudding, dulce de leche cheesecake, three-layer carrot cake and three chocolate mousse cake, they use a countertop floor mixer, ingredient bins, a roll-in proofer and a roll-in convection oven.

The tasting kitchen allows chefs to cook for potential catering clients and discuss menu options. The kitchen contains small-sized commercial equipment, including regular counters and an ADA-height counter, a reach-in refrigerator, a heated cabinet, a 72-inch charbroiler, an exhaust hood, an undermount sink and a fire-suppression system. Clients sit at a table as they watch chefs prepare ingredients. A glass window offers views of the production kitchen.

The cookline contains two double-stacked convection ovens for heating Alaskan salmon after it is seared in the tilt skillet, as well as chicken breast with a roasted-garlic glaze, brown-sugar-and-thyme-rubbed king salmon and orange-and-coriander-crusted mahi-mahi. Staff use two tilt skillets for cooking rice, pasta and scrambled eggs and blanching vegetables; a 60-gallon tilting kettle for soups and stocks; a 48-inch range with 8 open burners to blanch asparagus that is charred in the salamander broiler and to prepare house-made steak sauce; a charbroiler for grilled flank steak that is finished in the convection oven and and used to place grill marks on soy-and-herb-marinated beef tenderloin that is finished in the convection oven. Undercounter refrigerated units sit beneath the equipment.

The other line includes a hot holding cabinet, a three-battery fryer, three combi ovens and an exhaust hood. Staff use the combi ovens for cooking brisket, pork shoulders, poultry, beef and vegetables. They also use the combis to smoke the beef and chicken for the four concession areas. 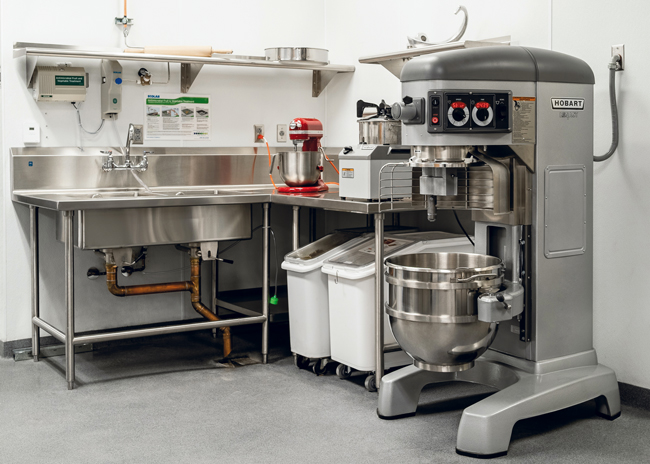 For large events, a plating and staging area with a mobile plating conveyor gives staff plenty of space to prepare menu items for transport to banquets and catered events. The kitchen has the capacity to prepare up to 11,000 meals for sit-down service. The operation also has enough carts to deliver food to various rooms simultaneously when necessary.

At the ballrooms, staff use the service corridor to stage hot boxes and service carts to expedite meal service times.

Staff take soiled plates and other service items to the long corridor for sorting and placement into soiled-dish transport cabinets. Staff next transfer the soiled items to the dish room for cleaning in a flight-type dishmachine. Clean dishes are then stored in the designated clean-dish storage room. 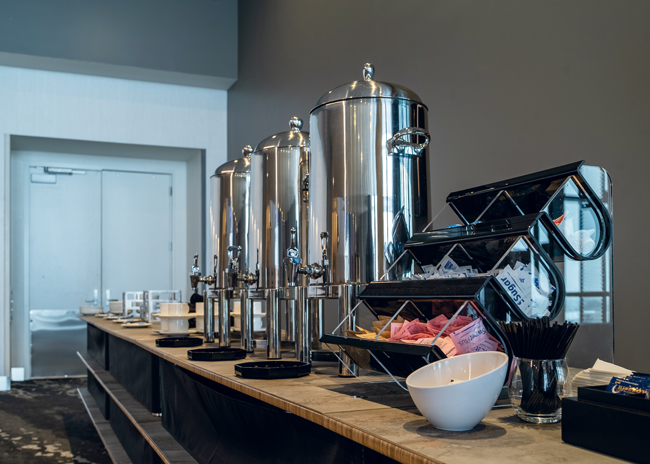 Breath shields separate customers from servers to establish a safer serving experience in what has become the new norm in serving spaces.

Named after Oklahoma City districts, concessions sit in the exhibit hall. A coffee concept concession operates on the ground floor. “We’re trying to attract attendees who like the normal concessions like hot dogs and chicken tenders, but we also offer much higher-end menu items that are healthy and meet dietary needs such as gluten free, meat free and allergen free,” Rojas says.

Bricktown Deli features sandwiches such as tomato, mozzarella, portobello and pesto mayonnaise, as well as Caesar salad and other salads, sides such as a crudité cup with za’atar turmeric hummus, and desserts such as carrot cake and strawberry cheesecake. 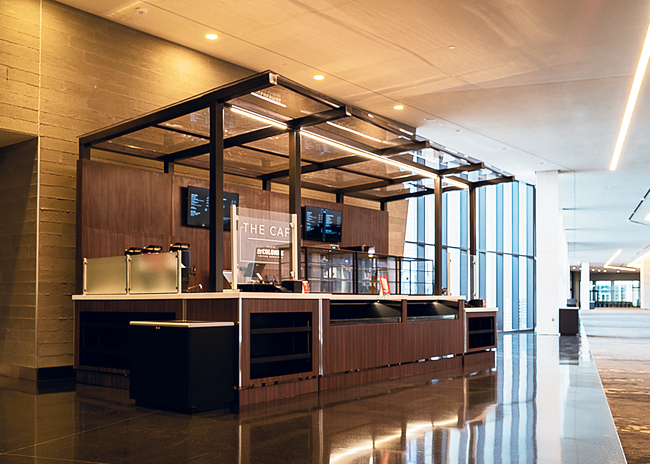 Fire Bros. Pizza Kitchen offers pies with pepperoni and another with cheese and seasonal vegetables, a gigantic meatball with arugula, asiago and balsamic-infused tomato sauce, chicken parmesan and other sandwiches, hoagies, mozzarella sticks with basil tomato relish and olive pesto, vegetarian soup, and desserts like tiramisu and panna cotta.

The Café, featuring La Colombe roasted coffee, offers coffee and other beverages as well as baked goods such as bagels with lots of toppings, assorted coffee cake, assorted Danishes, croissants, scones and muffins.

Grab-and-go menu items presented in display cases include wraps with meats and cheeses, salads, soups, a seasonal berry parfait with granola, and crudité cups with hummus.

“Concession operations have changed during COVID-19 to include tap-and-go ordering and paying,” Rojas says. “These items help to reduce concession costs and create a streamlined operation. Transparency is most important, and customers need to know about our safe food handling practices, which they can see and watch. Our job is to build consumer confidence. This is the situation for concessions, banquets, meetings and everything we serve.” 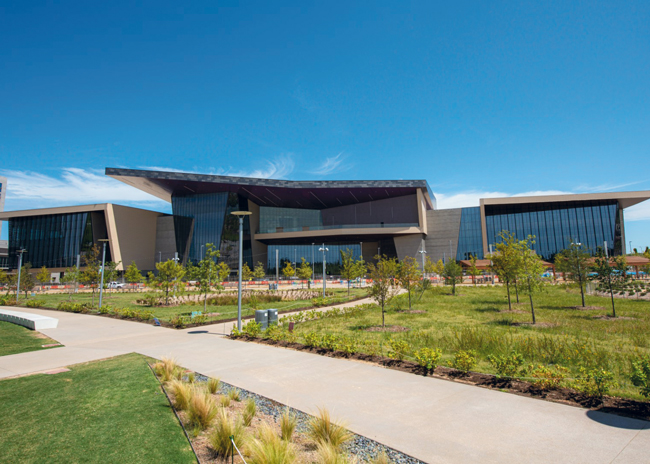 Scope of project: A new convention center with foodservice components that include a main banquet production kitchen, a tasting kitchen and exhibit hall concession commissaries

Scope of project: A new convention center with foodservice components that include a main banquet production kitchen, a tasting kitchen and exhibit hall concession commissaries

Daily transactions/covers: Up to 11,000 meals at a sit-down event 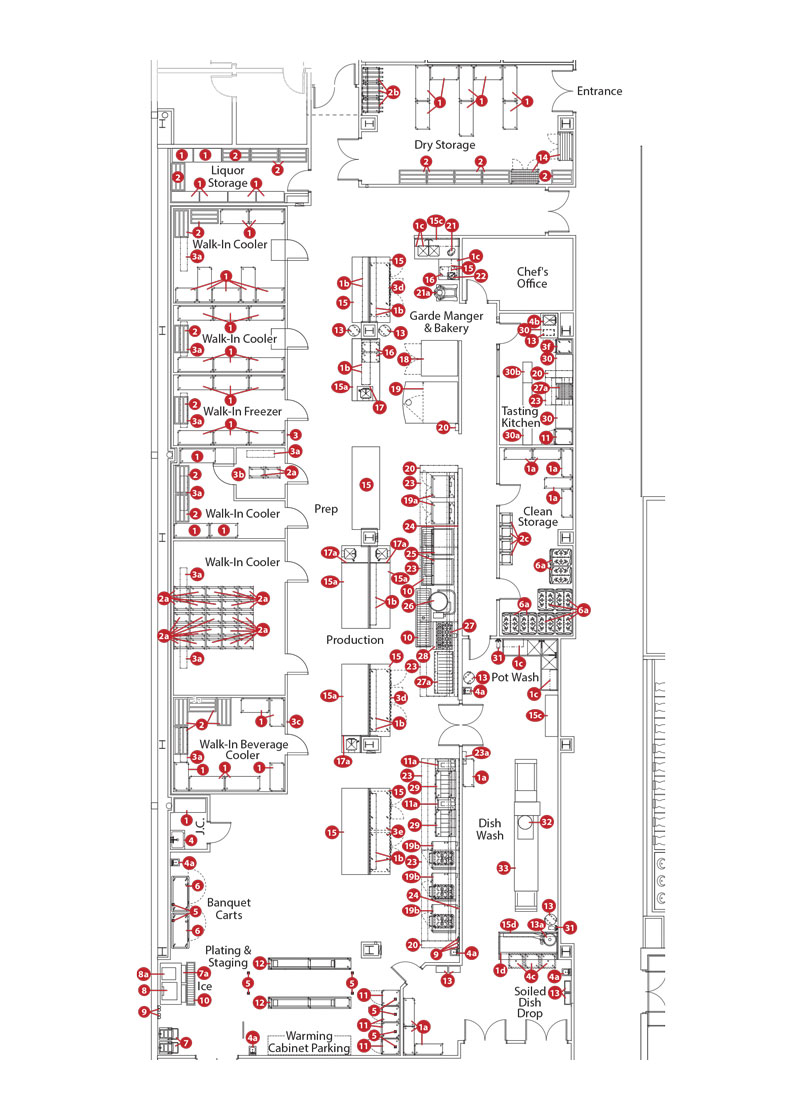 4b. Undermount sink with soap and paper towel dispenser

15a. Worktable with hand sink

15b. Prep table with sink

23a. Control panel for hood