Given Robert Harris’ role as an executive with one of the nation’s largest service agency conglomerates, you might guess his background is in business. In truth, he climbed the ladder through field work, joining what was then Ecolab Equipment Care as a completely green technician in 1995. 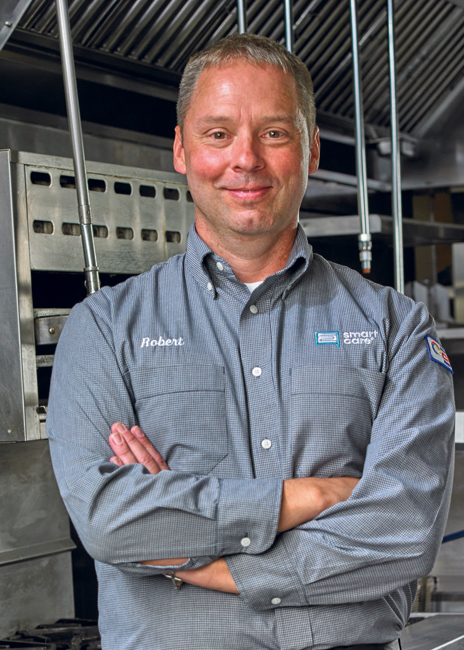 “I got out of the Marine Corps and didn’t even know that commercial kitchen equipment repair was a job. Even when I was told it was a job, I didn’t understand what that meant,” Harris recalls. “I thought I knew how to use a meter, thought I knew how to fix stuff. I learned very quickly from some guys in the industry that I didn’t know anything.”

Still, Harris took to the work and went on to earn his certification as a master technician from the Commercial Food Equipment Service Association (CFESA), a status he maintains to this day. After 15 years in the field, he moved into management at the branch level for Ecolab Equipment Care. Next came the leadership post with Ecolab Equipment Care, which was sold to Audax Private Equity in 2017 and rebranded as Smart Care.

Now, as vice president for industry partners and technician development, Harris is quick to point out that his job is less about developing his own ideas and more about taking the ideas of others and making them work. “We’ve got a chief operating officer and everybody else who has great ideas. I’m the guy who puts the puzzle together. Someone else has the vision of it.”

Much of these efforts center on leveraging the benefits and solving the challenges of a national-level service organization with more than 900 technicians. As head of industry partnerships, Harris’ portfolio extends far beyond striking warranty agreements with manufacturers. Analyzing information from the field, he helps determine which factories Smart Care should align with.

With these relationships established, Harris and his team sift through customer relationship management records to find patterns in the problems Smart Care techs across the country encounter. “If there’s a national customer, we ask [the factory] how we can cooperate together to get the customer’s problem fixed. Also, we may encourage the manufacturer to look a little bit deeper at this issue because you might be having it with other customers.” Similarly, he adds, manufacturer partners can give Smart Care a heads-up on equipment issues they’ve discovered, helping the service agency to provide better service to all its customers.

A more recent addition to Harris’ portfolio is the tech development side. From the 30,000-foot view, that involves the obvious: recruiting techs and making sure they have the knowledge and skill to repair kitchen equipment.

Smart Care, though, has asked Harris to take a deeper approach to tech development. The belief is that technicians should be able to do more than just repair equipment. They should be able to solve problems and soothe customers’ pain points, he says. That could include proposing alternative cooking methods when a unit is out of service and waiting on a part or simply moving cooking oil from the bottom of the unit to the fry pot when the pump is down.

While some of these skills can be taught, many of them are innate. Building a customer-oriented team, then, becomes a matter of hiring outgoing people with a customer-service and hospitality mindset, says Harris. “It’s okay to hire somebody who can fix their lawn mower and wire their garage but maybe doesn’t know that commercial kitchen equipment exists. It’s okay to hire those folks if they have the right attitude,” he says.

While expanding the pool of potential candidates certainly helps with the hiring crunch all service agencies face, it doesn’t solve the problem. To that end, Harris and the Smart Care team have developed career pathways for technicians. Too often, he says, service companies focus on onboarding techs over a period of several months but don’t tend to their future after that time.

So Harris’ team at Smart Care has developed a technician career path. This includes assessments at various points to identify knowledge gaps and five different service tech levels based on skill and knowledge benchmarks. With each offering financial rewards, this gives existing and potential employees a ladder to climb. This program has only been in place a year, so there’s no hard data on its success. But early feedback is positive, Harris says, with some new technicians saying it was one reason they joined Smart Care.

Guiding others on a career path is one aspect of the job that sits particularly close to Harris’ heart. Raised by a single mother in a poor part of town, he appreciates the foodservice industry’s ability to lift people up.

“This industry in general doesn’t care about where you came from. It doesn’t care if you are male or female or what demographics you associate with. All the industry cares about is if you can provide solutions for the customer,” Harris says. “My kids don’t have to worry about what I had to worry about growing up. They know that college is an option if they choose. If they want to go into the trades, they’ll be fully supported. This industry does that over and over again with service technicians. People who can use their hands and have a heart for taking care of somebody, taking care of our customers, can change their family tree.”

Harris’ desire to lift people up extends to his work with CFESA, as well. Currently a member of the CFESA board of directors, Harris started on the membership committee, where he worked to get member companies that were on the group’s sidelines more involved. This was largely done through the ambassador program, which pairs people who are active in the group with those looking to get more involved — another case of executing on someone else’s good idea, Harris notes.

On a more granular level, Harris has a reputation for always being willing to help other CFESA members out. “I grew up kind of rough, so it’s natural for me to want to help other people be successful,” he says. Don’t confuse Harris’ good-natured demeanor with a lack of competitive drive, though. “Do I still want to kick their butt? Yes, absolutely,” he says. “I think it comes down to execution in this industry. We all know the playbook. It just comes down to execution.”

Similarly, Harris is involved in Smart Care’s own charitable work. In these cases, the company’s different branches and member businesses form partnerships with their local food banks and community kitchens. These relationships are ongoing. Smart Care techs maintain the kitchen equipment, allowing the organization to focus on helping the people it serves.

Being present is the biggest one. I’m pretty impatient, and I’m always looking for the next thing. I think my children have helped me learn to be present or at least help me understand the effects of not being present.

If you could go back in time five or ten years, what decision would you make differently?

I probably would have started my own business 10 or 15 years ago. The qualifier would be family business. I really enjoy these family businesses we’ve been able to partner with or acquire.