By now, ghost kitchens seem like such a sensible business model that one might wonder why it took a pandemic to push the idea to the fore. But it did, of course, and in large part because consumer behaviors that were already shifting toward digital, delivery-focused solutions went from simmer to rolling boil virtually overnight. Still a novelty prior to 2020, ghost kitchens were specifically conceived of to meet those needs by tossing out the traditional restaurant playbook, going all in on off-premises channels and embracing new ways of operating that were cheaper, faster and more efficient.

Disruptors such as Kitchen United, CloudKitchens, REEF Kitchens, Ghost Kitchen Brands, Franklin Junction, Combo Kitchens and a host of others shaping the space continue to gain traction. Most models offer restaurant companies opportunities to set up shop in locations housing multiple mini, production-focused kitchens where they work shoulder to shoulder with other brands to get digitally placed orders prepared, packaged and out for pickup or delivery as quickly and simply as possible. Other models play matchmaker, pairing established and/or newer virtual brands with existing brick-and-mortar operations that have the infrastructure and capacity to generate incremental revenue by serving as ghost/host kitchens for those brands’ delivery programs.

And by now, any notions that these phenomena might be fleeting apparitions during a particularly chaotic time for the industry can be put to bed. Yes, there will be fallout, missteps and failures. But there really is no going back, and out of the chaos of quick pivots to new business models, order is emerging, a new order in which ghost kitchens play an integrated strategic role for many brands in many markets. Third parties and restaurant companies alike continue to evolve their strategies in the space, leaning on early learnings to tweak approaches, test new ideas, court new partnerships and, ultimately, dive in deeper. Here’s a snapshot of how three companies are doing just that. 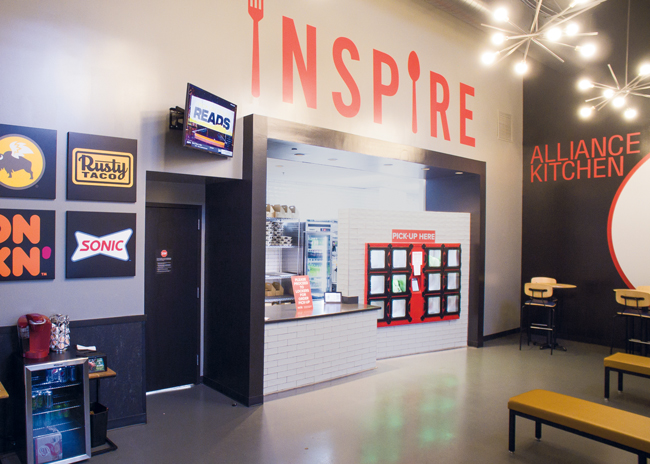 Various terms, including ghost kitchens, dark kitchens and virtual kitchens, continue to be widely used in the foodservice industry to describe essentially the same thing — kitchens operated for delivery only (and/or maybe some pickup). Operating models vary right along with the terminology.

The innovation team at Atlanta-based Inspire Brands carefully studied the ghost kitchen landscape and various models within it before choosing to take its own unique path. With Alliance Kitchen, which Inspire Brands opened in Atlanta last November, the company brought five of its seven brands — Arby’s, Buffalo Wild Wings, Jimmy John’s, Rusty Taco and SONIC Drive-In — together under one roof in a ghost kitchen designed exclusively for delivery and pickup.

“This type of internal, multibrand initiative is a first,” notes Vans Nelson, vice president of operations, innovation and profitability at Inspire Brands. “At our scale and with the number of brands that we have, its challenging to continue to increase store counts. In the ghost kitchen space, we saw a great opportunity to think differently and incorporate multiple brands into one. Through our learnings with Alliance Kitchen, we expect to gain much more flexibility to go into new and emerging markets, and to build out and test different spin-off operating models, whether for one, two, three or more brands in our own or in third-party ghost kitchen facilities. And it creates a pathway for entering markets where real estate is particularly challenging.”

At Alliance Kitchen, Inspire checked a couple of those boxes. It added Rusty Taco, which previously had no presence in that market, to the mix. SONIC, too, gained greater penetration in Atlanta, providing access to customers in an area not served by existing brick-and-mortar units there.

Housed in a 6,500-square-foot facility, Alliance Kitchen brands operate with shared technology, equipment, staff and infrastructure, boosting efficiency and lowering costs for all. Instead of each concept having its own separate station, workstations are communal and Inspire trains staff to fill orders for all brands. It’s a model that’s led to a more than 54% reduction in labor, 45% reduction in equipment and 71% reduction in HVAC tonnage and related operational costs compared to typical standalone restaurant units, according to Nelson.

The facility is larger than necessary, Nelson adds, in part to give Inspire the flexibility to add more brands in the future — Inspire currently also owns Dunkin’ and Baskin-Robbins — and in part to allow room for testing and validating labor-saving technologies and other 2.0 features. Among these, a new system that automatically transports ice from machine to beverage dispenser and a lobby designed with drivers in mind.

“One of the things that we saw lacking in the ghost kitchen space was an environment that’s comfortable and welcoming to delivery drivers,” Nelson says. “We felt we could innovate in this area, so we created a nice lobby with Wi-Fi, charging stations, TVs and Dunkin’ beverages available. We also put in a locker system that’s both heated and ambient to ensure a better guest experience.”

In addition to realizing operational savings and speed-to-market gains, this approach has generated big learnings as well. Nelson notes that the model requires significantly less square footage and, more important, it actually works. Sales goals relative to investment made and operating cost reductions gained are already on track to be exceeded this year. 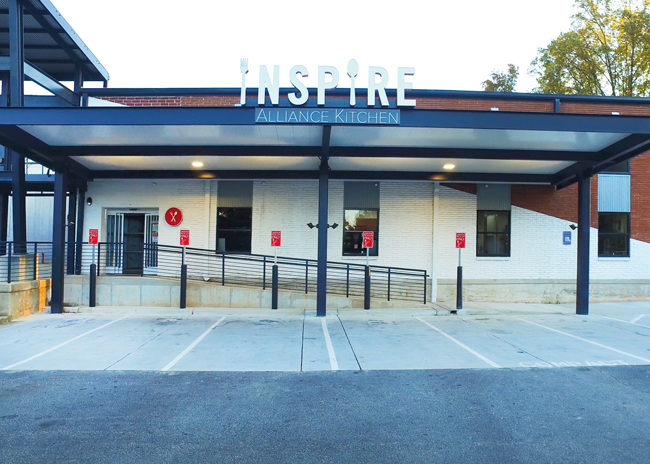 Inspire Brands’ Alliance Kitchen brings together five of the company’s brands under one roof in a ghost kitchen designed exclusively for takeout and delivery.

2.0 Move: Exit One Market, Restrategize Around Another

Quick-service and fast-casual restaurants have led the charge into ghost kitchens, but some casual dining operators are experimenting there as well. Smokey Bones, a full-service barbecue brand with 61 brick-and-mortar locations across 16 states and two virtual brands (The Burger Experience and The Wing Experience), opened its first ghost kitchen in a Kitchen United facility in downtown Chicago in mid-2020. A second, in a CloudKitchens facility in suburban Columbus, Ohio, followed in the spring of 2021. The chain’s early experiences in those markets will shape Smokey Bones’ ghost kitchen strategy moving forward, according to James O’Reilly, president and CEO. 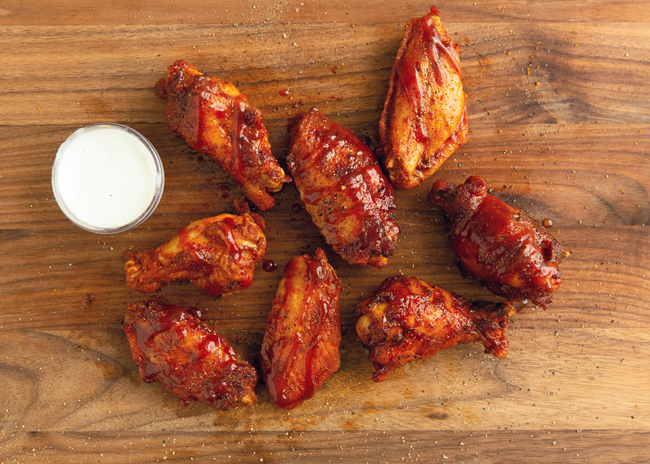 Smokey Bones’ early learnings now have the chain shifting its ghost kitchen market selection strategy to focus on trade areas in which it has strong existing brand awareness.In Chicago, where plans to enter the market were set prior to the pandemic, Smokey Bones had thin brand awareness. Its closest physical unit is 100-plus miles northwest of the city in Rockford, Ill. And with the pandemic emptying downtown Chicago office buildings, sales never took off. Ultimately, that unit was shuttered, and attention shifted to Columbus. There, Smokey Bones has multiple existing restaurants and strong brand loyalty, and the suburban location offered protection from the office exodus experienced in Chicago.

The chain’s management team, new to the brand in 2019, had quickly set building off-premises business as a key strategic priority. “We were the first casual dining brand to launch virtual brands, which have been additive to our revenue, and which have contributed significantly to our ghost kitchen success,” O’Reilly notes. “But we’ve learned about the importance of market penetration and access to consumers on these operations. We’re seeing very strong response to the ghost kitchen in Columbus, and it’s completely incremental to our business in that trade area. We were able to add more points of distribution for very low cost and without cannibalizing our existing restaurants.”

In its less than 500-square-foot ghost kitchen, Smokey Bones’ team fills orders primarily for delivery from all three of its brands’ menus. It’s a feat that O’Reilly calls a process engineering miracle and one that required sourcing smaller and, in some cases, different versions of the chain’s standard equipment. “Our virtual brand menus are limited and category-focused. They’re simpler by design. The Smokey Bones menu is somewhat reduced, but it was important to us to able to offer our guests the best and fullest expression of the brand that we could,” he says. “We had to find smaller smokers, smaller flattops, etc., in order to do so in this environment. We’re still learning, and the menu will likely evolve as we learn more about what makes the most sense for our ghost kitchen operations.”

Moving forward, O’Reilly adds that ghost kitchens will continue to play a role in Smokey Bones’ aggressive expansion plans. “We’re definitely looking for opportunities in this space,” he says. “But our thought process has changed. Our views today are based on what we’ve learned over the past 18 months. Right now, we see them as a way to infill and add incremental revenue in trade areas where we already have good market penetration and brand awareness. We think they’ll be most successful where customers already know us.” 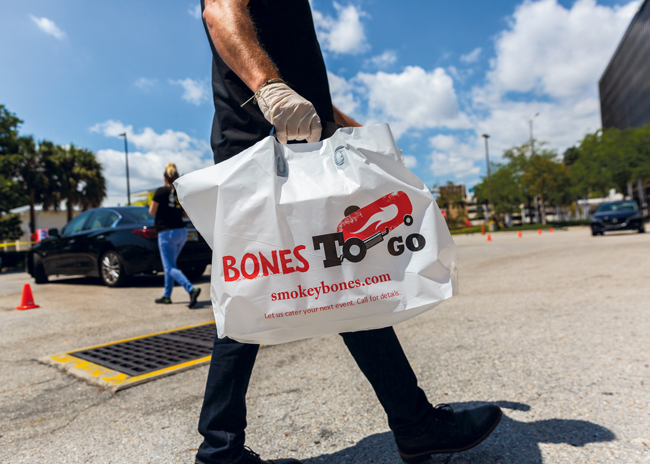 WOWorks’ legacy Saladworks brand has found a comfortable home in the ghost kitchen space. Saladworks got into the ghost kitchen game in 2020 via traditional licensing agreements with Ghost Kitchen Brands, which operates multibrand kitchens in retail and other nontraditional locations, and REEF Kitchens, which provides takeout and delivery from mobile units placed in parking lots around the country. 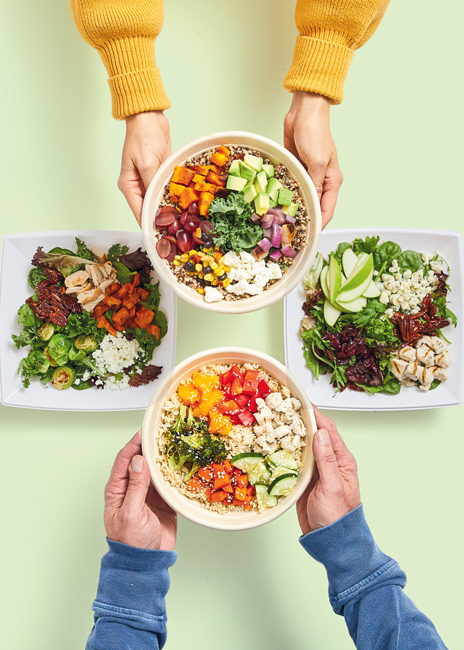 Convinced of the speed-to-market, cost-reduction and efficiency gains offered by ghost kitchens, WOWorks has since diversified its approach. The holding company, whose fast-casual portfolio now also includes Frutta Bowls, Garbanzo Mediterranean Fresh and The Simple Greek, last year signed on with Miami-based Combo Kitchen. Billed as the first ghost kitchen franchising firm, the company pairs established brands with existing kitchens. Those existing kitchens function as host/ghost kitchens for the franchised brands’ delivery and takeout programs, adding new revenue streams for the hosts and quickly increasing points of access for the brands at minimal cost.

“The traditional third-party ghost kitchen entry was an easy and effective pandemic play because nobody was going out,” notes Brian Farris, chief development officer at WOWorks. “But it has continued to work well. Our strategic thinking evolved from, ‘OK, is this a stopgap play to satisfy the dynamics of the pandemic, or is it a go-forward strategy?’ It’s definitely a go-forward strategy. We’re bullish on ghost kitchens, and the combo/host kitchen approach is a natural evolution of that solution.”

“Combo Kitchen is kind of a cousin of the traditional franchise model,” Farris explains. “They function like an area developer might, franchising our brand, in this case to WingHouse, which now produces Saladworks menu items exclusively for takeout and delivery. Combo Kitchen acts as our agent and provides a layer of support that allows us to grow with this model quickly and efficiently.” 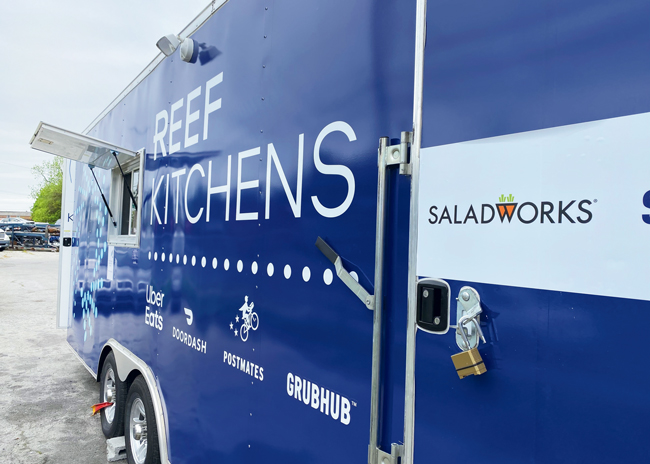 To date, WOWorks’ activity with Combo Kitchen and ghost kitchens, in general, has centered primarily on Saladworks. That’s because it’s a relatively simple concept that requires no particularly unique ingredients or equipment. But Farris says the company is now actively looking to place all four of its brands in these platforms as an infill strategy and, even more so, to gain traction in new markets targeted for possible brick-and-mortar development.

The keys to success, Farris adds, boil down to simplicity and training, particularly in combo/host kitchen situations. “You’re going to be a smaller percentage of sales than the primary streetside brand that they’re operating,” he says. “You need to narrow your menu down to core items that sell well and are easy to train for. And you have to develop really good training materials that make sense to the employees in that location so they can deliver a great product that consistently meets brand standards.”