Among national and regional restaurant chains today, those not making plays in the virtual brand and ghost kitchen arenas are quickly becoming exceptions. But small, independent operators and entrepreneurs continue to find a home in ghost kitchens too, shifting their focus from that most fundamental barometer of success — butts in seats — to clicks on apps. Here’s how Ghost Truck Kitchen is tapping in and what they’ve learned by crossing over into the virtual sphere.

Founder Andrew Martino has taken his Ghost Truck Kitchen concept from 6 concepts to 12 since it opened.

It’s a model that Martino calls a hybrid ghost kitchen. Rather than set up in locations off the beaten path or operate as a delivery-only kitchen, he sought a location at which he could welcome neighborhood traffic for takeout as well. Two blocks from a commuter train station, Ghost Truck Kitchen took over an existing restaurant site. Its hood and walk-in refrigerator were useable, and Martino realized he could expand the kitchen from what had been a 30-seat dining room.

“As we’ve grown and learned what people like and what our kitchen can handle, we’ve reconfigured the space and our flow to handle more brands and more volume,” Martino says. “We’re sharply focused on offering variety, cooking from scratch and making pickups efficient for drivers and customers. Even though it’s small, we’ve been able to do that here.” 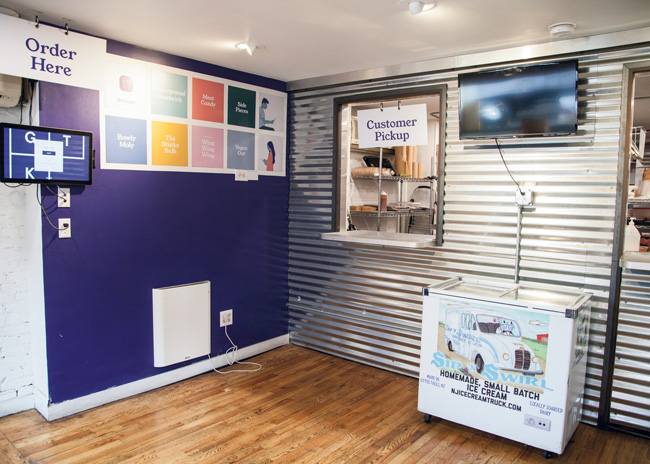 Being diligent about cross-utilization of both food and equipment has been a key to success, according to Martino. “We’re able to run all 12 concepts using the same stations, line and staff. The different menus use a lot of the same ingredients, but maybe there’s a different seasoning or sauce which puts it into another category. And we’ve found ways to manage things like keeping vegetarian items separate. At our salad station, for instance, we added a couple of induction burners so we can keep veggie items off the main grill.”

Minimizing food waste has factored into development as well. The top seller for bowl brand Bowly Moly, for example, is teriyaki fried rice. Created as a result of the staff seeing too many eggs going to waste, it now outsells the other bowls by 4 to1. 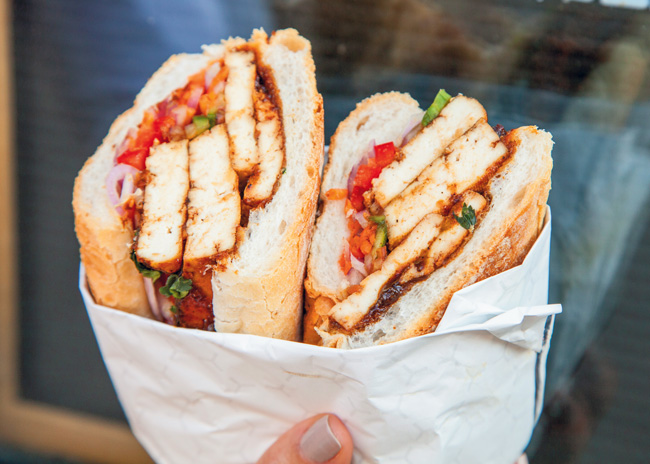 The underground SANDWICH concept is one of an array of offerings in Ghost Truck Kitchen’s virtual brand lineup.The most popular concept, All We Do Is Wing Wing Wing, was hatched from the team’s belief that an existing wing item, initially offered under another concept, was strong enough to anchor a sub-brand.

Being able to make quick pivots in the virtual restaurant world is part of its appeal, Martino adds. “We get to play with a lot of stuff and try out a lot of ideas. If something doesn’t work, it’s not a huge loss. We haven’t invested in a lease and decor and printed menus. It lives digitally, and we can easily remove it and try something else.”

But making changes too quickly or frequently can work against companies trying to create lasting virtual brands, he cautions. Concepts need time to gain traction, and operations have to stay focused on quality and service. With the virtual restaurant space now exploding, Martino says he’s doubling down on quality and maintaining brand standards.

“The pandemic accelerated acceptance of virtual concepts, but a lot of what’s going on now won’t last,” he predicts. “Too many brands aren’t putting enough care into what they’re doing, and they have the potential to drag others down with them. There will be a lot of flashes in the pan, but we’re trying to build a sustainable business that becomes part of every neighborhood where we operate.”

Moving forward, Martino plans to open a second, newly built location this fall and is developing additional brands. Ultimately, he envisions multiple locations, likely including some with a bit of on-site seating, and a diverse, flexible portfolio of 30 to 40 virtual brands.