In a small but growing number of beer-centric operations, there’s no longer anything standing between the customer and a cold one — no server to wait for, no angling to get a bartender’s attention. Customers simply walk up and tap their own, free and empowered via technology to control their beer-loving destinies. 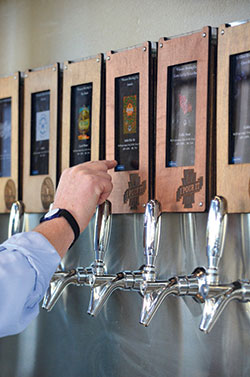 While they’ve been around for many years, self-pour beer features — from walls of taps to tabletop taps to smaller mobile units that can go just about anywhere — seem to be having a moment. Leading manufacturers report exponential increases in demand over the past three to four years. And why not? Self-pour beer offers speed, convenience and a new and different experience for guests, who have the opportunity to sample an array of brews with minimal risk or investment. For operators, the systems can impact labor, reduce waste and, thanks to back-end technologies, make gathering valuable, actionable data easy. They also take the onus of monitoring guest consumption off the bartender, reducing potential liability issues.

And they’re not just for beer. Self-pour features now include wine and craft ciders as well as specialty cocktails and kombuchas.

While convenient and high in cool factor, self-pour beer features aren’t simple plug-and-play propositions. Operators who have made them work emphasize the need for smart design, merchandising and meticulous maintenance, as well as for sufficient labor to ensure a positive guest experience.

Mark Slattery opened First Draft Taproom & Kitchen in Denver in July 2015, introducing that market to what he says was, at the time, the largest pour-your-own system of its kind in the country. He expanded the concept in 2018, opening units with local partners in Los Angeles and Minneapolis. The original 2,500-square-foot Denver location features a 25-foot long beer wall with 40 taps, while Los Angeles, at 5,000 square feet, boasts 70 taps and Minneapolis, at 4,600 square feet, has 46 taps. Each offers a wide variety of craft beers as well as cider, wine and kombucha.

The self-pour systems at First Draft completely replace traditional bartender-serviced bars. “We hit the ground running with the mentality that we would create a unique experience, rotating flavors, producers, breweries and products,” Slattery says. “With so many great craft products being produced today, we wanted to highlight the tasting experience. Guests can pour as much or as little as they want and try a bunch of different things.”

Many of the most prominent tap wall systems today operate in similar fashion. When patrons arrive, the staff checks their IDs and swipes a credit card to start a tab. Guests then receive either a card or an RFID wristband that, when swiped or held up to a tap, activates it for self-service. Each guest pours as much or as little as they want, with the system tracking pouring totals. Upon reaching the standard limit of 2 pints (32 ounces), the card or wristband no longer works. Staff may reactivate the card at their discretion. The system tallies the charges by the ounce, with prices typically ranging from 30 cents to well in excess of $1 per ounce for higher-end craft brews and cocktails.

With guests cognizant of the fact that they will pay by the ounce, waste becomes extremely low, Slattery says. “We have almost no waste. We do our caretaking to make sure proper temperatures are maintained and that there’s not foam pouring out,” he says. “But we’ve found that people really don’t overpour.”

While some operators report labor savings as another key attraction, Slattery says that’s not necessarily the case. “We found out pretty quickly that we don’t find any labor savings,” he says. “We have to have people checking guests in and getting them set up to use the system. And while it’s true that we don’t have traditional bartenders, we have staff out front helping guests at the taps. So instead of being behind the bar with their backs turned pouring drinks, they’re out at the beer wall interacting with customers. On busy nights, we have employees whose whole job is to troubleshoot and help people figure out where to scan or maybe how to pour. And with so many choices on tap, people have a lot of questions and often want guidance. Proper staffing is an important part of the equation. That’s in part why we refer to the system as self-pour versus self-service: We do provide a high level of service right up to the point of the guest pouring their own. Along with good food and a fun environment, it’s part of creating a great experience.”

Sal Rincione, who with his wife, Samantha, founded St. James, N.Y.-based Crave Hot Dogs and Barbecue in 2018, agrees that self-pour beer features are not necessarily labor-free propositions. The burgeoning fast-casual concept began franchising in early 2018 and by late January 2020 had five franchised units open across North Carolina, Texas, Georgia and Oklahoma. Crave plans to open another 15 locations by year-end, taking the brand into Colorado, Louisiana and Florida.

Measuring from 2,000 to 2,800 square feet, the chain’s prototype includes 50 to 80 seats and is incorporating drive-thru. A self-tap beer wall serves as a key feature in every location, with franchisees having the autonomy to determine which beers to feature — mostly local craft brews, but usually including one or two mainstream domestic options, as well as a red and white wine, according to Sal Rincione.

“I saw the beer wall idea in a place on Long Island,” Sal Rincione says. “It was an aha moment as we were developing Crave. We wanted to create an experiential brand with great food and a great selection of cold beers. The beer wall fit the concept perfectly.” 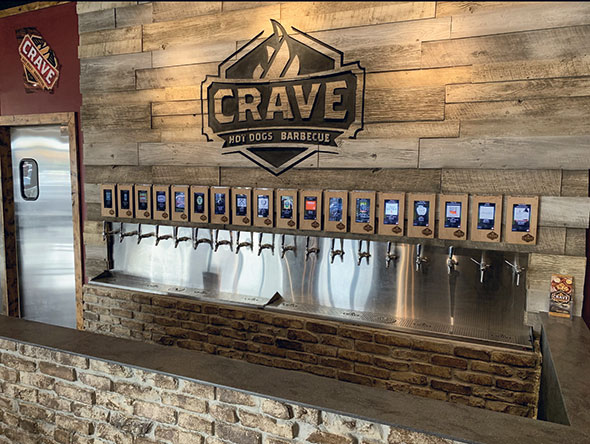 Most Crave beer walls measure 15 feet and average 18 to 24 taps, overseen by a beer expert dubbed a “tapologist.” “There’s a lot of information available to the guest about each beer on a touchscreen above the tap. It shows information on the brewery, the beer’s flavor notes, alcohol percentage by volume, bitterness rating, price per ounce, etcetera. But our tapologists are a critical part of the experience,” Sal Rincione says. “They talk to guests about the beers and offer suggestions for selections that might go well with various food items. And they’re there to guide guests who may be unsure how to use the system or tap their own beer.” While Crave is a food-first fast-casual concept, some 15 percent to 20 percent of guests, on average, use the beer wall during their visit, he notes.

In addition to properly staffing self-pour beer walls, Sal Rincione and Slattery agree that positioning for high visibility and smooth traffic management are keys to their successful operations. And where possible, they say, tap walls are best set directly in front of a dedicated walk-in cooler, where kegs are stored and beer lines run short distances to the taps. Both also advocate constructing the walls, whether straight line or peninsula style, directly in front of or around a walk-in cooler. The benefit, they say, is less beer wasted during regular line cleanings and more efficient temperature maintenance because long lines require glycol to keep the beer cold from keg to tap.

Dedicated walk-ins should be generously sized to handle the required kegs and back-ups, as well as to provide easy access for staff. That requirement will determine how many taps are realistic to include.

That’s a lesson Slattery said was among the first his team learned after opening the original First Draft location in Denver, where the cooler supporting the 25-foot, 40-tap wall is just 5 and a half feet deep. “We put racks in and went vertical for more storage,” he says. “But in our later locations, which feature centrally positioned, three-sided self-pour systems, we almost doubled the width of the coolers behind them. We learned that we need a lot of kegs in there, especially when we went to even more taps in the new locations. If the cooler is too small, you have to start stacking kegs on top of each other and it’s harder for staff to walk between them and get access for changing things out.”

Another lesson learned from that first experience in Denver, Slattery says, was to allow ample space for guests to gather around the wall. “In the beginning, we had high-top tables set pretty close to the beer wall, thinking that guests would kind of act like that was the bar and sit and watch the action at the taps. But we got a little too busy and it started to feel crowded, so we ended up taking those tables out and putting a couple of communal tables in a little farther back from the taps to open up some space. Overall, on busy nights, guests have easier access and can serve themselves faster with this system than at a traditional bar or if having to wait for a server.”

Sal Rincione adds that at Crave, which positions its beer walls in the middle of the front of house, a crowd around the beer wall is a good thing. “That’s the beauty of the wall – we want it to be crowded, so that’s why we center it and make it a big focal point. The more people at the wall, the more money we make.”