Like that new-car smell that signifies something brand-new, freshness permeates throughout the roughly 900-square-foot kitchen at the Jewish Community Center (JCC) of Greater Columbus in Columbus, Ohio. As the winner of FE&S Kitchen Storage Makeover contest, the facility’s kitchen received a refresh over a four-day period in early August.

“It was an old kitchen with a lot of hard-to-get-to areas,” says Matan Gutwaks, J Catering and rentals manager at JCC. 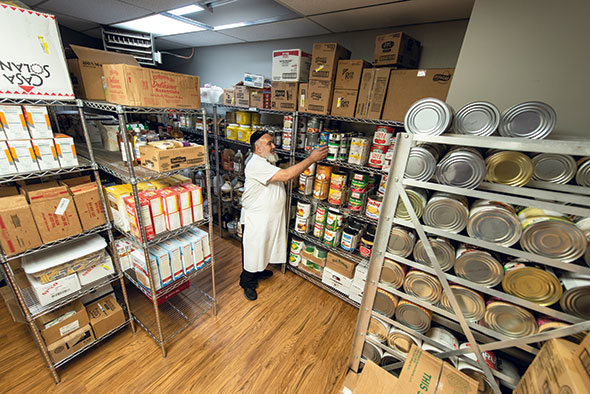 Photos by George C. AndersonOriginally designed as a support kitchen for the preschool when the building opened in 1983, today the kitchen supports a daily lunch program for 400 on-site preschool students and approximately 80 seniors. The kitchen also supports a kiosk-style cafe and a seasonal poolside snack bar. Additionally, the JCC supports an off-site Jewish preschool with another 25-plus lunches as well as a catering business that handles orders ranging from kosher boxed lunches for local businesses to private events for up to 300 people.

“That kitchen was never designed for what it is doing today,” says Brad Wasserstrom, president of The Wasserstrom Company, an equipment and supplies dealer in Columbus, Ohio, that has supported the JCC from its inception. “They are doing far more — and far more variety — now than the kitchen was ever designed to do. The fact that they are able to do this was always amazing to me.”

Wasserstrom’s president formed a connection to the JCC early on, when he attended preschool there and then spent summers at the JCC day camp and the pool. His wife was also a teacher there for a time, and his children attended preschool at the facility. “It’s a special place for myself and the entire community,” he says. 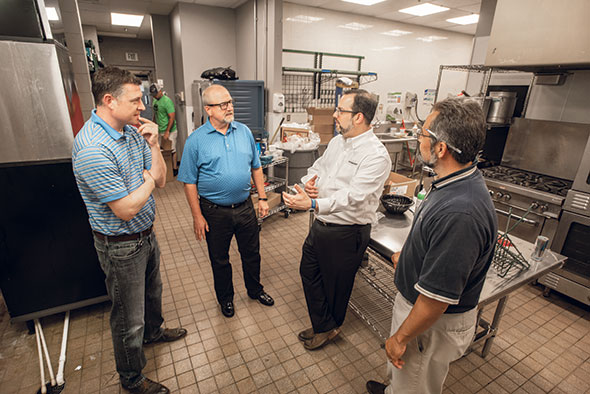 The kitchen matured right along with the Wasserstrom president over the years. Output also grew, although the physical space and organizational components did not. Wasserstrom likens it to watching the 1962 animated TV show The Jetsons. He recalls the memorable closing scene of that show, where George Jetson couldn’t quite keep up with the moving walkway he was on and eventually got sucked into the conveyor. “It became a bit like that,” Wasserstrom says of the JCC kitchen space. “That downward spiral of disorganization, where it’s hard to catch up because the world keeps moving. The JCC had gotten to that point. Things began piling up on top of equipment.”

There was talk of a full remodel of the space at one point. “We actually talked about renovating the kitchen space years ago and even had some early preliminary plans drawn up,” Gutwaks says, adding that the desired new kitchen space would have come with a nearly half-a-million-dollar price tag. “It became a lofty number,” he says.

The high cost deterred the project. Instead, Gutwaks focused on prioritizing what he could to improve the kitchen over time, including purchasing equipment at auctions and seeking equipment donations.

Back-of-the-house funding represents a challenge many operators face as kitchens tend to fall lower down the list than customer-facing areas. “It’s the not-so-sexy back-of-the-house space,” notes Gutwaks on why project funding tends to land elsewhere. 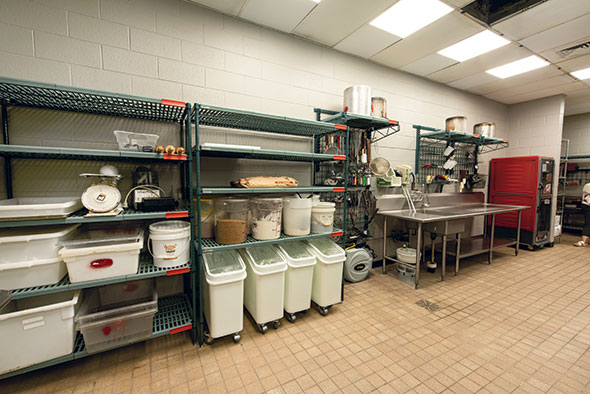 New storage components opened up space in the JCC kitchen and increased accessibility to items.

It’s something Wasserstrom sees happening at other foodservice businesses as well. “If you only have a few thousand dollars to spend, people will spend it where it makes the most impact for the guest and simply make do with what’s in the kitchen,” he says. In the case of a nonprofit like JCC, donors tend to prefer to see funding go toward a new gym, for example, than a behind-the-scenes space, he adds.

Fast forward to the day news arrived that contest judges selected JCC as the winner of FE&S’ Kitchen Storage Makeover Contest. “We were ecstatic,” Gutwaks says. “At the same time, in the back of my head, I was thinking $50,000 worth of components isn’t really that much next to the half a million that was in my head to redo the whole space.” 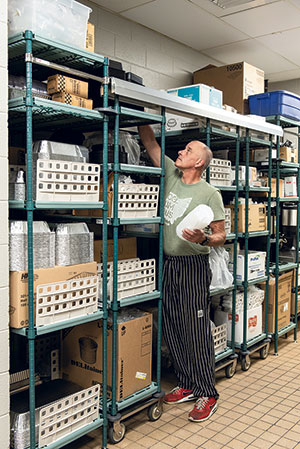 The JCC staff can locate items quickly; new components such as this overhead track shelving unit increase efficiency.In the end, the assessment and project team that took charge of the refresh did not disappoint. “It’s so much more than I thought it would be,” Gutwaks says of the finished space. With an improved workflow and an optimized space, the kitchen team has a new outlook on work space. “This facelift revived everything. I feel like we are now almost beholden to a higher standard in the kitchen space. It’s inspiring.”

Four different areas of the kitchen were outfitted with new storage components: the main prep area in front of the cookline, the walk-in cooler that sits directly behind the cookline, the prep and sink spaces that are situated around the outside of the walk-in cooler and the adjacent dry storage room. Specific organizational components added include wall grid shelving systems, four glass rack dollies, a drying rack, a dunnage rack and track shelving units that maximize space for paper products.

Gutwaks admits that, before the refresh began, there were some concerns and reservations about handing the reins over to an outside project team. “It’s not always easy to give up the authority over your kitchen space,” he says. That hesitation faded quickly when conversations began to center on how the kitchen team wanted to function. “The project team then told us what we need to get that done — and gave it to us,” he adds.

A lot of work went into cleaning up the space prior to the arrival of the install team. The process of shuffling pieces around to make room for new units even led to a discovery. “We found an old hot water line behind one the shelves when we were moving things around,” Gutwaks says. “So, we bought a high-pressure, hot water hose. At 100-feet long, it reaches the whole kitchen, and we can now spray down the kitchen at the end of the shift with soap and water to clean everything easier.”

Physically moving pieces of equipment to rearrange existing kitchen components and clear out unnecessary boxes prompted a deep cleaning of the entire space. Old shelving moved out of the space and was replaced with shiny new pieces, many of which are mobile. “We’ve made things so much more accessible,” Gutwaks says. “A lot of the shelving units have wheels, so we can move them aside easily to maintain the cleanliness of the space.

“We found places for things, so there is virtually no clutter or boxes in the kitchen space,” Gutwaks adds.

Functionality is the name of the game in the refreshed kitchen space. Every piece, right down to each spatula, now has a specific home. That creates efficiencies as staff will spend less time searching for what they need.

An extra component came into play when assessing the needs for the JCC kitchen since the facility operates as a kosher kitchen. “The rabbis came in when they found out we were doing the makeover and provided input,” Gutwaks says. For example, in the original design, the two main prep tables in the center of the kitchen were connected, as they had always been. But, with the opportunity to redesign the space, the rabbis suggested creating space between those tables. 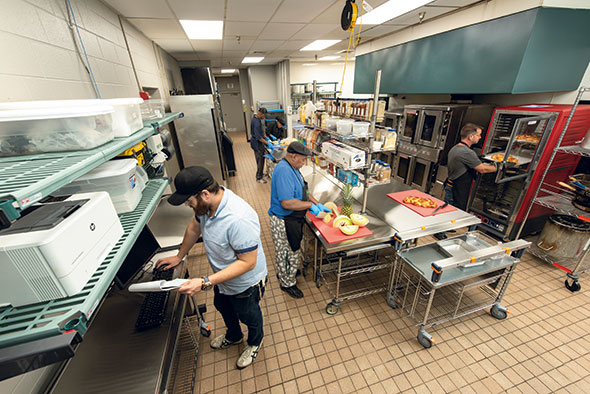 Now, a small aisle divides two separate kosher prep tables, which creates a greater distinction between the meat and the dairy sides of the kitchen. “The aisle has the added benefit of giving some mobility to the room,” Gutwaks says.

The old prep line was often too small for staff to actually do their prep work. That left them continuously searching for any open spot that could serve as additional prep space, such as a cart or countertop. Two new stainless-steel worktables now triple the work space. In addition, staff can use two newly added mobile carts — one for meat and one for dairy — as additional prep space. The mobile carts nest under the larger prep tables, leaving them out of the way during off-peak periods.

Larger pieces that were added include a mobile heated cabinet and four insulated food carriers. The dry storage area, once an overloaded space with rusty shelving, now has a new floor to match its shiny new shelving. While cleaning that room in preparation for the install, the JCC team replaced the old flooring.

The kitchen space includes a walk-in cooler and two small reach-in freezers; a walk-in freezer and smaller walk-in cooler in the basement store overflow. “It’s not ideal to have a kitchen span between two floors,” Gutwaks says. “We just have very limited space, so we store as much as possible in the basement.” Two more refrigeration units sit upstairs on the back loading dock. 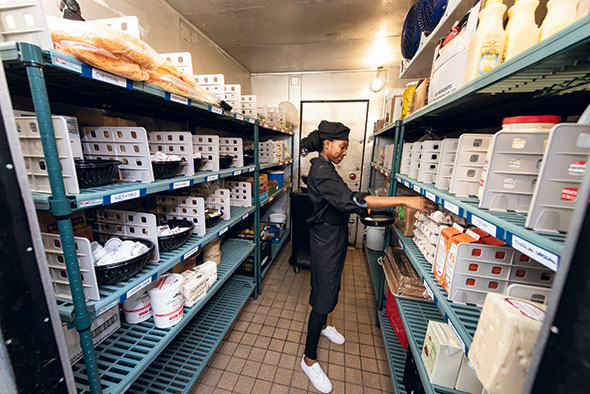 The reorg now enables staff to quckly and easily find what they need in the walk-in cooler.

While the new storage pieces take center stage in the kitchen, old items did not wind up in the trash pile. Instead, Gutwaks continues to evaluate what he can repurpose. For example, rethinking and reorganizing the kitchen space led to product consolidation and taking a reach-in freezer out of the main kitchen. 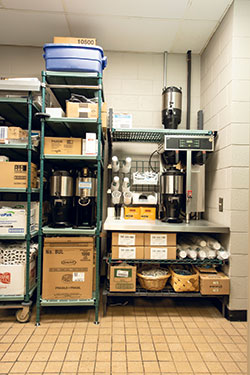 New storage components created a more efficient work space around the coffee area in the back of the house.“I might be able to tackle some things differently now,” Gutwaks says. “For instance, we could repurpose that reach-in freezer in the snack bar.”

Adding refrigeration to that area may allow Gutwaks to fulfill some seasonal requests from those who wish to dine on salads during their visits to the snack shop at the pool.

To date, the equipment lineup at the snack bar includes a grill, a fryer, a snow cone machine and a roller grill. Menu items include hot dogs, burgers, chicken sandwiches, black bean burgers and other traditional poolside items. Most are cooked to order.

The pool snack bar takes a back seat to the daily lunch programs for the preschool and senior center. That main kitchen operates with a minimal equipment package, which includes a range, a fryer and a pair of combi ovens. That suffices since the main kitchen does not operate cook-to-order service; staff prepare bulk items from set menus for the JCC kitchen’s two primary foodservice support areas: preschool and senior lunches.

“One of the benefits of the kitchen renovation is that certain things will now be easier to do and will take less time to do. No one has to find a place for something anymore,” says Gutwaks.

What started as a dysfunctional kitchen space now functions as an efficient workspace with everything in order and a workflow setup that maximizes every inch of space. 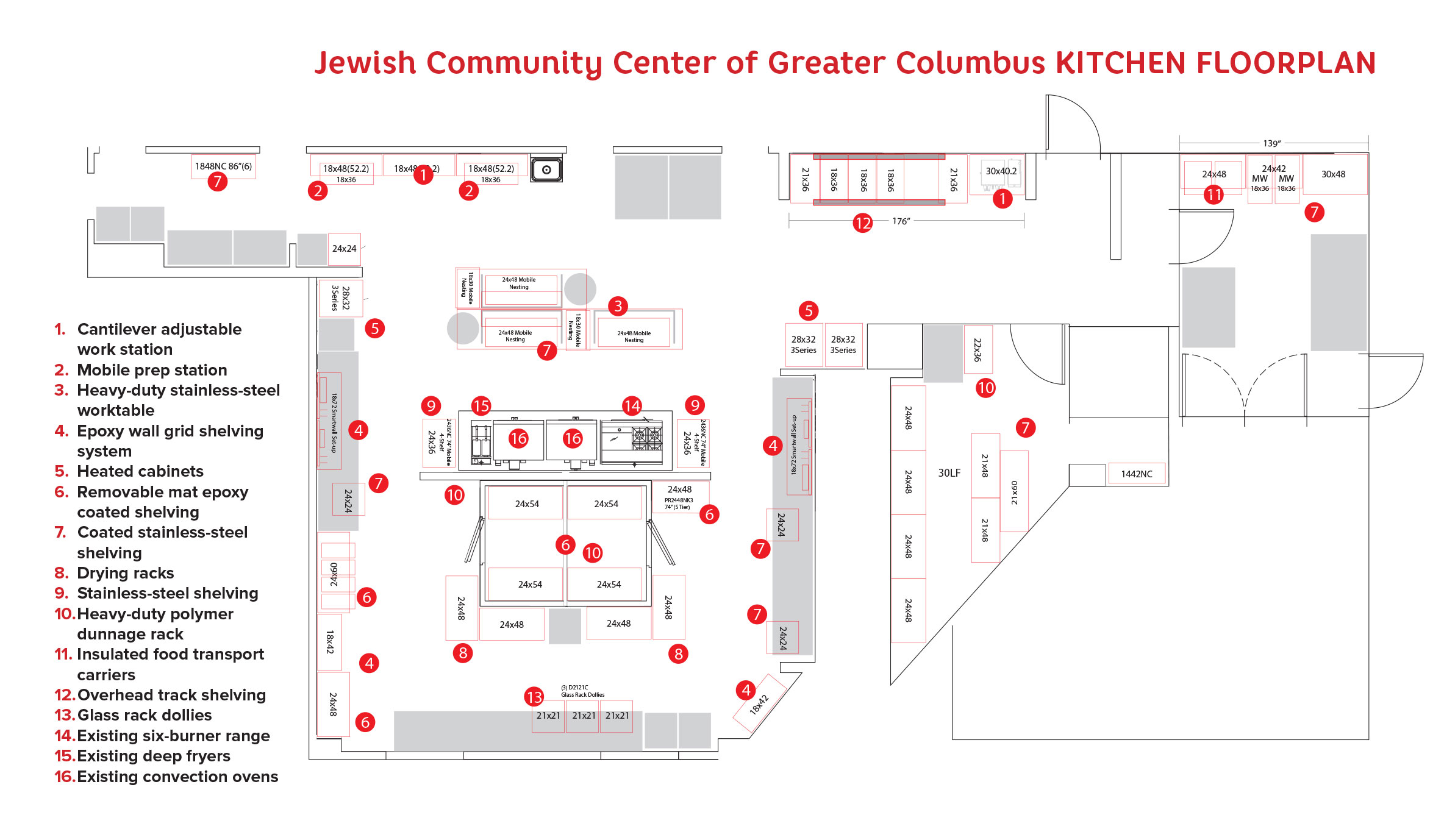