Although the IHOP marketing campaign that positioned the iconic pancake chain as a burger restaurant (the P in “IHOP” changed to a B) was a publicity stunt, the company notes that it did result in a younger consumer demographic taking notice. Intent on drawing the attention of the lucrative Millennial demographic, Denny’s has remodeled its stores and ramped up its social media presence. 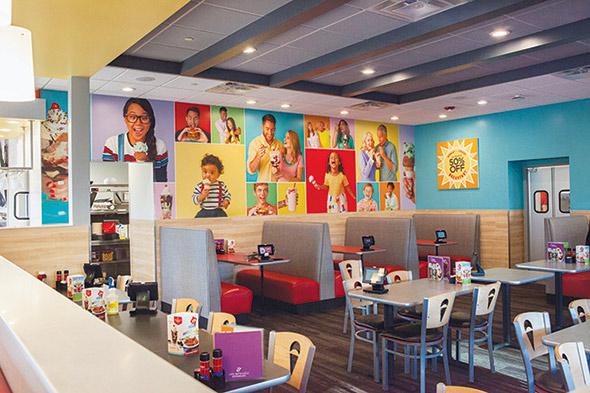 “Family dining is at the lower end of full-service with a more affordable price point,” says Aaron Allen, founder/CEO of Aaron Allen & Associates, a consultancy based in Orlando, Fla. “There’s a stigma around family and casual dining, with the big concern being relevance and the attractiveness of investment [in these concepts].”

While that has led many chains to remodel and to revamp menus, it may not be enough to offset family dining’s lack of creativity. Also not in the segment’s favor: It has been slow to adopt digital technology and investors.

“[Family dining operators] have reached into the basket for limited-time offers, promotions and publicity gimmicks, but the economic model is not attractive for operators, so they are pulling back,” Allen says. The opportunity for brands like IHOP and Denny’s, he says, is to go after a new generation of families and kids. But, he adds, that has to include a change in menu that entices them to get out of the house. “Adding delivery isn’t necessarily the answer; the proposition has to change.”

Friendly’s, which has 150 locations along the East Coast, relies on its ice cream fountain to draw in the family dining crowd, much like a cocktail bar might for other chains. “Our fountains are very busy serving dining room guests, with a walkup area for takeout orders,” says Dennis Pfaff, the chain’s chief operating officer. “It’s almost like a bar in that it’s a separate section of our restaurants.” 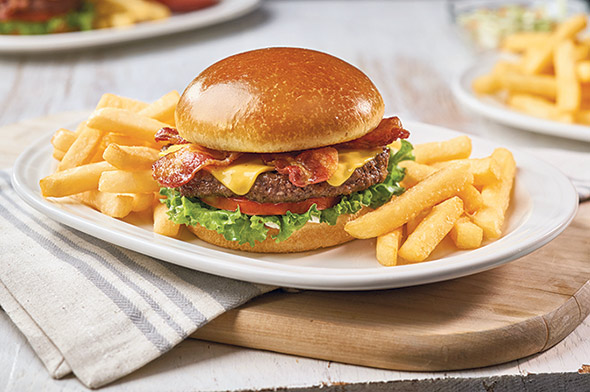 Friendly’s has focused on a family-friendly menu with affordable prices. The chain recently increased its bacon cheeseburger from 4.75 ounces to 6 ounces.

For restaurants like Friendly’s, which has been in existence since 1938, nostalgia also keeps generations of families coming back. “From a family perspective, we bring the ability to sit down with family and put the world aside,” Pfaff says. “There is definitely nostalgia with the brand.”

Another option for enticing consumers to the family dining segment: entertain the kids. Pizza concept Stella Barra connects with kids through its dough. “The chef gives the children a ball of dough, then walks through how to properly stretch it into a pizza shape,” says Corey Milner, a Stella Barra partner. Kids make their own pizzas at the counter directly across from the chefs. The chef adds either a red or white sauce, then the kids can break up the mozzarella ball and choose from 20 ingredients to top the pie. 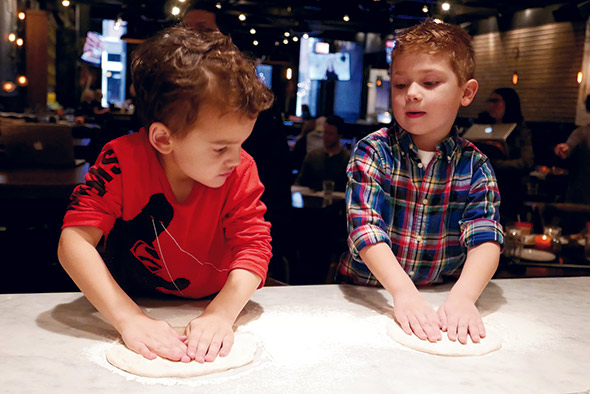 The chef’s counter at Stella Barra consists of a space where kids can make their own pizzas.

“Our chefs interact with everyone, which makes it fun,” Milner says. “We can accommodate four kids at one time, and there are usually lines at the pizza making stations on the weekends.”

A Lettuce Entertain You concept, Stella Barra has four locations: two in California, one in Chicago and one in Maryland. The concept was created by chef/partner Jeff Mahin, a baker who created a pizza dough with a consistency similar to a French baguette — crunchy on the outside and chewy inside.

In terms of equipment, Milner says the electric pizza oven acts as the star of the show and remains on full display. At its 100-seat Chicago location, the kitchen encompasses 25 percent of its 3,000 square feet and includes a salad station with fryer for calamari and fried Brussels sprouts appetizers as well as walk-ins, freezers, an ice cream machine, a full pastry department and a cookie counter. The larger Hollywood, Calif., location spans 6,000 square feet and includes 180 seats.

“We tried a single-tier menu and found that this wasn’t what kids wanted,” Pfaff says. “The children were ordering from the adult menu, which added cost to the bill, so we went back to the two-tier kid’s menu last January.”

For menu ideations, in the summer the chain invites 25 members of its “BFF Club” and their parents to gauge what items it should offer. “Instead of us trying to figure out what kids want, we’ve held these focus groups the last two years,” Pfaff says. “This has led to little tweaks in our kid’s offerings as well as the two portion sizes.”

Friendly’s best-seller for kids is the chicken tenders, which come on a stick for fun and easy eating. Mac and cheese with hot dogs is the next most popular dish.

At press time, the chain had just completed a new version of its two-tier kids menu with different portion size options that Pfaff says has been very well received. “Sales have increased since its inception,” he says. “While most of the industry is cutting costs, we’ve added to our portions and kept prices the same.”

For example, Friendly’s increased its burger size to 6 ounces from 4.75 ounces and added 20 percent more fries to its orders. It also has upgraded to a larger chicken tender with a higher-quality batter.

Its summertime offers, the Triple Decker Burger and the Monster Shake Challenge, have also helped attract a younger demographic. Those who can eat both items receive a T-shirt and 20 percent off coupon for their next visit. Friendly’s also plans to launch a new breakfast menu this fall.

“Probably the most interesting thing we’ve seen is the popularity of home delivery since we started working through third parties, like Uber Eats, Grubhub and DoorDash,” Pfaff says. “I’m surprised by the amount of sales it’s added to our system.”

Stella Barra has also seen an uptick in its delivery orders as well as interest in its weekend brunch buffets, where kids 10 and under eat free.

“As a family-friendly restaurant, we get early diners, which helps fill a void many operators face in attracting those wanting to eat earlier,” Milner says. “Family dining is its own animal, and not enough places focus on it as they should. It has made us very successful at a time when many restaurants are struggling.”

Digging in to Family Friendly

Parents with little children look for comfortable places to dine, says Ron Forsman, general manager R.J. Grunts, a Lettuce Entertain You restaurant located near Chicago’s Lincoln Park Zoo. The 48-year-old R.J. Grunts offers a children’s menu with options that include quesadillas, grilled chicken or hot dogs  all of which come with a package of animal crackers, an homage to the nearby zoo. 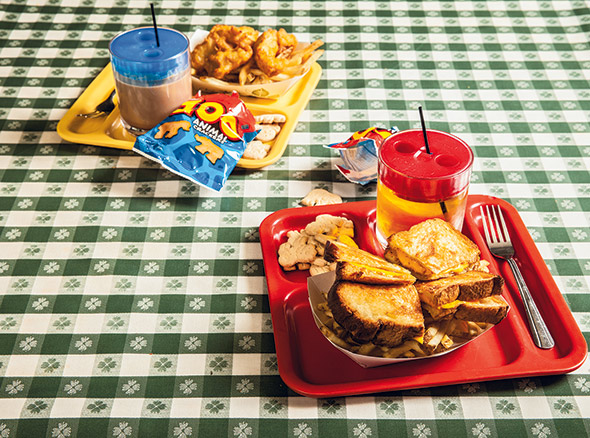 Kid’s meals at R.J. Grunts always include animal crackers, an homage to the nearby Lincoln Park Zoo.

“While certain restaurants are not built for kids, we embrace the younger set with free stroller lock-ups, lots of high chairs and booster seats and a good family atmosphere,” Forsman notes.

Tradition also helps keep some family dining operations in business. The Old Spaghetti Factory (OSF) has been a tradition for many families since it opened in Portland, Ore., 50 years ago. With 43 locations, 5 of which opened in the last 2 years, the chain has weathered the country’s birthrate decline.

“People are getting married later and not having kids or having them later in life, which is slowing things down,” says Chris Dussin, OSF’s chairman. “We may lose those who have older kids, but when our former customers get married and have kids of their own, they will come back due to their memories and occasions here.” With locations encompassing between 12,000 and 14,000 square feet OSF easily accommodates large groups and family gatherings.

“We appeal to big groups for special occasions and birthdays, which we do a lot of, putting everyone together in the main dining room or a separate room,” Dussin says. “Our larger size also has been beneficial in sourcing locations, since it can be difficult finding tenants for these bigger facilities. For this reason, there’s more opportunity for us to expand to more locations.”

In addition to the standard coloring books and crayons, the kid-friendly atmosphere includes a trolley car for kids to sit in.

“The portions and meals we serve kids are conducive to the amount they can eat, and we’re always asking our guests what they want to see done differently,” Dussin says. “We’ve tried to evolve with healthier options over the years with carrots or apples on the side, but most kids want pasta.” Broccoli topped with cheese is the most popular side dish.

“Guests view this as a dining experience, where they don’t have to cook and clean up,” Dussin says. “The family dining segment is changing. Ten years ago, chain restaurants like TGI Fridays, Applebee’s and Olive Garden were very popular, but now the segment is shifting away from that kind of dining.” For OSF, he says a big change has come in the lunch daypart. He believes that lunch customer now frequents fast-casual and supermarkets for the noon meal.

Looking ahead, Allen anticipates more closures and consolidations among family dining concepts, yet he remains positive. “The industry will reinvent the category,” he says. “Innovation is critical, and the lack of it is why the segment is shrinking. A big part of reimagining family dining will be accommodating Millennials and kids to reflect consumer preferences.”