As consumers continue to eat cleaner and more healthful foods, operators are taking notice. And action.

Today, it might even be challenging to find a restaurant — and that includes QSRs — without a healthy option on the menu. While oatmeal at McDonald’s or grilled chicken at KFC may seem the antithesis of these brands, the healthy menu offerings expand each chain’s demographic and accommodate many consumers’ current eating patterns. 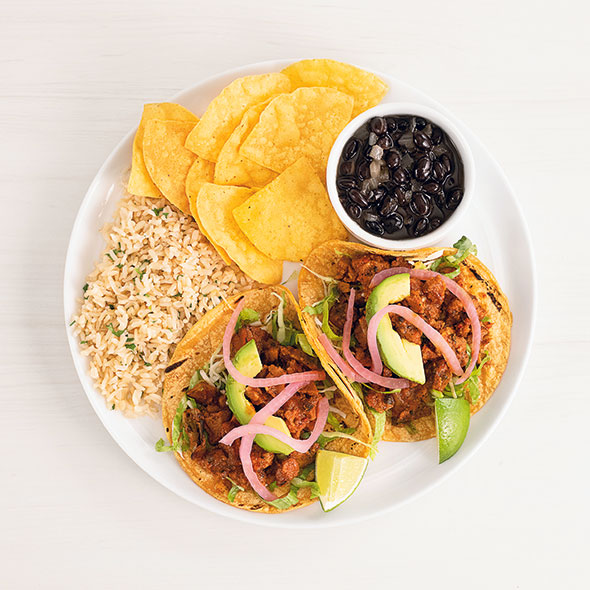 The healthy offerings journey has come a long way, and Veggie Grill CEO Steve Heeley has seen that growth firsthand.

“When we first opened, we were competing against very small, mostly vegan restaurants, and the food just wasn’t good,” Heeley says of the 11-year-old vegan chain. “We are innovators in plant-based eating, which has gone from the fringe to the mainstream with a lot of transformation.”

Veggie Grill taps into the growing trend in healthier dining. According to the National Restaurant Association’s 2018 Restaurant Trends Survey, 8 of 10 restaurant operators say customers pay more attention to the nutritional content of the menu items than they did two years ago. This feeds directly into the decision-making process, with 65 percent of consumers saying the availability of healthy menu options makes them more likely to choose one restaurant over another. In addition, 40 percent of adults say they would choose a restaurant that offers diet-specific food like vegetarian or gluten-free options, over another restaurant that doesn’t.

A number of new developments continue to fuel the growth of healthy eating, with plant-based foods serving as a standout. Even quick-service chains and major meat product manufacturers see the potential of the plant-based market. “Both Burger King and McDonald’s are working on [plant-based] dishes, and Tyson is developing its own plant-based meat substitute,” says Charlie Candelas, principal at Pilot Light Hospitality, a restaurant consultancy based in Manhattan Beach, Calif. “We’re not sure if it’s a fad or here to stay, but people are moving away from high-fat diets and animal products to plant-based foods.”

Also, the move toward more global flavors and ethnic dishes, including Asian and Mediterranean, continues to fuel the popularity of plant-based foods and dishes. “With the plant-forward trend, there is so much opportunity for Asian and Mediterranean dishes that, by nature, are more plant based,” says chef David Kamen, assistant director of CIA Consulting at The Culinary Institute of America in Hyde Park, N.Y. “This lifestyle or the healthy eating trend is easier for folks to get on board with because people don’t have to deprive themselves. They can indulge in big, bold flavors and still have interesting ingredients in their dishes. They’re doing it in the context of these cuisines with grains and legumes.”

Candelas agrees, adding that a variety of ethnic seasoning and spices, such as kimchi and turmeric, continue to grow in popularity.

Plant-based proteins are nothing new for LYFE Kitchen, which stands for Love Your Food Everyday. This fast-casual chain focused on healthy dining is the brainchild of two former McDonald’s executives, Mike Roberts and Mike Donahue, along with Stephen Sidwell. LYFE Kitchen opened in 2011, then sold to Chicago-based L3 Hospitality Group in 2018. A former franchisee of the brand, L3 now operates three LYFE Kitchen locations in Chicago. 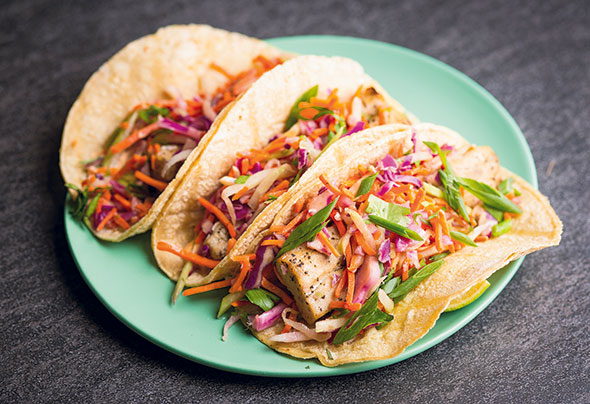 Mahi mahi tacos are a customer favorite at LYFE Kitchen. 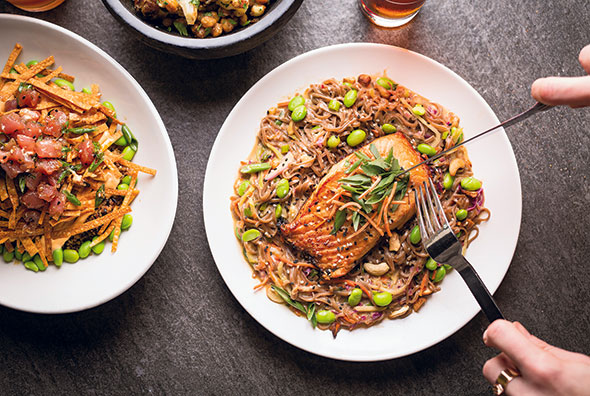 LYFE Kitchen focuses on healthful ingredients, such as salmon and soba, thin noodles made of buckwheat.

“It’s not new to have local tofu and other plant-based protein on our menu, but consumers are more aware of it and interested in exploring it,” says Emily Paulsen, L3 Hospitality Group’s director of marketing and sales. “Even meat eaters are giving it a try.”

LYFE’s menu consists of small plates like roasted cauliflower with crispy chickpeas and sweet corn chowder, entrees such as vegan beet poke and a spicy chicken and black bean bowl, and various flatbreads, including turkey pepperoni and roasted mushroom with goat cheese.

Veggie Grill offers plant-based items such as Banh Mi Salad, which features crispy or grilled tofu, and Barbacoa Tacos, made with a plant-based protein. Some menu items change with the season. Veggie Grill approaches menu development with consumer flavor and food preferences in mind first, then engineers the menu item as a plant-based dish. “We’re constantly innovating and working with the food manufacturing community to find new, interesting and cravable products and bring them to market. We’re innovators who are constantly testing new products,” says Heeley. “We’ve found the market has to come to you — you can’t come to the market because it’s the consumer who decides to eat better [who is driving a product’s success].”

The audience for plant-based foods and healthy eating overall keeps growing rapidly, Heeley believes, particularly among Millennials and Gen Z demographics. “To those generations, it’s just the way to eat,” he says. “They have access to plant-based foods that weren’t available four or five years ago.”

Veggie Grill will add 8 locations this year to its current 32 stores. Operating markets include California, Oregon, Washington and Chicago. The chain added an investor partner, Brentwood Associates, in 2016 to expand the brand on the West Coast and now to the East Coast, a focus for 2019.

Challenges remain for foodservice operators, among them understanding the cooking process with healthy foods. “When we get into plant forward, we’re talking about substituting plant proteins for animal proteins with beans and legumes,” says Kamen. “Much has to do with properly handling and cooking legumes and beans as well as the ability to properly source these ingredients.” He says sourcing ingredients has been a problem, as was the case with quinoa before its consumption became more widespread.

The challenge comes with an opportunity to educate those in the industry about which grains and legumes are readily available, says Kamen, and how to prepare and use these ingredients. He anticipates a wider variety of product will become available as demand for these foods increases. “It’ll morph into something that is closer to what’s happening to some of the grains currently,” he says.

Restaurant staff education specific to healthy dining is currently lacking, says Michael Casey, managing partner of San Francisco-based Storey Hospitality. The 30-year veteran of the hospitality industry is also a former operator of Michelin Star restaurants. “The expectations of customers are so much greater than the training commitments to all staff members, both front and back of house,” he says. “It takes menu evolution and the education of staff to support [healthy dining].”

To evolve, chefs will need to willingly embrace the change and challenge their own traditional training and expectations, says Casey. “We operate a small hotel in California, and that chef is listening to customers,” he says. “He was willing to take French cooking that doesn’t embrace these trends and reengineer it to be gluten free and vegan. That’s what we need to see and what we will see moving forward; the evolution timeline and how aggressive they’ll be will be very interesting.”

The trend in menu transparency, and particularly how that appeals to Millennials, will benefit plant-based trends, Casey believes. “The spotlight on food allergies and transparency expectations is increasing all the time,” he says. “Customers are concerned with how foods are sourced and produced; eating healthier will soon become the norm rather than the exception.”

For operators like LYFE, determining which healthy food trend to embrace represents a significant challenge. “There’s so much out there and new information on health and wellness all the time,” says Paulsen. “It’s a great time to be in the restaurant industry and this space, but the information overload can be overwhelming. We need to do our due diligence to see what trends to embrace.”

LYFE, for example, dedicates time and resources to research and test each ingredient. The chain is currently exploring super grains and plans to add sprouted buckwheat to its spring menu. “We’re working with a cool company in Chicago that provides hemp seeds and other proteins with health benefits through grains and seeds,” says Paulsen. “We’re also incorporating adaptogens [unique plants or herbs that support the adrenal system] in smoothies and other items on the menu. This is a word that was scary to people one to two years ago.”

Fortunately, the influx of healthy dishes on today’s menus does not necessarily require a greater investment in, nor an overhaul of, restaurant kitchens. “A kitchen is a kitchen, so the processes are the same,” says Heeley. “If you’re frying or charbroiling, it’s the same process, so new or unique equipment is not required.”

When executing healthy menu options, operators may use fry stations less or eliminate these spaces entirely. But the areas that often require the most work are pantry stations. “In the past, the pantry station was an entry-level station for most concepts as it required the least skill to perform the duties of the station,” says Candelas. “With the increased plant-based focus, the station is now more diverse in not only the food offerings (think more diverse foods than just salad mixes) but in how the product is being presented to the guest — unique grains, mix-ins, etc., so the skill set for the station is elevated and more of an integral part of the concept.”

“In a healthy concept we’re setting up now, the kitchen is $50,000 less compared to that of a traditional restaurant since we’re doing more with less, and the labor factor is another large component,” says Candelas. “Real estate is expensive, so a smaller footprint at 3,500 to 4,000 square feet means we’re not filling as much space. It’s value versus labor, and multitasking is key.”

Plant-forward menus often place a greater emphasis on greens and legumes, Kamen says, and that has more operators using pressure-cooking equipment. “Although not new, it’s something we’re seeing more of,” he says. “Steam-jacketed kettles and tilting skillets are being outfitted as pressure vessels for a variety of products, including grains and legumes.”

Multifunctional equipment with advanced technology makes preparing healthier dishes and working with plant-based ingredients easier than in the past. “I’m also very impressed with manufacturers’ self-cooking centers and combi ovens that are so hyper accurate in terms of cooking temperatures and the level of moisture used,” says Kamen. “Devices that can do more air frying will be real game changers in this segment as well.”

Casey also sees combi ovens as a fixture for preparing these food items as the steam option provides a healthier cooking method and a setting flexibility allows operators to use less oil than traditional cooking methods. “Steam kettles are handy in terms of infusing broths into menus, and we’re finding dehydrators are useful in creating healthy snacks, concentrating flavors and retaining the nutritional value of foods,” he says. 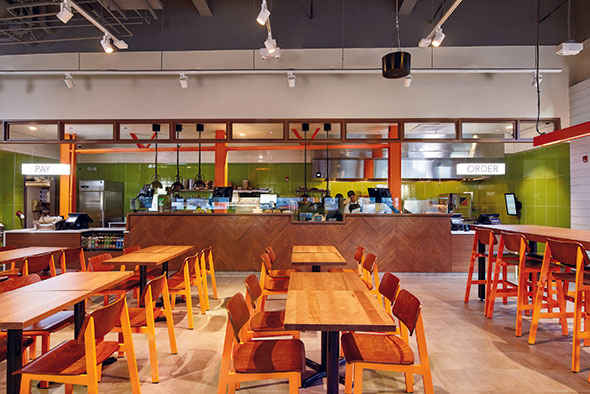 LYFE Kitchen eschews fryers and microwaves in its kitchens, choosing instead equipment more geared to a health-conscious concept. “This is an area where our kitchens have had a leg up since we’ve chosen to mindfully prepare food healthfully and quickly,” says Paulsen. “We use conveyor ovens for prep and our menu components.”

Although food trends tend to come and go as do diet fads, many predict that healthy dining is here to stay. “From a health and planet sustainability perspective, this is the wave of the future,” says Kamen. “For this reason, restaurant operators need to revisit their standards and practices in order to accommodate this way of eating.”