When the economy took a nosedive in 2008, one of the restaurant industry's biggest casualties was the steakhouse segment. Highly dependent on the expense account crowd to drive business, many operators had to make major adjustments not just to compete but to survive. 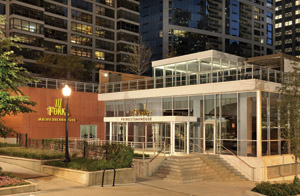 Along with becoming more adept at catering to younger customers who seek smaller portions and sharable appetizers, adjusting to rising beef prices represents a significant challenge for III Forks, like most steakhouses. "We've done everything we can to negotiate and hold down the astronomical price of prime beef, which is what we are known for," Watson says. "III Forks' vice president of purchasing Joette Cox and her team have done a terrific job accomplishing this."

III Forks also updated its décor to a lighter palate with clean lines and a contemporary look from a typical, more masculine steakhouse design. The Chicago location opened two years ago, for example, and has a midcentury modern design aesthetic in its materials and finishes. Depending on the location, seating ranges from 280 up to about 900 customers.

USDA Prime steak represents the core of the menu, and while many steakhouses offer one or two prime varieties, this is the specialty at III Forks. In addition to USDA Prime bone-in rib eye, strip and porterhouse steak, the menu includes fresh seafood, regional specials and a variety of sides, including the III Forks salad, off-the-cob creamed corn and duchess whipped potatoes.

III Forks also focuses on regional fare and ingredients. For example, at each location chefs identify local cheese within their markets to include in charcuterie plates. "We also discovered when serving shrimp cocktail in Florida, customers seek Key West shrimp, which are sweeter than the brown tiger shrimp served at our other locations," Watson says.

In the last five years, menus at all locations have added less costly regional fare, such as a veal porterhouse in Austin and rack of lamb in Chicago. The menu also features expanded appetizers and bar offerings to appeal to a younger demographic. To broaden its demographic even more, the concept has adapted to better cater to vegetarians. Meat-free pasta dishes include pasta primavera and ravioli with mushrooms and root vegetables.

"Also, as a steakhouse, wine is important to us," Watson says. "Each location offers a broad array of primarily California cabernet wines, which pair well with our steaks."

Supporting this diverse menu is a kitchen that comprises between 35 percent and 38 percent of each restaurant's square footage. Here, upright steakhouse broilers take center stage. "We have either a pair of 48-inch broilers or a 48-inch and 36-inch broiler that get up to 1,400 degrees F," Cox says. "This is the most unique and restrictive piece of equipment we order, since this particular model sears in the meat's juices."

Meat, with the exception of the bone-in rib eye, is cut to order and stored in undercounter drawer refrigeration adjacent to the broilers. Other equipment includes a stovetop, kettle, walk-in cooler, small walk-in freezer and warewasher. All of the equipment specified for III Forks is heavy duty, since durability is of the utmost importance for this chain.

With the recent escalating price of beef, steakhouses like III Forks have had to make menu adjustments without compromising the concept. "What doesn't work in the steakhouse business is shifting people away from steak toward chicken or fish," Watson says. "Instead, we look at portions and alternative cuts that are a better value for customers."

Despite these challenges, III Forks continues in expansion mode. At press time, a new 6,000-square-foot site was preparing to open at Los Angeles International Airport. A number of locations are also planned for the Middle East in the next few years.

"We anticipate more openings in top U.S. markets in the next 12 to 24 months," Watson says. "This is where the best opportunities are for our brand."