Multiline foodservice equipment manufacturer Welbilt made a series of changes to its leadership team both at the corporate level and across several of its lines.

At the corporate level, company veteran Jim Courtright will now serve as vice president of sales, Americas for Welbilt. He will be responsible for sales in both North America and South America, as well as overseeing Welbilt’s network of independent manufacturers’ reps in the U.S. and managing the company’s relationship with dealer-based foodservice equipment buying groups. In 1994 Courtright joined Scotsman Ice Systems, where he held various roles, including management of sales for the Enodis brands from 2001 to 2009. In his new position, he returns to the Welbilt family of companies. Courtright most recently served as vice president of global accounts at Scotsman. 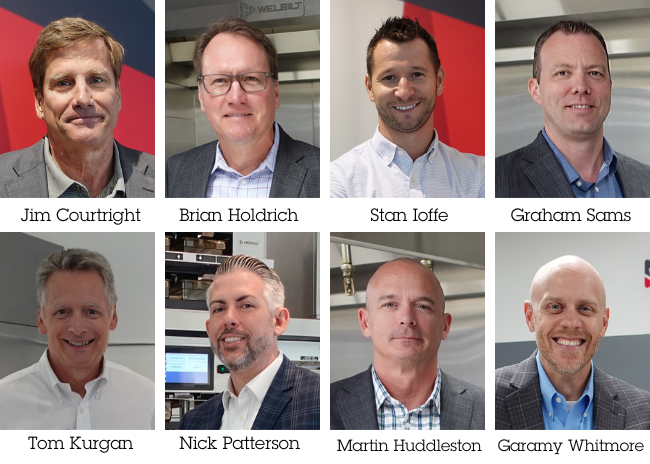 Brandon Slotman now serves as president of Delfield. He joined Delfield in 2020 as vice president and managing director. Slotman’s career dates back to 2008 when he began work as an engineer for Denso Corp. His background also includes working for Tenneco.

Mark Smith now serves as president of Multiplex. He most recently served as vice president and managing director for Multiplex. Smith has more than 28 years of experience in the beverage industry.

Clint Reed has been named President of Kolpak. In 2018, Reed was promoted to vice president and managing director of Kolpak. Reed joined Welbilt in 2009 working in various finance, production, and plant management positions. Prior to joining Welbilt, he served as controller for Cascades Inc. from 2001 to 2009.

Ioffe spent nine years in the consumer package goods industry, holding various roles at General Mills and Canada Bread. He joined Welbilt in 2020 as head of finance for the Canadian division, supporting the Garland, Lincoln and Cleveland manufacturing facilities as well as the American ovens and Canadian distribution businesses. 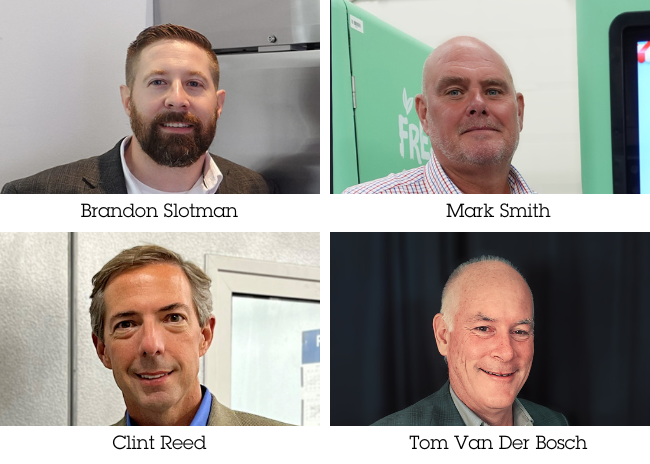 Joining Sams working on Welbilt’s Lincoln line of equipment in a general manager’s role is Tom Kurgan. In this role, Kurgan assumes responsibility for all U.S. sales, service and support for Lincoln equipment. He most recently served as an area vice president for Welbilt, covering the Midwest and Northeast regions. Kurgan began his foodservice industry career in 1988 with Lincoln Foodservice Products. He has held various sales and marketing positions for Enodis, Manitowoc Foodservice and Welbilt.

Nick Patterson has been named president of Merco and KitchenConnect. Patterson most recently served as vice president and managing director of Merco. He joined Welbilt in 2010 in a research and development role.

Tom Van Der Bosch now serves as vice president of KitchenCare. He joined Scotsman Ice Systems in 2000 and held a variety of positions including vice president of parts and service and director of customer support.

Martin Huddleston now serves as general manager for Welbilt’s Convotherm line of equipment. Huddleston most recently served as vice president of sales/general manager for Eloma North America, which is an Ali Group company. Huddleston’s background, though, includes working with a variety of Welbilt lines. Huddleston joined Lincoln Foodservice in 2005 supporting business development for Lincoln, Merco, and Merrychef. He eventually became a sales manager for accelerated cooking technology working with Welbilt’s Convotherm, Lincoln, and Merrychef lines. In 2016, Huddleston was promoted to director of the culinary sales team to lead efforts to grow national accounts and general market sales of the Merrychef and Convotherm lines.

Finally, Garamy Whitmore will now serve as general manager for Merrychef U.S. In this role, he will be responsible for leading all U.S. sales, service and support activities for Merrychef. Since joining Welbilt in 2005, Whitmore has held various sales and culinary leadership roles supporting the Convotherm, Lincoln, and Merco lines. He most recently served as area vice president, central, providing key account and channel leadership for the entire Welbilt portfolio of brands.

These changes come roughly one month after Ali Group completed its acquisition of Welbilt. When that deal was complete, Ali Group appointed company veteran Kevin Clark to serve as CEO of Welbilt.