As part of its plan to ignite corporate store development, Captain D’s opened a company-owned restaurant in Birmingham, Ala. 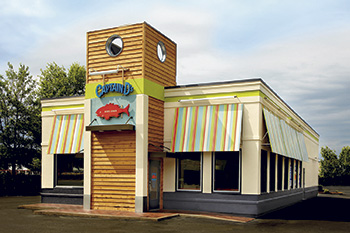 Captain D'sThis location was originally an Arby’s, but when that plan was scrapped, the Captain D’s development team was able to convert the structure rather than demolish the building and start from scratch. The location features the company’s new prototype design — a coastal theme resembling a seaside destination — and includes new menu boards, dinnerware and a newly reformulated equipment line. In addition to the new appearance, Captain D’s restaurants will feature the chain’s new Fire Grilled menu, which includes shrimp skewers, wild Alaskan salmon, seasoned tilapia, and surf and turf (shrimp and beef skewers).