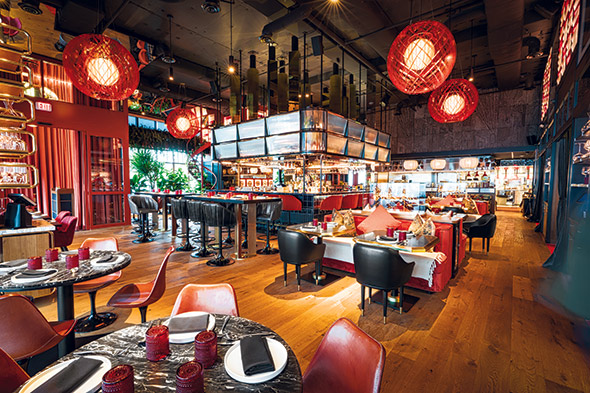 When Ignacio Torras and Luis Roger opened a second restaurant in Houston last summer, they pulled out all the stops to take customers on a gastronomical journey in a new restaurant territory. MAD restaurant in Houston charts the course for customers to experience authentic Spanish cuisine, intriguing presentation and eclectic decor in a stimulating — and exotic — environment. All fitting for the restaurant’s slogan, “From MAD to the Moon.”

Before understanding MAD, Roger says, one must be familiar with the duo’s first restaurant, BCN Taste & Tradition, located just 15 minutes from MAD in Houston’s River Oaks District. “BCN started as a nod to Barcelona with a very conscious effort to avoid the cliche of tapas and paellas within an elegant and homey environment,” says Roger, who serves as the executive chef for both restaurants. “The idea for MAD was to do exactly what we wanted to avoid with BCN by doing elevated tapas and rice dishes known as paellas. The concept also plays off the distinction of Madrid being a lively party and metropolitan city to Barcelona’s relaxed Mediterranean vibe. The central theme was to capture the dynamic energy of the capital city.” The restaurants’ names match the airport codes for Barcelona and Madrid. “The project was a tenant build-out in a portion of a building within the River Oaks District development,” says Michael Dreef, AIA, vice president, Eubanks Group Architects in Houston. “The visual excitement of the numerous materials, textures and colors came together very well to create a perfect setting for the chef to showcase his incredible culinary talent.”

The architects’ biggest challenge was a time constraint imposed by the landlord on MAD’s owners. “Our clients were required to open their new concept within a difficult timeframe considering the complex nature of this very detailed project,” Dreef says. “They thought they could simply finish out some work that a previous restaurateur started, which turned out to be wrong.”

In addition, Dreef says, the interior design team from Spain’s Lázaro Rosa-Violán Studio, led by Lázaro Rosa-Violán, was “understandably not familiar with our local codes, especially with ADA and City of Houston Health Department regulations. This often led to our delivering the news that what they wanted to do could not be done.”

Another challenge was that all project team members had to convert metric and imperial units to the correct U.S. dimension designations. “Making the conversions necessitated spending a lot of time at the restaurant to make sure the measurements were accurate for the equipment specifications,” adds Jeffrey Lewis, design consultant at Ace Mart Restaurant Supply, based in San Antonio.

The central bar serves as the focal point for the front of the house. “The bar was in place from a previously half-built concept and a structural pillar in the center of the space,” Dreef says. “The design team kept the bar in its place because this adds to a lively environment.” The bar sits between private rooms on one side and banquet seating and an open kitchen on the other side. The lighting and textures send MAD customers to the moon. Photo by Luis Alx BasurtoConceived by Rosa-Violán, MAD’s space moves with a reverberating vibration. Twelve spinning mirrors sit above the bar while a 9-foot by 37-foot Brutalist mural graces the dining area. Also featured are eight Picasso ceramics, two glass lamps by Dale Chihuly and a sculpture by Ron Fritts. A print of a bear dressed in a spacesuit and helmet greets guests. A 30-foot by 16-foot outdoor mural, illuminated with a variety of LED lights, sits behind four 130-year-old illuminated olive trees on MAD’s outdoor granite patio. Chandeliers on the patio evoke phases of the moon. The bar area vibrates with colors and displays two miniature golden replicas of the Cassini spacecraft probes made of electro-coated 3D-printed pieces (at right). Photo by Julie Soefer Customers see the expo line as they dine. Photo by Luis Alx Basurto

Food deliveries come in a back door. Staff store ingredients in one walk-in cooler that holds proteins and beverages, another containing produce, dairy and other ingredients, and a walk-in freezer. Staff transport goods needing dry storage to a level above.

The culinary staff use traditional Spanish techniques to prepare both classical as well as contemporary menu items that will change every two and a half months. They ready ingredients for assembly and hot prep in a cold prep area. The staff makes nearly all menu items from scratch and purchases as many locally sourced ingredients as possible. “To be certain we adhere to the strictest sanitation standards, the back kitchen is very cold,” Roger says. The coldest part is the pantry, pastry and cold plates stations. In the cold environment, staff use immersion blenders, a slicer, a five-quart mixer and a convection oven to prepare menu items such as shucked oysters, steak tartare and Norwegian lobster, as well as foie gras cornetto, a savory tapas made with foie gras terrine, duck consommé glaze and colorful sprinkles staged to look like ice cream on a cone. Another favorite dish, MAD tomato, looks like a tomato but actually consists of a tomato-flavored gelatin shell filled with Parmesan mousse and green basil pesto. Staff also produce salads and cold soups such as chilled beet soup with Manzanilla olives, green apples, pine nuts and kefir cheese.

Roger and the culinary staff also prepare liquid olives, a signature creation of molecular gastronomy. Roger mastered the technique at the renowned El Bulli, outside of Barcelona, Spain, where he worked for several months (the restaurant has since closed). Olive juice is made to look like a solid green olive through a spherification process involving ingredients such as calcium chloride, alginate and xanthan gum.

At the dessert station, staff use immersion blenders and mixers to prepare churros con chocolate (light, fried dough sticks presented in a paper cone with dark chocolate dipping sauce) and a vanilla shortbread dessert with coconut cremeux, Granny Smith apples, cucumber and puffed tapioca. Staff use a countertop chocolate temperer to gently heat and melt chocolate. In addition, culinary staff use vacuum sealers to contain chocolate so it remains fresh for each preparation. The vacuum sealers also allow the culinary staff to infuse spices into proteins for other menu items. A dehumidifying cabinet, blast chiller and convection oven assist culinary staff in the back of the house. Photo by Luis Alx Basurto

On the hot cooklines in back, staff use a 36-inch range with 6 open burners, a countertop griddle, a salamander broiler and a pair of fryers to prepare many of the tapas. These might include the arroz con calamares (calamari rice), almejas (clams) and wood-roasted bomba rice with calamari, clams and shishito peppers. The staff also prepare fish the restaurant receives daily from Spain.

A combi oven bakes pan de cristal (similar to ciabatta) that comes from Spain flash frozen. The oven also roasts proteins such as suckling pig served Segovian style with smoky rice with butternut squash, fish and meats. Staff use a tilt skillet for cooking potatoes that turn into a spicy tapas dish and two stockpot ranges for heating sauces. In addition, the culinary staff braises meats and makes reductions in a tilt skillet. An undercounter blast chiller supports culinary staff as they quickly lower the temperature of ingredients. Combi ovens, fryers, a six-burner range and a griddle support production in the back kitchen. Photo by Luis Alx Basurto

The front hot cookline, visible to guests, contains a 9-foot paella grill using charcoal solid fuel, which was designed with drawers for holding wood and an ash collector, a solid fuel grill and a wood-burning oven. “We use this equipment in Spain and now here because we can infuse the ingredients with more smokiness and cook the dishes in less time while keeping in the moisture,” Roger says. “For instance, the ovens can reach 500 degrees F, so we can cook ingredients quickly. It is also a lot of fun to use.” “The entire operation contains seven hoods to give the chefs all the flexibility and power they need to create authentic Spanish cuisine,” Lewis says. “The hoods on the paella grill where the equipment uses a combination of gas and solid fuel must have a water-based, fire-suppression, self-cleaning core-system.”

A central expo table anchors the kitchen. “This allows the kitchen staff to function in a group when completing detailed plates,” Lewis adds. The dishwashing area contains a ventless dishwasher and a waste collector.

MAD’s success exceeds the owners’ expectations. Houstonians may not have known they needed this style of authentic Spanish cuisine, but now that they’ve tasted its flavors and immersed themselves in the wild decor, they understand why going “From MAD to the Moon” is such an exciting journey worth taking over and again.

Michael Dreef, AIA, vice president, Eubanks Group Architects. Dreef joined in 1997. He and Gervais collaborated on the Carrabba’s Original Project in Houston and are currently working on The Coronado Club and The Vault, both at The Corinthian Houston.

Holly Gervais, senior associate and project manager, Eubanks Group Architects. Gervais joined the firm in 2004. She and Dreef collaborated on the Carrabba’s Original Project in Houston and are currently working on The Coronado Club and The Vault, both at The Corinthian Houston.

Jeffrey Lewis, design consultant, Ace Mart Restaurant Supply. Lewis entered into foodservice consulting, appraising services and sales in 1980. Before joining Ace Mart two years ago, he was a third-generation owner of Empire Restaurant Supply with his father and brother for 30 years.

Luis Roger, co-owner, BCN Taste & Tradition and MAD. Roger came to Houston five years ago. He and partner Ignacio Torras opened BCN in 2014 and MAD in 2019.

Ignacio Torras, co-owner, BCN Taste & Tradition and MAD. Born in Barcelona, Torras later spent eight years in Brazil and Mexico before arriving in Houston in 1989. He worked for two petrochemical trading multinationals, moved to Panama in 1996 to open Tricon Energy and then moved back to Houston in 1999.