Six culinary labs, a restaurant/bar, a bakery café and a full catering operation or the conference center give culinary students an opportunity to learn their trade on state-of-the-art equipment situated on two lower floors and in a penthouse suite. 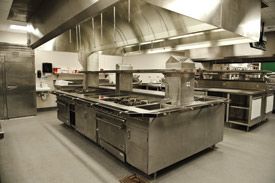 The cooking suite sits under an energy-efficient hood. The labs also feature versatile refrigerated drawers.For 27 years after its founding, Ivy Tech Community College's culinary program had earned respect and a well-deserved reputation. Then, in 2003, Jeffrey Bricker, CEC, CCE, AAC, an alum of the program, part-time program instructor and former catering company owner, took on the program chair position. Working with an advisory council to develop a strategic plan, Bricker realized an enormous need for more culinary and hospitality staff in Indianapolis to support the new Lucas Oil Stadium, home to the Indianapolis Colts football team, and the city's convention center, which doubled in size in 2010.

"A significant culinary program expansion was needed," he says. "We were situated in an old campus building, with 220 students and operating out of 2 dated kitchens. We were landlocked and had no room to grow." So the school began exploring its options, continuing for eight years to research five different program venues and business plans. Meanwhile, an additional 380 students joined the program, bringing enrollment to 600. Bricker and the advisory council were understandably frustrated.

In December 2010, the Eli Lilly and Company Foundation, the tax-exempt private foundation headquartered in Indianapolis and established in 1968 by the global pharmaceutical giant, offered a $23 million grant to buy and renovate a 13-story building adjacent to campus. "The foundation was interested in the revitalization of this area, which is close to the world's largest children's museum," Bricker says. "They didn't want the area falling into disrepair and saw this as an opportunity to develop an educational corridor around the museum. They asked the college to identify its biggest need, which was culinary and a corporate college for customized noncredit training."

Working with administrators, faculty, Schmidt Associates and Reitano Design (formerly Foodservice Solution Group), Bricker led the project team to gut an existing Stouffer's Hotel that had closed in the 1980s and build a contemporary facility that includes the school's central region culinary program with seven culinary labs, a restaurant/bar, a bakery café and full catering operation for the conference center, and a corporate college.

The culinary college currently enrolls 850 students, and enrollment is expected to grow to 1,500 students. "As a community college we have a broad student profile of all ages and educational backgrounds," Bricker says. "The average age is 26. Nearly 70 percent of the students qualify for Pell grants, and a high percentage are first-generation college students. Because this is part of a statewide community college system, the legislature provides funding and caps tuition. A student can get an associate's degree for less than $10,000, about one-fifth the cost of proprietary schools." Bricker adds that the new facility allows scheduling that gives students flexibility to work, attend school, manage their nonschool lives and move through the program in 18 months.

"They now have a world-class facility supporting a world-class program," Reitano says. "An interactive process brought Chef Bricker and his staff into the design process. Their experience and input were invaluable in getting the spaces right and getting the project done on time."

Built in the 1960s, the Stouffer's Hotel was a hot spot through the 1970s, registering guests such as Elvis Presley. After the hotel shut its doors in the early 1980s, a faith-based organization moved in to occupy the facility.

"We had to work with a structured space and yet gut the entire building except for historical elements on the 13th floor in order to bring the structure up to code," Bricker says. "We had to do asbestos abatement and replace all the windows, electrical wiring, HVAC and plumbing."

"This building had very low floor-to-floor heights," says Kevin Shelley, project lead at Schmidt Architects, Indianapolis. "We literally raised the roof of a portion of the building four feet, which gave us space to run the systems to support the culinary labs, including exhaust hoods. It was the most cost-effective option." The second floor, to which Shelley refers, is an appendage to the 13-story tower on its north side.

"The key for us was the building's entry lobby," Shelley says. "The hotel tower had 8 feet, 8 inches, floor-to-floor, leaving less than 8 feet of clearance for program space and systems. We created an atrium that never existed to help make this an open space." Grand stairs lead to the ballroom and classrooms and connect to the conference room.

Also in the building, the construction team had to clear space in an area that was originally the hotel's swimming pool. Thick concrete was removed to build culinary laboratories.

Early on in the design process, the owner and the project team set a goal for the design to meet the requirements for LEED silver certification, which influenced the selection of the heating and cooling systems; high-efficiency, low-CFM exhaust hoods; foodservice equipment, including dishwashing and disposal systems; and windows. In the restaurant, designers selected carpeting with high amounts of recycled content, porcelain tile floors and lay-in acoustic ceilings.

Lighting includes fluorescents throughout the labs. In the restaurant, lighting includes both fluorescents and incandescents. Also contributing to energy efficiency is an advanced refrigeration system designed with 100 percent redundancy, intelligence for defrost-as-needed only, an alarm and HACCP reporting function, and a smaller footprint than traditional rack systems.

"There is also the additional benefit of removing compressors from each of the lab spaces," says Scott Reitano, principal, Reitano Design Group, the project's foodservice design consultant. "The instructional team struggled with teaching over the noise of multiple compressors in each lab. With this refrigeration system we eliminated that issue and reduced the heat load within the building."

Another significant challenge was the tight design schedule and subsequent construction timeline. "Design of the project began in March 2011 and was completed in September of the same year," says Reitano. "The project was bid in late 2011, and construction began in February 2012. Classes started on August 20, 2012.

"We focused a significant amount of our attention on this project over the 18-month design and construction period," Reitano explains. "We actually treated it like multiple projects in order to meet the various deadlines. The team worked closely with the general contractor, Shiel Sexton, and the kitchen equipment contractor, Stafford-Smith, to make adjustments until the very last second prior to opening." 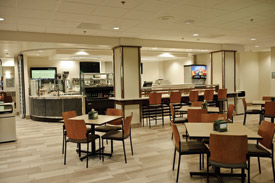 "The equipment and layout was driven by our curriculum and course objectives," Bricker says.

Bricker and Reitano investigated equipment at two industry trade shows and toured other culinary schools. "We wanted students to experience current technology so they'll be prepared to use it when they take jobs in the industry," Bricker says.

"We wanted to give them equipment they'd see in the marketplace," Reitano says. "The layouts don't exactly mimic what you'll find in a commercial kitchen. We adjusted the distance between cooking islands and counters to accommodate classes of up to 16 students.

"There are also different, yet similar, items on the cooking suites so students can experience various cooking methods," Reitano continues. "For example, both induction burners and gas burners are available on each suite. Our overarching goal was to create an open learning environment for the students. The use of windows, the placement of the equipment, and even the use of 55-inch monitors suspended from the ceiling helped us achieve that goal."