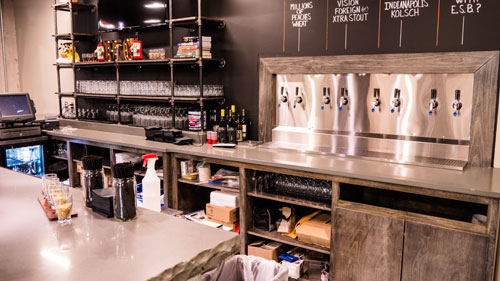 Proper temperature control is essential in the brewing process…and is especially critical for a business that’s based around brewing. Gnometown Brewing Company in Ft. Wayne, Ind. is the only “brew-your-own” brewery in the state. Customers can select their own beer styles and ingredients; the Gnometown crew helps them brew it and the finished product is bottled or kegged for take-home. Additionally, Gnometown brews some custom beers for other restaurants in the area.

At every point in the brewing process, temperature is critical, says James Khan, president of Gnometown Brewing. “The temperature of the beer as it ferments is extremely important,” he says. “You want to make sure that it stays the right temperature when you cold crash (lower the temperature for packaging) and store it.” 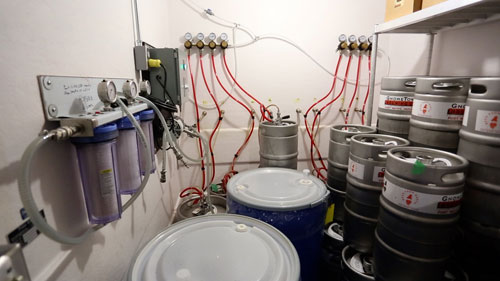 Taps and kegs inside the Polar King cooler are an integral part of the unique beer-serving system at Gnometown Brewing.

Khan learned the importance of dependable refrigeration first-hand a few years ago when he opened his Hoppy Gnome restaurant in Ft. Wayne. The cooler he purchased broke down — on opening day. Khan says that he bought two walk-in coolers and three line coolers from the same company “and every single one of them failed within the first year,” he notes. “Their five-year warranty didn’t cover any of that.”

What saved Khan and the Hoppy Gnome crew during this opening day crisis was a call to Polar King. Fortunately, Polar King was local and delivered a temporary cooler to the restaurant quickly so it could continue operating. “From then on, we’ve only bought Polar King coolers,” he says. 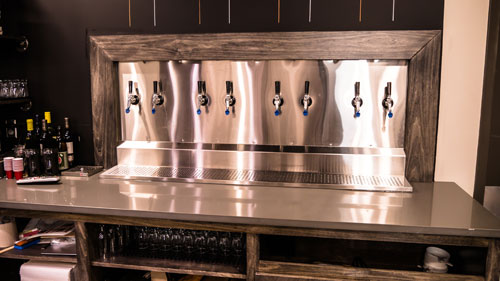 Beer is delivered from the Polar King unit directly to the taps, and is always at the perfect serving temperature.

Gnometown Brewing had some special considerations that had to be worked out before its opening. Unlike many standalone restaurants, the brewery is located on the first floor of a 15-story building. “When you’re delivering to a downtown facility and an interior space, it makes it difficult to deliver,” Khan says. So, the Polar King team mapped out the building specs and ensured the unit would fit precisely.  And since kegs weighing 200 to 300 pounds each were going to be stored in the cooler, the flooring had to be extra durable. “They spent a lot of time testing and ensuring that the flooring they were putting in was going to be perfect,” Khan says.

Perhaps the most unique feature of the Polar King cooler setup at Gnometown is that instead of having a traditional glycol beer delivery system, the cooler is located against the back wall of the bar and the beer taps are extended straight through the cooler into the wall. “We can pour straight from the cooler to the guest’s glass,” Khan says, “so there’s no worries about temperature influxes or our glycol compressor failing. It’s a blessing.”

Because he knows he’ll get a dependable product backed by a team that provides exceptional service, Khan is sold on Polar King. “I don’t actually even price out coolers anymore, because I know I’m going to buy Polar King,” he says. “They back what they do with their quality and their experience. It’s amazing.”