Panini presses are typically used for heating sandwiches but there are other applications.

A Guide to Commercial Panini Presses 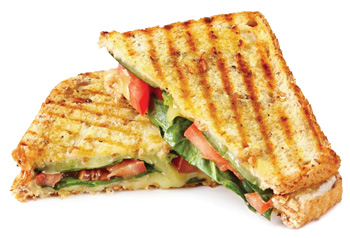 In addition to cheese melting, this equipment can prepare meat, such as burgers, steaks, chicken breasts and pork chops. The flat griddle-type surface can also be used open for preparing small portions of grilled vegetables or other stir-fry items. Operators have even used machines with heavier platens as part of a microgriddle station in conjunction with a ventilation hood. It’s important to note that the thickness or density of the food will impact the cooking time. Whether referred to as a panini press, grill or maker, the construction of these units is basically the same. It’s comprised of two plates that have raised grills that are heated by electricity. While some types create heat, others function solely as a press while the food is cooked by another heating source.

With some manual panini presses, the cast-iron plates are held over and heated by a separate element during use while clamped around the food. The press is flipped halfway through the cooking process to heat the other plate after the first is heated through.

Electric panini grills are more commonly utilized in commercial applications, such as cafes. This equipment includes an electric heating source, making it more efficient and fast. The majority of this equipment is electric, either 1400 or 1800 watts, and runs on a standard 120-volt outlet. Units also are available that run on 220 volts as well. Infrared heat models are offered but not widely used.

Be aware that panini machines are considered cooking equipment, so some municipalities may require a ventilation hood with use, although a grease hood won’t be needed.

A one-stop source for commercial foodservice equipment, supplies, services and the companies that manufacture and market them.