Some people can stare adversity in the face only to experience a career changing moment. Take Carl Boutilier, president of Mirkovich & Associates. 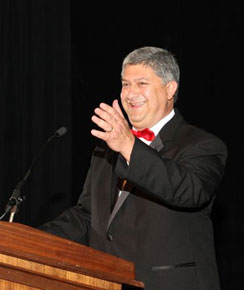 Carl Boutilier
In 1982, with the United States experiencing a challenging economic environment, Boutilier, a recent college graduate, was having a hard time finding a job. At the suggestion of several of his friends who had just done the same, Boutilier interviewed at Bob Evans Farms and the company hired him work as a manager for one of their restaurants. Boutilier spent the next five years working for the company, opening new restaurants and earning the title of general manager. Ready for another challenge, Boutilier left Bob Evans to work as a head hunter for a year.

“It was the most miserable year of my life,” he recalls. “So I picked up the Sunday paper and committed to applying for ten jobs. Unfortunately, I only found nine that I seemed qualified for. The tenth job I applied for promised the world, but I never expected to get the position. So I applied using a handwritten note.”

Boutilier’s approach caught the eye of Jay Mincks, the principal at the Mincks Company, a Michigan-based manufacturers’ rep firm, and he brought Boutilier in for an interview. “I fell in love with the job from day one,” Boutilier recalls. “I loved selling dealers and distributors items they could make money with. How could you not love that? E&S was something I could touch, feel or point to. That tangible sale was a good fit for me.”

Mincks, who remains Boutilier’s good friend and mentor, sold the company to a food broker, and Boutilier once again found himself looking for a new opportunity. During his time with Mincks Company, Boutilier had come to know Pete Mirkovich, who was a regional vice president of sales for a foodservice equipment company the firm represented in Michigan.

So in 1992, four years after purchasing a Chicago-area rep firm from Bill Kelly (now a principal at Kelly Mincks, a rep firm serving the Pacific Northwest), Mirkovich tapped Boutilier to join his company. Boutilier accepted the invitation with an understanding that he would eventually take the reins from Mirkovich. In May 2005 Boutilier became president, and in 2006 Mirkovich retired, allowing Boutilier and his partners, Tim Scherer and Patrick Staackmann, to execute the final steps of the succession plan. Like Boutilier, for both Scherer and Staackmann working as a manufacturer’s rep is a second career. Scherer is the former president of Wisconsin-based Heinemann’s Restaurants, and Staackmann used to work for a broadline distributor that was a Mirkovich & Associates’ customer.

Mirkovich & Associates now employs 12 people and covers Illinois and Wisconsin. The company moves forward combining Mincks’ humble people-first approach and the technical excellence of Mirkovich. In doing so, every employee, regardless of experience level, attends regular factory training for the lines the firm represents. Boutilier and his partners continue to look for ways to diversify the company’s work force by introducing the next generation to the foodservice industry. “It really has made a big difference,” Boutilier says. “Having the new blood in the organization injects positive energy.”

In addition, Boutilier has a keen understanding of the role he and his firm play as reps in the foodservice industry. “Our first and truest customer is the factory because they are the ones who pay us directly. But obviously we have many customers,” he says. “You get orders for the factory by earning the dealer’s business and by taking care of them throughout the process. And we never forget the service agents, consultants and end users – all customers.

“We pride ourselves on our sales results, but it also goes back to what Pete taught me: The factories have tough jobs, too. Help them out,” Boutilier continues. “Our approach is an amicable one in everything. The manufacturers appreciate that.”

Boutilier’s experience managing restaurants has served as a cornerstone for his career. “It helped me develop a general understanding of and admiration for the foodservice business,” he says. “In particular, it helped me understand some of the challenges restaurant operators face such as the need to work long hours, manage the financial aspects of the business and more.