In its first incarnation as a bakery, Anne Walker and Kris Hoogerhyde's operation was commissioned solely to create packaged baked goods for its sister company, Bi-Rite Market, an independent supermarket. 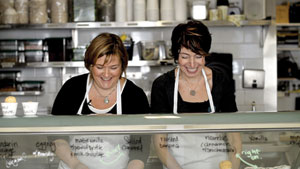 Anne Walker (left) and Kris Hoogerhyde, owners of Bi-Rite, are hands-on in the kitchen.The market had been open four years when the business partners rented a 700-square-foot space across the street to house the bakery in 2010. "When we moved our operations, we wanted to determine the type of business that would serve our community the best," Hoogerhyde says. "There already is a great bakery in the neighborhood, so ice cream was one of the first things that came to mind."

As a result, the duo created Bi-Rite Creamery and Bakeshop, providing locals with organic ice cream made in small batches. Fortunately, Hoogerhyde and Walker, both trained pastry chefs, had experience producing ice cream from their restaurant days.

Two years after opening, business was booming. As luck would have it, space opened up next door that allowed the pair to expand, doubling their square footage. "When we first opened, we were the only shop in the area using organic milk," Hoogerhyde says. "Now there are a half dozen operations like us in the city. Organic ice cream is a definite trend."

Although its menu items aren't certified organic, Hoogerhyde estimates that 95 percent of the ingredients used in the production are organic.

The front of house measures about 150 square feet and seats about 15. Bi-Rite has also opened a new location that features outdoor benches.

The bakeshop's main function is to supply the market with packaged product, including cookies, cakes and pies, as well as ice cream ingredients such as brownies. In addition to cones, scoops and sundaes, customers can purchase pints and quarts of ice cream. Bi-Rite also offers ice cream cakes, popsicles made with fresh fruit and from-scratch ice cream sandwiches.

"We make ice cream every day, but don't make every flavor every day," Hoogerhyde says. "We probably use 100 pounds of sugar for caramel in a week, since we make salted caramel every day."

The 500-square-foot bakery, which operates from 6 a.m. to 10 p.m. each day, includes one oven, a six-burner range, a pair of two-door refrigerators, one three-door refrigerator, a two-door blast freezer and a walk-in freezer.

The bakery will soon double production when a second Bi-Rite Market, which will include an on-site scoop shop, opens in the area. "We're in the process of purchasing a second oven to accommodate the production increase," Hoogerhyde says. "We will produce bakery items and ice cream for the new store out of this location."

When buying equipment, energy efficiency represents a key factor for this sustainability-oriented operation. Other important considerations include the equipment's footprint and movability. "Because we have grown, it has been necessary to redesign the kitchen space by moving equipment around," Hoogerhyde says. "We've had to ensure there is table space for bakers and prep staff as well as room for ingredient storage and refrigeration."

As a result, all of Bi-Rite's heavy equipment rests on casters. Also, Bi-Rite leases the majority of the units, due to the changing production requirements. "We can easily move a table if we find it works better on a different wall," Hoogerhyde says. "If we discover a freezer is a better fit than a two-door refrigerator, we can easily swap them out with the leasing company. We've changed out different pieces of equipment due to the evolving needs of our business."

Because of their conflicting hot and cold requirements, housing an ice cream shop and bakery under one roof comes with its own set of challenges. "We're in a small space that contains many freezers and refrigerators that put out a lot of heat, along with the hot bakery area," Hoogerhyde says. "Every time we open a door on these units, hot air is sucked in, which means temperatures constantly have to be monitored. Our refrigeration repair man is most important to our business."

With a staff of about 30 that includes two full-time ice cream makers, 12 scoopers and five full-time bakers, the operation can handle the high volume efficiently. "We are lucky to have people in the kitchen that have been with us since the beginning," Hoogerhyde says. "They have it down."