Factors such as unskilled labor and shrinking budgets are not handcuffing these foodservice operators as they leverage easy-to-use equipment to serve large volumes of food on a daily basis. 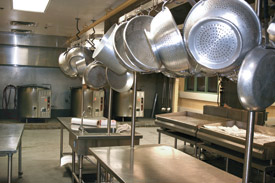 Hurricane Katrina left the correctional kitchen used by the New Orleans Parish Sheriff’s Office under water. As a result, a temporary 5,000 square foot kitchen was built. This space serves 3,000 to 3,400 meals each day.

How easy would it be to disassemble a commercial grill to create weapons? Could someone hide contraband in a warewasher? These are just a couple of the questions those who work in the corrections foodservice segment need to consider when specifying equipment for jails and penitentiaries.

Corrections is a foodservice segment like no other — but it is also chock-full of opportunities when it comes to equipment.

Technomic, a Chicago-based foodservice market research firm, predicts the corrections market will have a retail sales equivalent of more than $4 billion this year.

The U.S. penal institution population totaled more than 2.3 million in 2009, according to the Bureau of Justice Statistics. "The average corrections facility has between 600 and 800 inmates and serves about 2,000 meals per day," says Demetrios Selevredes II, president of Federal Supply USA.

In this segment, security measures impact the types of food served and the equipment that culinary staff use to prepare it. "For example, fresh fruit often is limited because inmates tend to either stuff it down the toilet to stop it up or make hooch (homemade alcohol) with it," says Barbara Wakeen, MA, RD, LD, CCFP, CCHP at Correctional Nutrition Consultants, Ltd. "One facility we worked with eliminated spinach from the menu because inmates would dry and smoke it."

Today's prisons deal with a host of dietary restrictions, including food allergies and sensitivities, which have impacted menu offerings. Each state has calorie count standards for its penitentiaries. "This segment also is revising menus to reduce calorie counts and address the latest nutrition standards," Wakeen says.

In addition to reworking menus, the corrections segment seeks more simplified equipment that is easy to use. "Most of the people running prison kitchens tend not to want sophisticated equipment because it's more difficult to train inmates to operate the units," Selevredes says. "Plus, inmates may be incarcerated one week and gone the next."

Although some corrections operations have implemented sophisticated cook-chill systems, most are under budgetary constraints that limit the back of house to kettles, braising pans and flat grills. "Most of the innovation in this segment is being done with exhaust systems and refrigeration," Selevredes says.

Inmates are resourceful and creative when it comes to finding vulnerabilities in equipment. Consequently, the biggest issue with units utilized in correctional settings is durability. "As far as fabrication, the heavier the better, and all-welded equipment is best," Selevredes says. "This equipment gets a lot of abuse."

Some equipment companies have special corrections lines that may be made of heavier-gauge metal and may feature special covers or locks to protect knobs. "There have been plastics developed that can't be melted and carved into weapons, and portion utensils that inmates are not able to dismantle and form into weapons," Wakeen says.

Although the corrections segment constantly contends with budget constraints, certain factors — such as unskilled labor, high volume and abuse of the equipment — result in more frequent replacement as compared with other foodservice operations.