Make the most from a little bit of space — this emerging foodservice segment continues to avoid operational potholes while making inroads with consumers. 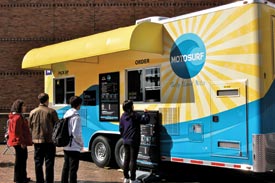 Motosurf, a 22-ft.-long trailer on the campus of the University of Washington in Seattle serves Hawaiian, Korean and Pacific Island entrees and small plates, such as spam musubi, Kahlua pig sliders and Korean barbecue chicken.

After spending three months in nine cities eating at close to 100 food trucks, it is fair to say that Kevin Higar, director of research and consulting at Technomic, a Chicago-based foodservice market research firm, has taken this emerging operator segment for a very thorough test drive.

"There are areas where mobile food trucks are only just emerging," Higar says. "However, cities are discovering that these operations are a great source of additional sales tax revenue."

Rules and regulations for these businesses vary from city to city. Most areas require mobile food operators to obtain a business license, sales tax ID and regular inspections by the local health department. Food trucks and trailers may also require a permit.

A newer phenomenon in Austin is food trailer parks, where there may be up to 12 mobile foodservice businesses operating simultaneously in one area. While seating and bathroom facilities may be scarce or nonexistent by most mobile food operations, Austin's food trailer parks are likely to have both.

"Some of these spaces rent out common areas with indoor seating, a room with a pool table and television and bathrooms," Higar says. "Many of the amenities are the same or even better than brick and mortar restaurants."

Though this is a lucrative segment, there are some cities that are not yet food truck friendly. For example, operators in Chicago are prevented from cooking on site in a truck or trailer. New York City is more receptive to these types of operations than Chicago, but limits the number of mobile food operator permits.

"Dallas regulations have changed, and there are now sites in the city's entertainment district that are dedicated to food trailers," says Matthew Mabel, founder and president of Surrender, a Dallas-based business development consultancy.

In some cases, it's difficult to ascertain where a good idea originated from. For example, an Austin food truck operation called Holy Cacao is selling a confection on a stick that is similar to an item Starbucks just added to its menu. "This is an example of the chicken and the egg, in terms of who did it first. Still, it's a great example of the increasing influence of food trailer cuisine," Higar says.

There are challenges for these operators. Most notably, mobile food truck menus are typically limited to food items that are easy to eat and transport. Along with small plates and regional comfort foods, these operations also tend to focus on ethnic fare, including Latin American, Asian, Italian and Greek foods. "This is because the low start-up costs for these businesses appeal to immigrants who may not have the funds to purchase a traditional restaurant," Higar says.

In many cases, food trucks are showcasing regional foods like Texas barbecue or small indulgences like cupcakes. "A lot of operations key off one popular item and build a small menu around it," Mabel says.

The potential for exposure has resulted in experienced chefs, who are looking to branch out on their own, entering the segment. "I met a chef who had formal dining experience in New Orleans, but didn't want to be at the mercy of a restaurant," Higar says. "He was running a successful Cajun burrito food truck in Phoenix." The business took off, and now the chef has multiple food trucks.

As for service, there is a misconception that food trucks provide food faster than a traditional restaurant. "This isn't always the case," Higar says. "Waiting in line for as long as 45 minutes is typical, and food can take another five to 10 minutes after ordering."

When it comes to getting the word out, social marketing has become a key component used by a growing number of mobile food truck operations. Location or menu changes can be communicated via text, e-mail, Facebook or Twitter, for example. "One mobile food truck operator on the West Coast uses Twitter to see what vegetables customers want him to purchase at the local farmer's market and to find out what people would like to see on the menu that week," Higar says. "Customers can essentially take ownership of the food offerings."