The University of Oklahoma's dining program is popular with its students, and it's no wonder. There are more than 30 restaurants in 14 locations on or near campus. 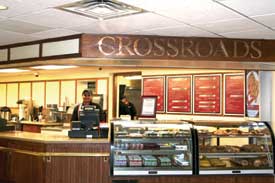 Crossroads Restaurant is considered the cornerstone of OU’s campus dining. The high-traffic restaurant draws members of the university’s community as well as visitors.
Variety and value are the hallmark of its program, which includes a mix of chain restaurants such as Chick-fil-A, Quizno's, Taco Mayo and Burger King. OU Food Services has also developed a series of operations, including The Laughing Tomato, which offers pitas, salads, stuffed tomatoes, wraps, soups and a weekly Farmers'Market; The Flying Cow Café, known for its brick-oven pizza, sandwiches and daily hot entrees; and Couch Restaurants, an all-you-can-eat main dining hall on campus.

Located in the Memorial Union, Crossroads Restaurant is considered the cornerstone of OU's campus dining. The popular, high-traffic restaurant draws members of the university's community as well as visitors. The name suits the operation well.

Although Crossroads was a popular dining option for standard fare, such as hamburgers and curly fries, OU's Food Services department noticed a lag in volume that it attributed to the increased competition from the campus' more trendy restaurants.

So the OU Food Services team set out to breathe new life into a common atmosphere and decided the best way to accomplish this was to enlist the help of Crossroads' customers. During an eight-week period in the summer of 2009, taste tests were held with staff and students to gauge their menu preferences.

Even as the menu grew, the OU Food Services department kept in mind that Crossroad's hallmark classic burger was still key to the restaurant's success. As a result, the revamped menu included the original burger and added more than a dozen specialty burgers and three slider varieties. Chicken and barbecue items also were added.

As a result of the new menu, Crossroad's kitchen had to be redesigned to produce a much larger number of items than the restaurant offered previously. "By introducing two Panini presses for the six Panini varieties on the menu, we grew beyond burgers and fries," says April Buchanan-Sandlin, North Campus retail operations manager.

The 4-ft. flat top grill was replaced with a 6-ft. flat top, and two clam shell grills were added, along with an additional freezer that increases storage capacity. "The flat top is used primarily for hot sandwiches and breakfast items, while the clam-shell grills are used to take raw product, such as chicken and hamburger patties, to a cooked product in batches," says Kevin Barker, OU's director of retail operations.

To accommodate the growth of the menu offerings, a larger infrared fry warmer also was installed. Preparation space for all items, excluding Paninis, was consolidated to one side of the kitchen, providing the opportunity to maximize production efficiency.

Along with new entrée and snack items, desserts were included in the Crossroads menu. Two malt-mixers were installed and additional plans for growth include a drop in freezer for an ice cream concept," says Buchanan-Sandlin.

A CO2-powered condiment station serving ketchup, mustard, mayonnaise, barbecue sauce and ranch dressing was added in January 2010 to improve customer flow through the restaurant. This designated condiment area also has space for napkins, sweetener, salt, pepper and additional condiments. Prior to the improvements, guests picked up individual condiment packets near the cash registers, which could create a bottleneck during busier periods.

"Within a campus restaurant such as Crossroads, which is open 24 hours a day, seven days a week during the academic year, we look for longevity and durability in our foodservice equipment," says Buchanan-Sandlin.

To create a more dynamic atmosphere, the Crossroads upgrade included the use of digital action signage to keep customers engaged as well as provide more visual, free-standing menus.

University leaders, student groups and retirees were asked to adopt an item on the expanded menu and then participate in a food photo shoot. The resulting images were then incorporated into the digital signage, branding the individual with the item, while educating guests about the particular official's responsibilities on campus.

Celebrity signature items include the classic cheeseburger, renamed each year for the university's student body president; the fried egg burger, named after the director of financial aid services, who also owns the cage-free chicken farm that supplies OU Food Services with farm-fresh eggs; and the turkey Panini, named for the vice president for student affairs and dean of students.

Since the renovation was completed, Crossroads' sales increased almost 12 percent and the restaurant has averaged more than 1,500 Panini sales a month.

With the menu enhancements and revamped back of house, Crossroads was reinvented, while still staying true to its burger joint roots.

Looking ahead, Crossroads continues to focus on decreasing its production time by utilizing a prep time monitoring system.

"Many of our customers are between classes and are grabbing a meal to go," Barker says. "We are committed to making sure their meal is prepared fresh and to their preference, with an average wait of only four-and-a-half minutes from time of order."

By expanding on a successful concept and updating a popular menu, OU Food Services was able to redefine a popular campus restaurant without alienating its customers.