College and university foodservice has undergone a major overhaul in recent years. 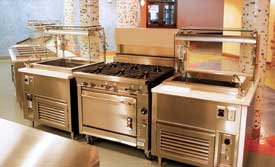 Because display cooking is so prevalent in today’s college foodservice operations, equipment, like the items seen here in Stanford’s Ricker Hall, need to be visually appealing as well as functional.
No longer defined by limited dormitory dining hall cafeteria menus, college and university foodservice has substantially expanded to include food courts with signature and well-known brands, upscale restaurants, grab-and-go outlets and even sports bars. Indeed, at many progressive schools, the restaurant options seem endless.

It was only a matter of time until the segment adapted to meet the needs and increasingly sophisticated tastes of 18- to 24-year-old students.

Calorie-laden comfort food menus of meatloaf and chicken à la king were blamed for the "freshman 15," the extra weight college students put on at school. With healthier fare, calorie counting menus and tools and dietary programs that cater to them, students now only have themselves to blame for any excess weight gain. The classic American comfort food is still around, but is now competing with authentic ethnic dishes, vegetarian fare and gourmet entrees.

The increased variety is reflected in this segment's revenue. Sales of food and nonalcoholic beverages in the education sector totaled more than $30 billion in 2010, according to Technomic, a Chicago-based market research firm. The segment achieved 1.1 percent real growth in 2011, trailing only the travel and leisure sector.

A big initiative in many of today's college and university dining programs is sustainability. NACUFS' 2009 Sustainability Survey revealed that approximately 89 percent of its member schools have implemented trayless service practices, a number that is expected to grow. In addition, approximately 86 percent of its member schools had purchased Energy Star-rated equipment to conserve energy.

A February 2010 issue of Restaurants & Institutions (R&I) magazine defined a number of trends in college and university dining. Restaurant-style seating, including high-tops, booths and traditional tables, is growing in popularity because it provides students with a choice of eating more communal-style or in smaller groups. To accommodate the movement toward more authentic cuisine, some colleges use special equipment items such as tandoor ovens and Brazilian-style churrasqueiras for skewered meats.

There also has been an increase in online ordering as well as grab-and-go sandwich and salad stations. Payment terminals have been installed in dining halls to provide added convenience for busy students.

Display kitchens have become theatre in so many foodservice operations, colleges included. For example, wood-burning brick and stone ovens are being implemented in colleges and universities to prepare pizza, bread and meat dishes.