While the University of Louisville football team is scoring on the field its fans are having similar success at the concession stands thanks to a $71 million renovation project that enhanced the offerings available to patrons.

Before Louisville's Papa John's Cardinal Stadium underwent a $71 million expansion, there was little cooking going on in the concession stands or hospitality suites. As a result, foodservice offerings were limited to items that could be easily warmed up or held, such as hot dogs, nachos and popcorn. 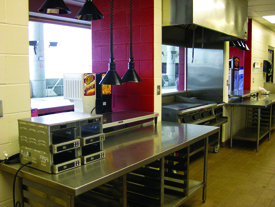 At Louisville’s Papa John’s Stadium., the concession stands’ open design allows customers to view the production line and food preparation.
After the renovation was completed last September, the home of the University of Louisville football team became much more hospitable to fans in terms of its food availability and offerings. The 12-year-old stadium's expansion added 13,000 seats, including 33 new suites on the east side of the stadium and a terrace for standing room, connecting the east and west sides. With the upgrades, the venue can now accommodate more than 55,000 people.

The suites and loge seats open into the 20,000-sq.-ft. PNC Club, extending from end zone to end zone. The area features lounge seating, a full-service bar and concessions. The new terrace can hold 2,500 fans and concessions tents on game day, and is also available for special events.

"The goal was to provide cooking in all of the stadium's new concessions stands," says Eric Wooden, vice president of facility design at Centerplate, a Stamford, Conn.-based hospitality company that provides foodservice for stadiums and other venues.

In addition to a full-service production kitchen, the renovation added two stands on the club level and six on the upper concourse. "All are vented and have cooking capability. There is very little holding capacity for hot foods, since we want to serve right off the grill as much as possible," Wooden says.

Speed of service in a stadium setting is highly dependent on good design and the right equipment. Rather than placing the grill, hood and fryers on the back walls, the venue's new concession stands have cooking lines running perpendicular to the service counter. The new open design has grills and fryers arranged back-to-back, so customers can easily view the production line and food preparation.

"When producing a lot of food in a short amount of time, it can be difficult to meet the demand, but we're doing it," Wooden says. "Our equipment needs fast recovery, since throughput and speed of service demand it."

Preparing food to order has saved on spoilage, helping Centerplate manage its expenditures and allowing the company to keep better track of the items that are selling. "The biggest challenge in stadium foodservice is sheer scale and the number of menu offerings," Wooden says.

For this reason, foodservice equipment also needs to be flexible to accommodate menu changes for different events. "Standard staples, such as hotdogs, account for most of what we sell," Wooden says.

Yet, the menu was expanded after the renovation to include specialty items, including Skinny Skins, a nacho-type snack built around potato chips, and Beef Burgoo, a dish that includes beef and French fries. "We're also offering Asian concepts, where we cook noodles on a flat top grill in front of guests and serve it in a traditional cardboard Chinese food container," Wooden says.

In addition to a layout that enhances speed of service, Papa John's Cardinal Stadium's new concessions areas also have been designed to be as self-contained as possible. Main equipment includes grills, fryers, roller grills, refrigeration, retractable heat lamps and a few newer items. "The combi oven and induction burners are two newer pieces of concessions equipment that we haven't utilized as much in the past," Wooden says.

Centerplate has moved away from utilizing drawer warmers and, instead, has incorporated heated shelves with retractable heat lamps for temperature control. These systems heat the food on the top and bottom for a few seconds before it's delivered to customers. The units also work as built-in displays to help promote various items.

"When I specify equipment, it's important that the manufacturer stand behind their product and deliver it in a timely manner," Wooden says. "Also, durability is always essential. We have a rough business that's hard on equipment."

Unlike a restaurant, where equipment is stagnant, concessions areas regularly move units back and forth to other parts of the building. Quick disconnect components and casters are commonplace. "A slicer may move around 200 times during a football season, so easy transport is necessary," Wooden says. "Everything we buy is on wheels. If a unit doesn't have them already, we'll put them on ourselves."

The new production kitchen includes UDS (Utility Distribution System) walls so equipment can be easily changed out and quickly moved for cleaning.

Equipment technology and innovation have helped transform stadium concessions operations. "Combi ovens provide menu consistency, no matter who's in the kitchen. Line cooks can assemble recipes and program 200 menu items to cook in these units. Fryers can go continuously now, providing consistent results with no down time," Wooden says. "Mobile hot boxes' plastic exterior makes these units lighter and easier to move as well as resistant to scratches and dents."

Even with all of the changes in Papa John's Cardinal Stadium's concessions program, Centerplate continues to look for ways to up the ante.