Some say the Kimpton Hotel group was ahead of its time almost a decade ago when they started introducing environmentally friendly initiatives before the term "green" had washed over the country. 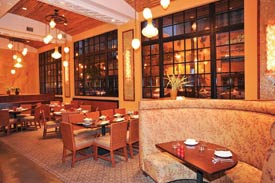 What started as an expanded recycling program here and some new LED lighting there eventually became a five-phase program with rollouts every other year or so that contained packages of initiatives to be applied at all or most of the company's hotels and restaurants around the United States.

Frank Kawecki, director of operations for the Northeast and Mid Atlantic regions and the director of Kimpton Restaurants' Eco Program, took the lead six years ago to oversee the first official phase of the green initiative. That involved eliminating plastics entirely and switching to biodegradable or recyclable disposables.

"Back then people thought we were crazy to do some of the things we did," Kawecki says. And that makes sense, considering the number of biodegradable products on the market has increased almost 200 percent since 2004. It was a challenge for the hotel group to source the right stir sticks that could meet their demands without melting or disintegrating in hot products. They're still working on finding the right stir sticks, picks and trash bags and a non-plastic alternative to plastic wrap in order to meet their goal of becoming completely plastic-free.

Phase one involved partnering with the Monterey Bay Aquarium to source sustainable seafood, installing aerators on all the faucets, and encouraging the use of reusable cups and mugs among activities and catering outlets. Phase two rolled out about five years ago and involved switching to safer cleaning products for the dishwashers, sourcing organic and fair-trade coffee, printing menus on recycled paper, installing motion sensors for lights and switching to energy-efficient bulbs, and expanding the recycling program. It was during this second phase that Kimpton started to purchase more energy- and water-saving equipment and made plans to replace existing equipment from then on.

Phase three, rolled out three years ago, involved developing greater connections with small and organic farmers, sending their cooking oil to biodiesel refineries, installing pulpers in municipalities that allow them, and working with compositing services in various cities to handle their pre- and post-consumer waste. In Washington, D.C., where one Kimpton hotel had a refrigerated trash room, it was easier to introduce a composting system because many composters only pick up twice a week, sometimes less often. Now Kimpton also has composting set up in properties throughout Georgia, Oregon, Maryland, California, Texas, Virginia, Colorado, and Washington.

To the surprise of their hotel competitors Kimpton also decided to forgo the sale and use of bottled water in every aspect of the hotel except the banquets. For many hotels, bottled water is a major revenue driver but since the recession consumers seem to be turning away from such luxuries, not to mention its infamous reputation for being anything but green, says Kawecki. Instead, Kimpton switched to Natura, a filtered water product, and used pitchers of filtered tap water for business meetings. Banquets continue to pose problems because guests at events think they can drink out of the filtered water bottles, and washing them for reuse poses a particular challenge as a result, he says.

Phase four, rolled out two and a half years ago, focused more on the greening of banquets and catering, and included switching to eco-friendly box lunches, buying condiments and butters in bulk to divert packaging waste, and using reusable mugs and glasses instead of disposables, among other initiatives.

Phase five, currently underway, focuses on becoming plastic-free, as well as trying to figure out the Natura water situation at banquets. As far as equipment purchases go, "the process right now is anything that we buy that's going to be replaced is an Energy Star product or an equivalent," Kawecki says. That involves reviewing spec sheets and other documentation to make the right energy-saving equipment purchase that also fits within the hotel's budget.

"We really do our research at the National Restaurant Association show in Chicago every year to see what's out there," Kawecki says. In many cases, solutions for pieces they're having trouble sourcing are close to resolved by going to the show and finding alternatives. Last year the hotel group had trouble finding the right ice machine that could save energy and water but also meet their volume. Next up? Hoods and ventilation, and possibly more LEED-certified projects like the Hotel Palomar in Philadelphia, which earned LEED gold certification.