Among cheaper cuts of meat, brisket represents the top-menued meat, according to Chicago-based Datassential’s MenuTrends report, which measures the percentage of restaurants serving a food, flavor or ingredient. Chicken thighs show double-digit growth over four years, while both chicken thighs and chicken legs grew slightly in the past year. Chuck, sometimes menued as Delmonico steak, is on 4.1% of menus. 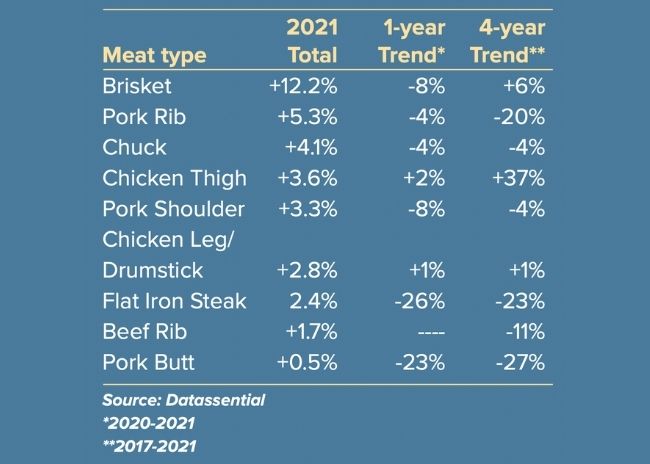 Hotel Solamar’s executive chef, Justin Augustine, has been conscientiously shifting toward more cost-effective meats in an effort to rein in costs for the property’s two restaurants, Jsix and Upper East. Both restaurants offer a limited menu, which includes burgers, quesadillas, tacos and salads. Here, Augustine shares how he incorporates cheaper cuts of meat into the dining experience.

Q: What meat substitutions have you made?

A: For our chicken tacos, instead of using breasts, we use chicken thighs, which is about half the price. Steak is pricey no matter what the cut, but we’re using the more affordable skirt steak in place of flank or hanger steak. We also have been ordering whole chicken wings instead of the smaller party wings and breaking them down ourselves.

Q: Have you had to change prep or production with these meats?

A: The production method is the same. We still dissect meat before it’s cooked, dice it and prepare it on either a flattop or saute in a pan. Steak needs to marinate 12 to 24 hours before we cook it, and some pieces soak longer than others. The meat stays fully marinated and stored in a walk-in or reach-in on the cookline before it’s cooked. We did have to add extra hotel pans for marinating meat, but these don’t take up much space. The cheaper cuts come in more consistently too, so we no longer worry about getting shorted on orders due to supply issues.

Q: What has been the response from customers?

A: We’ve had no complaints. When we switched to thigh meat, our chicken taco sales increased. Chicken thighs hold more moisture than breast meat when
cooked down. 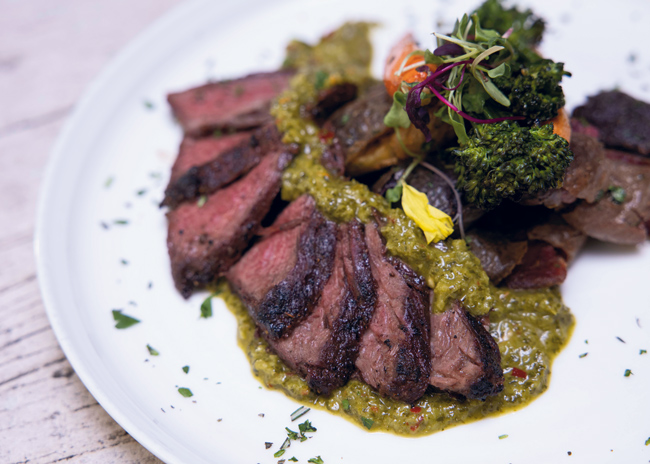 Because cheaper cuts of meat can be tougher, some recommended cooking methods include braising, stewing or roasting on a grill. These methods help meat retain its flavor while resulting in a more tender texture.

Operators can employ other tricks of the trade in preparing cheaper cuts of meat. Cutting across the grain shortens the fibers, resulting in an easier chew as the muscles are already cut through. Slow cooking is a tenderizing process ideal for less costly meats that also brings out the flavor.

Marinating introduces more moisture into the meat for a tender and flavorful outcome.