Brands continue to redesign their exterior pickup approaches with speed and better service in mind. 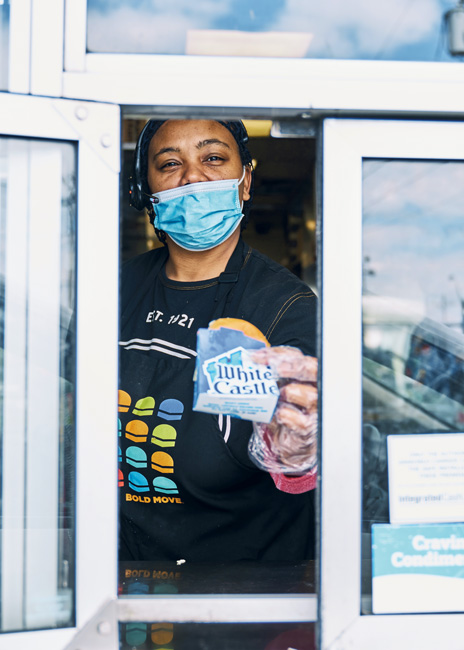 A new artificial intelligence-based app that White Castle is testing uses license plate recognition to send menu recommendations. When the world changed forever in 2020, restaurants were forced to update various aspects of their businesses, but perhaps none more so than their drive-thrus.

Suddenly drive-thrus — along with curbside pickup — became the de facto way to get food. Quick-service restaurants reconfigured, built, researched and redesigned their drive-thrus to improve the experience for the consumer and to boost company sales. And restaurants from other segments that would never have thought of offering drive-thru service began to take a long, hard look at doing so.

According to The NPD Group, Chicago, for the year ending June 2021, drive-thru visits at U.S. restaurants increased 16% compared with a year ago. Speed is also of the essence in drive-thrus.

Columbus, Ohio-based White Castle takes drive-thru speeds very seriously. The quick-serve chain, which has 360 locations, is testing an artificial intelligence-powered drive-thru to get customers through quickly and boost sales.

White Castle is testing the format in Merrillville, Ind. The system — created in partnership with a credit card company — uses uses license plate recognition and a digital voice assistant. It starts with customers opting in to the license plate program through White Castle’s app. The app identifies customers and sends them personal recommendations based on prior purchases and other indicators, like nutritional requirements.

The goal, says vice president Jamie Richardson, is “an enhanced customer experience.” The new system, he says, “can interact with the customer in a way that’s friendlier and provides menu options in a cleaner way so there’s less wait time for the customer to choose what they want.” This interaction comes both from digital boards and the digital voice assistant, known as Julia, after one of the company’s founders. Diners who prefer to speak to a human can do so.

Check averages at White Castle have increased since the chain implemented the new drive-thru, possibly because customers add on more items because they find ordering easier, Richardson points out. “An easy, less stressful experience can lead to more exploration of the menu,” he says. 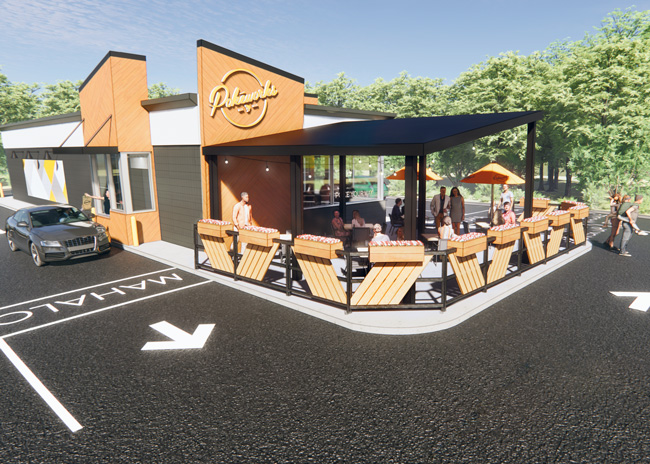 Pokeworks plans to dedicate a drive-thru lane for third-party pickup and app users.

Pokeworks has changed the design of its kitchens slightly to service its new Cruise-Thru Lanes, which will launch this fall in Knoxville, Tenn.

The lanes serve third-party pickup and rewards app users who order ahead. Once users “cruise in,” drivers provide their order number and receive a bag with their food. Sensors alert the kitchen when cars arrive. “We’re trying to make it as touchless and seamless as possible,” says Peter Yang, co-founder and managing partner.

The back-of-the-house features a separate, independent makeline for digital orders so they don’t interfere with walk-in orders. The two lines run parallel but not adjacent. The Cruise-Thru makeline is closest to the pickup window, with a shelf at the end for the bags ready for customers.

The company also enhanced its ticketing systems to ensure order accuracy. “We wanted to make tickets really easy to read, and we have a checklist at the end to verify each order,” Yang explains. The initial prototype location has a large kitchen since it’s a second-generation build-out, and future kitchens may be a little larger to accommodate two makelines, he adds.

The Irvine, Calif.-based company’s app users have doubled this year over 2020. “The pace of new app users is growing, so we’re investing even more into it. Third party also grew,” says Yang, “and we see those trends sticking. We see digital sales still increasing, and we want to invest in that future.”

Pokeworks plans to incorporate the new Cruise-Thru lanes into future restaurants, especially for suburban locations, where it expects to see the most growth.

Schlotzsky’s also made some changes to its new prototype kitchens, shifting some landing areas so the finished food arrives a little closer to the drive-thru. “We shifted the path of how some of these things travel,” says Tory Bartlett, chief brand officer. The landing area now also has a person, similar to an expediter, dedicated to putting orders together and then pushing the food in the direction — drive-thru or eat-in — that it needs to go in. Schlotzsky’s has also either shrunk or eliminated the kitchen cashier position to add the expediting position. 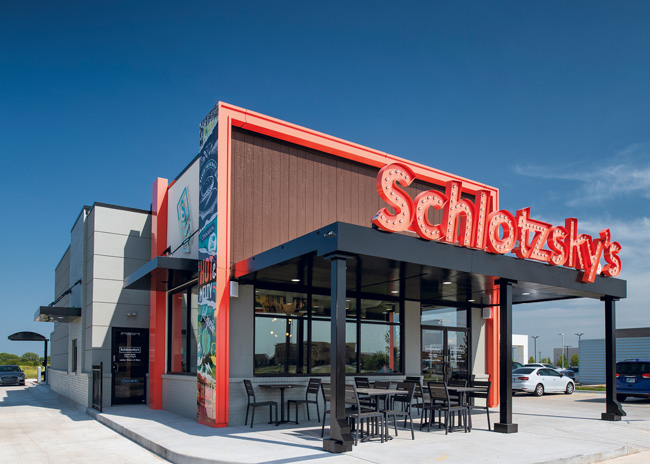 The restaurant chain also incorporated a combi oven for the first time, eliminating two other pieces of equipment (a second oven and a proofer). The combis are easier for staff to operate, Bartlett explains, which translates to taking less of their time. “You push a button, and it does all the work for you,” he says. “It takes a lot of the guesswork out.”

Schlotzsky’s was already working on its drive-thrus when COVID-19 hit and reports that only 30% of its business was dine-in pre-pandemic. The Atlanta-based sandwich chain, owned by Focus Brands, was also already working on eliminating slow-moving menu items and concentrating on best sellers. The concept began offering meal deals to speed things along. “Bam! Customers would be off and running, and that was a huge part of cutting [drive-thru] time down,” says Bartlett. “Focusing on a few things and doing them great allowed us to pick up a lot of speed.”

The company also leaned on timers to calculate drive-thru times and find opportunities to cut seconds from the customer’s journey. “This has been instrumental in getting our drive-thru time to four minutes,” says Bartlett.

Things move faster in the kitchen, too, since staff make fewer items and can rely on new kitchen display systems instead of walking to pick up tickets. In addition, says Bartlett, all staff wear headsets and can hear drive-thru interactions, so they can start building sandwiches before an order is put through. “That also helps with order accuracy as it’s sometimes easier to hear things than read them on a ticket,” Bartlett says.

Now, Schlotzsky’s is launching two new prototypes. One is a 1,000-square-foot concept that is exclusively drive-thru with a 926-square-foot kitchen and pickup windows on both sides. One lane is a traditional drive-thru with capacity for six cars between the pickup window and the ordering station; the second lane has various uses: a second drive-thru, curbside pickup, or third-party delivery staging.

The second prototype is larger — 1,800 square feet with 823 feet of kitchen — and has both a traditional drive-thru and an 800-square-foot dining room with 35 seats. Prior to these prototypes, kitchens were around 1,200 square feet.

The first location featuring the larger drive-thru prototype opened in June in Mountain Home, Ark. The first 1,000-square-foot store will be a corporate store opening in October. Schlotzsky’s growth will focus, Bartlett says, on the Midwest, Southeast and Southwest, and the concept aims to have 400 stores by the close of 2023, with almost all of them featuring drive-thrus. Most will be the larger prototype, Bartlett believes, but there will be “opportunities in small, end-fill markets and by the freeway” for the 1,000-square-foot prototype.

To keep lines moving quickly in the drive-thru, Taco Bell has incorporated Speed Lines — additional production lines in the back of the house — and new kitchen display systems. Plus, the chain added another team member during peak times. 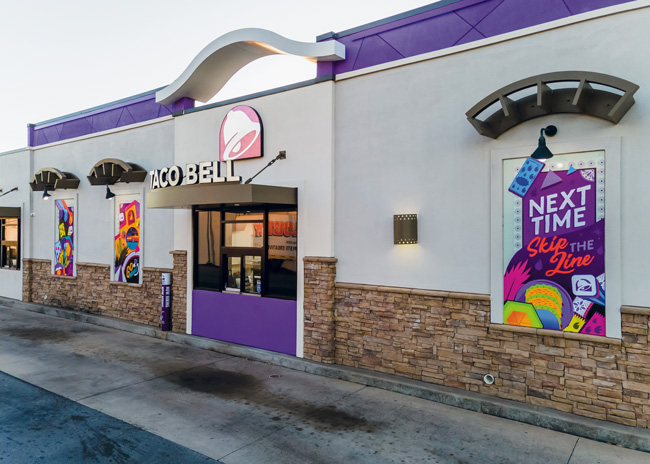 Taco Bell has a priority pickup lane for customers who order through its app.

Due to COVID-19, Taco Bell launched its Go Mobile concept much earlier than anticipated. This features a dual drive-thru with a priority pickup lane and rapid service for customers who order through the Taco Bell app.

To streamline the experience even further, Go Mobile locations have tablet ordering in drive-thrus and curbside pickup, both operated by a concierge service of team members called bellhops. The Irvine, Calif.-based chain also opened locations featuring dual drive-thrus and two pickup windows to ease bottlenecks. Some locations also feature a rapid pickup lane for customers who ordered via the app.

Chick-fil-A also uses tablets to accelerate service and offer guests a more personalized experience in its drive-thru. Employees walk the line and relay customers’ orders to the kitchen, allowing cars to proceed more quickly through what it calls face-to-face ordering. 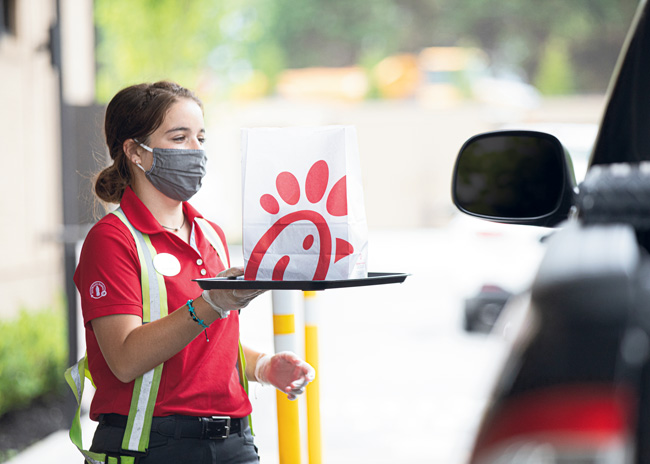 Chick-fil-A employees use tablets in drive-thru lanes to increase speed of service.

“It’s a great way for us to get really high volumes of orders to the kitchen early and cars through the drive-thru extremely efficiently,” says Artie Sposaro, who leads the Chick-fil-A drive-thru innovation team. “It’s also a way for us to give customers personalized service in a place they may not expect it.”

The Atlanta-based brand also added extra drive-thru lanes and has deployed “outside meal delivery,” through which employees deliver food to cars in the drive-thru so they don’t have to wait until they pull up at the window.

In the third quarter of 2020, KFC’s drive-thru sales in the U.S. were 60% more than the same period in 2019. In response, the company, owned by Yum! Brands, designed its Next Generation prototype that includes a double drive-thru lane and cubbies for frictionless pickup.

“We think there’s a role for both,” says Brian Cahoe, chief development officer of the Louisville, Ky.-based brand. Customers, he points out, “want choice; they want flexibility.” That same customer who uses the cubby may use the drive-thru at less busy times.

The drive-thru of today — and tomorrow — has to be fast, accurate and easy to use.