How to Optimize a Professional Kitchen

Effective equipment placement can mean the difference between a kitchen that works well and one that just works. Outside factors such as available square footage, hood placement and utility connections will often define equipment placement, but placing equipment in the most logical and useful location can lead to a more effective back-of-the-house operation.

Even in those chain restaurants that try to standardize their design as much as possible, no two kitchens will ever be exactly alike. So, equipment placement demands a combination of tried-and-true procedures and flexibility. “Every project demands a fresh approach,” says Scott Levine, senior vice president of The Design Difference in Chevy Chase, Md., “but there are certainly some generally accepted principles; for example, putting taller pieces of equipment on the ends.”

Levine admits, however, that when the exigencies of the space demand it, “I definitely do deviate from this.”

The very first thing to analyze when locating equipment is the process flow: how food will come into and go out of the kitchen. In an optimal setup, “the food comes in the back, it hits the prep and production area, and then goes to where it’s being served. That’s the ideal, and you try to make it work that way,” says Keith Krause, designer and principal of Houston-based Surcana Food Service Design. 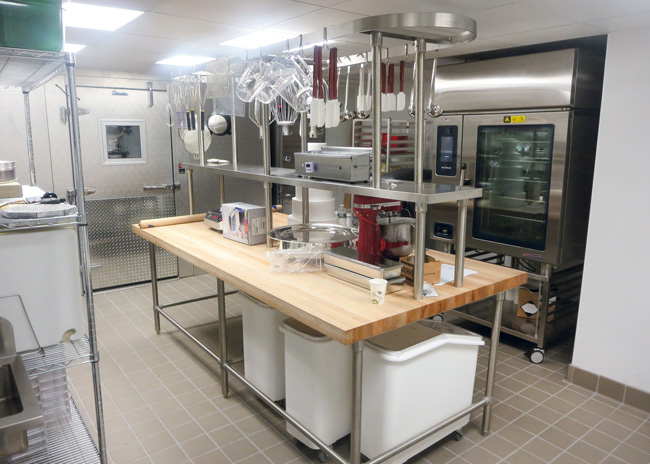 “The smooth and efficient flow of materials is critical to the success of any project, and a misstep here can affect labor costs, efficiency and productivity,” adds Kevin Sullivan, partner/principal, ColburnGuyette Foodservice Design, Rockland, Mass.

The next consideration is the menu, which will define the types of equipment necessary and their placement in relation to the production process. “Some projects are going to need a mixer; some won’t. Some will need a slicer. You always have to have the menu in mind when you’re designing,” says Jim Petersen, president and director of design for C.i.i. Food Service Design in Lapeer, Mich. But flexibility needs to be built into the design, he says, to accommodate future menu changes that may affect equipment usage. Sullivan agrees, noting that “given the frequency of how often menus change, flexibility in the back and front of house is crucial to any successful design.”

Menu and process flow combine to define the workflow through the prep and storage areas. Getting a handle on that workflow plays a critical role in effective design, and that takes comprehensive consultation with the operator. To fully understand the workflow, “regardless of how creative we are, the designer always needs to talk with the end user,” says Petersen.

Flexibility on the part of the designer is also important, notes Krause. “Once you look at the space,” he says, “you have to adapt to it because it doesn’t work out typically like you want it to.”

Ensuring a consistent flow of movement through the kitchen is critical, says Sullivan. “Proper equipment placement along the entire route should be carefully strategized and executed in order to minimize steps and maximize production. You look to avoid cross-traffic areas or instances where staff members would have to backtrack to complete a task,” he says. Krause says that becomes especially critical in tighter areas, such as prep areas for drive-thru or pickup, where “you want the [crew member] to get everything he needs with as little movement as possible.”

The workflow also must take into consideration not just production but also the human elements of supervision and communication between workers, according to Petersen. “We try not to have interior walls and to put equipment on walls whenever we can,” he says. “So if a supervisor or staff member is looking for someone to ask a question, they don’t have to walk around corners.”

Location of the kitchen in relation to other areas of the building can also be an important consideration, adds Petersen. “Depending on the project, you might require a special transport or intermediate holding [area] for both received goods coming in and solid waste going out,” he says. Or if the kitchen is in a nontraditional area such as in a basement or on a higher floor, there may be structural factors to consider, such as the necessity of having floors that can bear the weight of heavy kitchen equipment such as walk-in coolers. For kitchens on higher floors, Petersen notes, there may also be vertical transport issues. 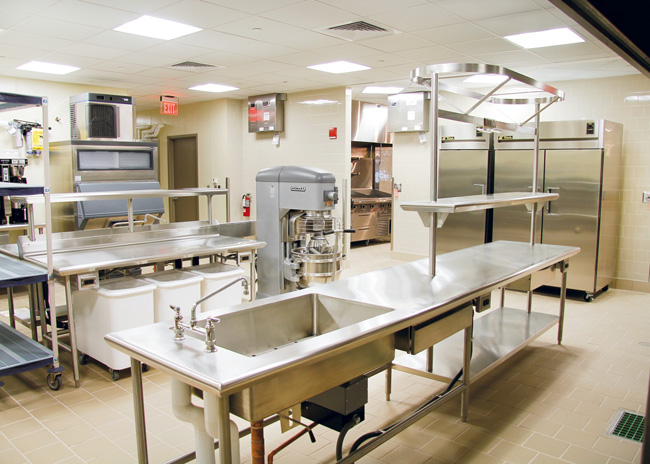 Ergonomic design is essential to a well-functioning kitchen. “When a workstation is properly arranged and the equipment is selected specifically to meet the needs of the station, the space will be productive and efficient for the employees,” says Sullivan.

In a best-case scenario, all the equipment and tools a chef or line cook needs will be within an arm’s reach or, at most, just a few steps away. Levine says his personal experience as a chef has been indispensable in shaping his ideas on kitchen design and equipment placement. “When looking at cooking stations, I use a cockpit mentality,” he says, “like what a pilot would have at his or her access. I want everything within reach, things at the right height and not too much motion, bending or twisting or walking to work that station and get the job done.”

Too often, however, ergonomic concerns are discarded for the sake of expediency. Sullivan notes that “often, operators are trying to wedge something in or repurpose an area that was previously used for a different task. This can lead to unnecessary steps, cross-traffic or backtracking.”

“I can’t stand when operators push equipment below a hood without any consideration for the engineering of the hood,” says Levine. “Some operators just think a hood is a hood, and as long as the equipment is under or near it, it’s fine.”

Safe placement is just as important as ergonomic placement to avoid any potential liability issues. “Placement should also consider safety, like not putting a sink adjacent to a fryer in case something should splash,” Levine says, adding that even small things can lead to big problems. “Even something as minor as where the control is for the waste disposer — is it in a location where you could have your hand in the disposer and touch the control at the same time, or is it far enough away that it would make that stretch unlikely?” And, he adds, unsafe working conditions can have a long-term effect on employee retention. “If people are constantly leaving because it’s an unsafe and uncomfortable work practice, there’s a cost there [in] workman’s comp and things like that,” he says.

Lately, there has been a tendency in some kitchens — especially as smaller, more stackable pieces of equipment come into broader usage — to move upward, stacking equipment or installing shelving as high as possible. While leveraging that unused air space might be tempting, it’s not without its issues. Levine says that he tries to avoid situations where the crew member has to reach high to shelve a plate or to pass a dish to the front of the house. “If you’re a short cook and you have to put a plate up on a pass-through that’s 60 inches up and 3 feet back,” he says, “by the end of your shift, your shoulder, back and neck are going to be painful.” When it comes to verticality, hood placement needs to be considered as well. For example, with a hood that’s hanging at a height of 6 feet, 6 inches, “if you have a 6 foot, 7 inch person or a 5 foot, 8 inch chef wearing an 8-foot-tall chef’s hat, obviously that’s a problem,” Petersen says.

Aisle space represents a crucial yet easy to overlook element in kitchen design; Krause calls it one of the biggest problems he sees with equipment placement. In several restaurants he has worked on, “the owners just want to pack in the equipment,” he says, leaving the crew little room to move. “They almost want them stuck at that position.” Besides the mobility issues, tight aisles can also lead to problems when equipment needs to be serviced or replaced. “If you’ve got one of those narrow aisles, you’re basically tearing down your whole kitchen to get [the equipment] out. We’ve replaced a lot of equipment in restaurants, and trying to figure out how to get stuff in and out has been quite a challenge,” Krause says. 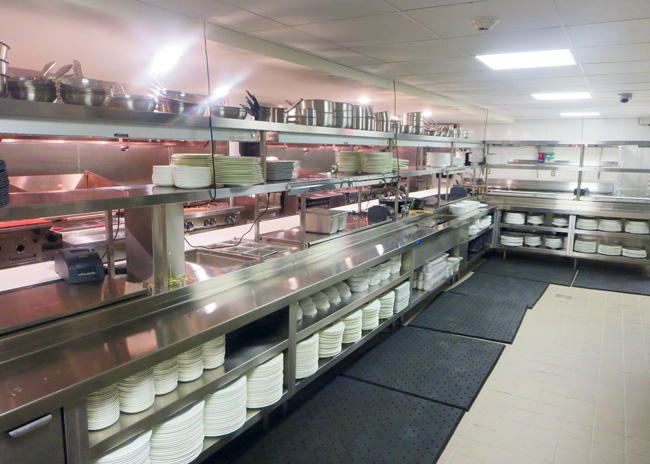 Designers today get a helping hand from equipment that can multitask or that can fit in a smaller space than previous models. Small footprint, stackable combi ovens are at the vanguard of this movement, not only because they save space but also because they allow one crew member to perform various cooking tasks. “A lot of people are thinking more in terms of stackable combis nowadays because they can get two very small footprint ovens in the footprint of one and it’s still [at] a usable height,” says Petersen. Smaller or undercounter refrigeration and storage units, which gained in popularity as food stations became ubiquitous, can also help in tight kitchen spaces. And an ever-expanding range of ventless equipment “allows us to be creative with equipment placement closer to designated production zones,” Sullivan says.