Can the Future of Diners Top the Segment’s Historical Success?

Mix one part comfort food and one part sociability with two parts nostalgia and you’ll have the recipe for the success of diners. This formula has worked for decades, but will it work in the future?

Diners inhabit a unique place in the hearts of Americans. Consumers are drawn to diners both for nostalgia and authenticity. Diners serve as a link to the past. While other restaurant styles have come and gone, diners have retained a familiar character. A diner’s features typically include booths, counter service, Formica, vinyl, chrome, and those enormous menus.

Diners generally fall into the breakfast restaurant category at data-reporting firms, which is how Datassential and IBIS both categorize the segment. This early daypart took a hit during the pandemic. Customers who normally stopped by in the morning for bacon, eggs, pancakes and endless coffee on their way to work disappeared. They were working from home.

Diners have traditionally been defined by inside, sit-down service. Very few have the possibility for outdoor dining. This means banning indoor dining (or reducing it to a small percent of normal) compromises profitability. 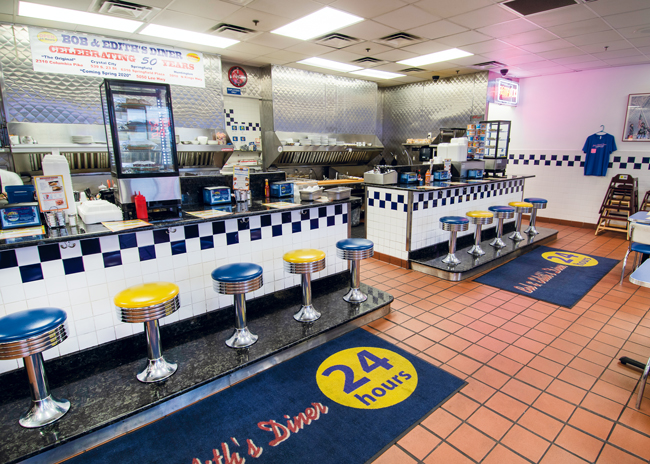 Bob & Edith’s Diner, a small chain located in Virginia, opened a fifth unit during the pandemic and is in the process of adding another to open in the fall of 2021. Two pandemic survival tactics were to partner with delivery companies and to revise the menu to make it more manageable.

As Diners Go, So Goes the Industry

Knowing these challenges, one would think diners might not have the rosiest of outlooks. It turns out that, on the whole, this is not the case. Datassential’s Firefly research, as of March 10, 2021, shows that statistics for diners track fairly consistently with those for all restaurants.

Diners have not been more likely than all restaurants to close. Datassential’s Firefly database shows that 12% have closed temporarily or permanently, in line with the situation for all restaurants during the time period.

Like all restaurants, nine in ten diners have been able to offer takeout, although fewer, by percentage, have offered delivery. Mark Brandau, product manager for industry research at Datassential, says this makes sense because of the reliance on the morning daypart and the fact that hot coffee and eggs or pancakes do not always deliver well.

Tick Tock Diner in New York City now offers dine-in and pickup service as well as delivery. The facility uses its website to encourage customers to learn about their social-distancing protocols before they arrive. There is not only social distancing in the dining area but also in the lines outside for those waiting to get in.

Tribeca’s Kitchen in Manhattan survived pandemic restrictions after a number of pivots. Named by Yelp as one of the top ten diners near Tribeca, it had one catastrophe after another. Two weeks after closing for business in March 2020, its owner, Andreas Koutsoudakis, died from COVID-19 complications. His son, Andreas Jr., took over the business and created what was described by the Tribeca Citizen as elaborate outdoor seating. This ended when there was a Con Ed gas leak in the street.

Undaunted, Koutsoudakis offered delivery until he was able to open up again at the beginning of this year.

Location was a problem for the Triple Crown Diner in Queens. A competitor across the street was legally in Long Island, where the regulations were looser, and was able to serve patrons inside. Indoor dining was banned in the Queens borough of New York City. Across the way in Long Island, it was not. Even when Triple Crown could open with 25% capacity, owner Thano Fatsis said it was not enough to cover the bills.

Triple Crown survived, however, and opened for indoor dining in mid-February when regulations increased to 50% occupancy.

In April of 2012, FE&S wrote an article about a small chain called 5 & Diner, around since 1989 in Phoenix. It had been purchased in 2008 by a couple looking to expand their restaurant segment portfolio.

The first thing the new owners did when they purchased the diner was streamline the prototype both in size and number of seats, actions that may have helped the diner to survive the past year. Space went between 3,800 and 4,400 square feet to between 2,800 and 3,200 square feet. Seats went from 110 to 90. They kept the nostalgic ’50s design.

That extra spacing helped the owners with social distancing guidelines when the pandemic hit. Ryan Ladden, district manager of 5 & Diner, strikes an upbeat chord when he explains the changes made to meet pandemic challenges in the flagship Phoenix unit. When indoor dining was first shut down, they had tents outside. These were eventually removed because of the Arizona heat, but they served as a stopgap.

When they finally could serve customers inside again, 5 & Diner installed plexiglass dividers between all the booths. This means they can have 100% capacity in the booth area.

As a counter service solution, the restaurant removed the seats of every other bar stool and put flowers in the stanchions to create some space between patrons.

The diner already offered takeout with pickup but has added curbside pickup options, as well as delivery. They use five third-party delivery companies. 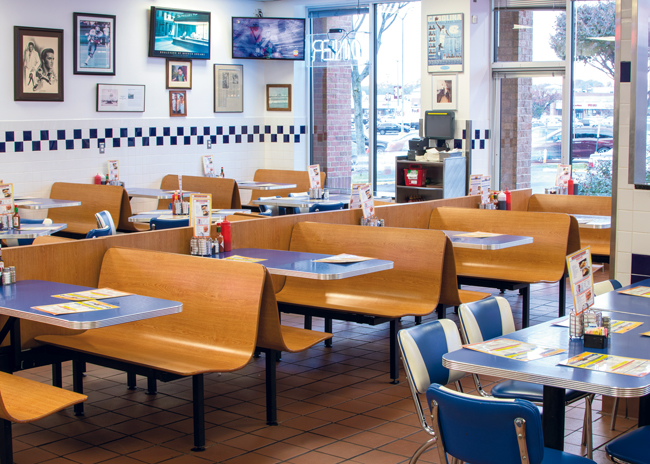 IBIS World, a company that provides insights on industry segments, published an Industry Spotlight Report called “Breakfast Restaurants & Diners Industry in the U.S.” in March. It is the report’s prognosis that the “diner industry is anticipated to exhibit a strong recovery, swiftly exceeding
pre-pandemic revenue.”

Datassential’s Mark Brandau agrees. “It’s very likely this segment will recover just as well as the entire industry stands to recover when the pandemic is behind us. Many diners and midscale restaurants, including chains and independent locations, have made the adjustments in the past year to off-premises service models where they make sense. As a result, diners have not been more likely to close than any other restaurant type.

“There will be plenty of pent-up demand for our old diner experiences and still enough open restaurants to accommodate that demand,” Brandau says. “Here and there, it might make sense for some of those diners to keep some of the convenient touches they have added, like curbside to-go or takeout, which can only add some incremental sales. Overall, this is a segment that will probably just look forward to getting back to business as usual.”

In addition to comfort food, sociability and nostalgia, diner owners have exhibited another success factor: an entrepreneurial response to pandemic challenges, with a flexible approach to doing what is necessary to survive. As a result, they have not only survived they have ensured a positive future.

A look at what service styles operators in the diner segment have ramped up compared to all restaurant segments. 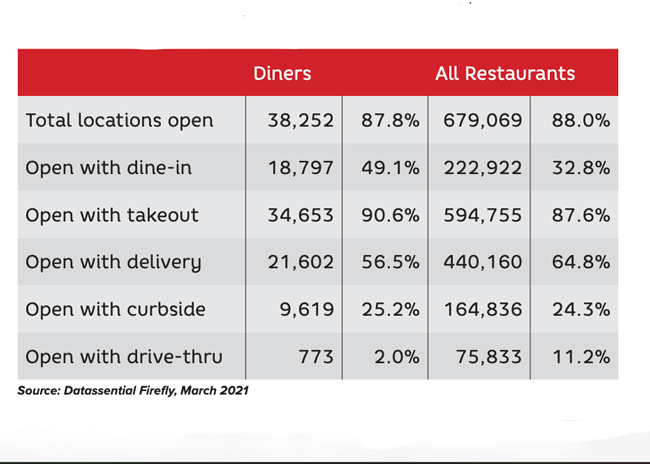