The quick shift that many school foodservice departments had to make during the pandemic is well documented, with some districts moving to takeout-style service for students taking classes from home and others shutting down completely as their schools closed. As students began to return to class, the first order of business for many foodservice directors was to rejigger their seating patterns to ensure social distancing. Andy Power is the director of nutrition for St. Thomas More School, a private school in Munster, Ind., with preschool to 8th grade students. His school brought in larger, 8-foot round tables to allow four to six students to sit at one table. Some of the older students were moved to 6-foot rectangular tables spaced out horizontally. “So instead of having one lunchroom,” he says, “we actually separated them out in three rooms.”

For other schools, the answer has been distributed dining. A trend that had already started before the pandemic, it’s a fancy term for taking the food to the students rather than having them come to a central location, such as a cafeteria, for their meals. The move away from traditional cafeteria lines was in motion for years, says David Magill, a school foodservice consultant based in San Francisco. “Inline service has gone the way of the dinosaur, as far as I’m concerned,” he says. The development of school breakfast programs started this shift, Magill says, with “mobile carts in hallways that bring breakfast right to the classroom. They’ll just wheel it in or leave it outside the classroom door; kids grab their breakfast and go back in.”

Serving students in nontraditional areas means a whole new set of issues regarding transporting and holding food, Bean says, noting that “coordination with the architect to review walkways, curbs and elevation changes is also important.”

The move toward distributed dining in larger schools runs parallel to a broader trend in society, says Scott Reitano, principal of the Reitano Design Group in Indianapolis. “Kids are eating everywhere; we’re all eating everywhere,” he says. This has led to a relaxation in terms of where operators can serve food in schools. Along with that lessening of restrictions, he says, schools are establishing satellite units, such as fitness bars located near the athletic areas. “We’re still going to be able to serve lunch out of them,” Reitano says, “but we’re going to gear the menu more toward the nutritionally sound scenario, whether that’s acai bowls or smoothies or protein shakes.”

Those in charge of food selection at many school foodservice operations today are torn between what students want and what the facility can reasonably produce given time, labor and cost considerations. Andrew Chandler, district manager for Metz Culinary Management in Dallas, Pa., says that due to competition from c-stores and other quick-serve outlets, “We have to get ourselves out of the normal comfort zone of the traditional cafeteria.”

And since kids today have palates that are more sophisticated than ever, items that have not traditionally been considered school food can move briskly in certain areas. For example, Reitano points to one of his clients, a high school in suburban Chicago that offers a sushi bar three times per week and moves more than 200 servings each time it’s menued.

Due to labor and food safety considerations, however, Bean says some schools continue to use prepared foods — even an increase in prepared foods is not unheard of today. “This seems to be driven by two factors: the desire to reduce labor and concerns over the handling of raw protein products such as ground beef or chicken,” he says. 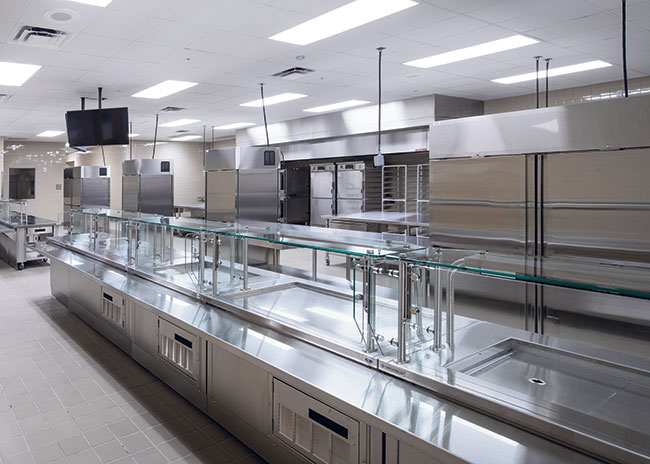 The serving area at Summerlake Elementary School in Winter Garden, Fla., was designed to serve more than 830 students.

Back to the Cafeteria

While school foodservice may face many of the same post-pandemic challenges as commercial foodservice, some of its challenges moving forward will be unique to the segment. Jim Dickson, senior vice president for Metz Culinary Management’s education and corporate dining division, says one of the major challenges will be “to get students back in the cafeteria and buying meals again because for the past 12 months, meals have been free.”

Finding and retaining crew members has always been an issue with school foodservice and now looks to be an even greater issue, according to Chandler. One of his main concerns is the increase in competition from nonfoodservice entities such as Amazon. “In my area in Eastern Pennsylvania and New Jersey, we have huge corporate giants that are coming into our communities and offering hourly wages we simply can’t compete with,” he says. “We’re feeling that pain now.”

Joe Urban, director of nutrition services for Greenville County Schools in Greenville, S.C., calls employment and retention his greatest concern. “Our program normally employs over 750 staff members,” he says. “That number dropped to around 650 when people chose not to work when the pandemic was at its height.” He estimates that he’s still down about 60 employees from his average staff size.

The changes in serving styles and in the food itself naturally influence equipment needs, both long and short term. At St. Thomas More, moving students into three rooms necessitated a rethinking of equipment, says Power. “Heating cabinets became more of a focal point for us,” he says. “And now we’re looking at covered speed racks and additional busser trays. We’re looking at all those things to provide proper hot and cold holding. From a batch-food safety perspective, we have to start planning long term for things like dual-use ovens that can be converted to a holding cabinet if need be.”

Chandler agrees, noting he has lately seen more emphasis on “hot and cold holding equipment that is user friendly.” He also sees increased value in using mobile food transport carts in which “we can house the meals that we produce in an appealing manner.”

For those schools where scratch cooking remains prevalent, Reitano suggests carefully considering refrigeration needs. “Ten years ago, we would make sure we had more frozen storage and less cooler storage. Now we’re moving toward more cooler and a little less freezer,” he says.

Even those minor items that were once thought as standard in school foodservice — such as trays, cutlery and dishes — have had to be rethought. Power’s school used to have self-service silverware, “but now we actually put the silverware on their tray to eliminate as many touch points as possible,” he says. “And we had to buy enough trays to get us through an entire service in case the dishwasher broke down.” 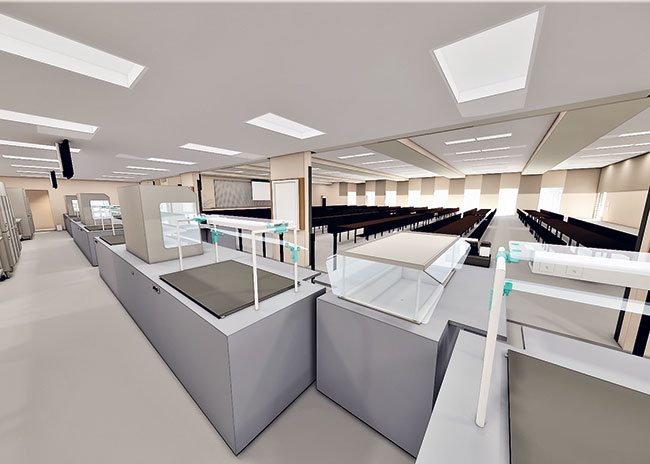 In this rendering for a new middle school in Orange County, Fla., coolers are placed near high-traffic service areas for maximum accessibility.

Many of the items called into service during the pandemic, such as breath guards and mobile carts, won’t be leaving schools any time soon. But how the kitchens will be equipped in the future will partly depend on how deeply schools get back into serving scratch-made items. Dickson says his “wish list” for equipment for a new school foodservice installation would be geared toward more fresh preparation and include “a flattop griddle, an air fryer or two, a char griddle, a panini press and a good pizza oven.”

Bean feels labor- and energy-saving equipment, such as exhaust hoods that adjust to cooking loads to reduce energy usage or powered pot wash sinks or utensil washers, would be a good kitchen addition.

Chandler says technology will have a major impact on equipment, and it’s all based around getting food to the students in the most convenient manner. For the future, “I think about technology and utilization of apps, cellphones, online order platforms, mobile stations, carts, kiosks and wireless POS,” he says. A serving line at Kokomo Wallace Elementary School in Kokomo, Ind., shows the importance of designing serving lines at an appropriate height level for younger students.

More than ever, appearance is important in school foodservice, both in the layout of the facility and the food served. For some schools, that may mean a more commercial design in the foodservice areas to compete with c-stores, QSRs and other off-campus temptations. Reitano says that he recently “had a superintendent say to me, ‘I’m tired of seeing Starbucks in my school.’ That’s why you’re seeing more of what I call ‘Starbuckian’ concept cafes” in schools.

And as more food is packed for consumption outside the traditional cafeteria location, “how we utilize single-serve packaging is really important,” says Chandler. “We need to make sure that the food is appealing from a visual standpoint.”

If there’s any upside to what school foodservice has gone through in the past year, it might be that it demolished one of the oldest myths about the quality of school food. “When the food gets delivered or the kids take bags home,” Magill says, “parents look at it and say, ‘Is this what you’re getting at school? You’re telling me it’s garbage. This is really good stuff!’” Parents get to see that the school food “isn’t all canned ravioli — it’s scratch-cooked pot pies or barbecue pork on home-baked buns,” he adds. “It’s an amazing public relations gesture.” Special Dietary Needs On top of its new challenges, school foodservice still must deal with students with special dietary needs. “From a diet perspective, people are most often looking to reduce gluten and dairy,” says Tina Reddington, Sodexo North America’s national manager, nutrition and wellness, universities and schools. With food allergies in kids on the rise, she notes a greater need to customize and remove components from menus.

“Also, diets are changing the way people are eating, and this requires more menu customization in schools,” Reddington says. “Restaurants have been doing this for a long time, and now it’s trickling down to schools. From a provider standpoint, it’s important to meet student needs and provide an inclusive environment so they can safely eat with their friends.”

Sodexo’s solution to the challenge is its Simple Serving program, a food allergy platform with menu items that are free of the top food allergens: peanuts, tree nuts, eggs, milk, wheat, soy and shellfish, along with gluten. “If students have one allergy, they are more likely to have a second one,” Reddington says.

What’s the biggest thing school foodservice has learned from the pandemic?

Philip Bean, Foodservice Design Associates
Many school kitchens became mini-commissaries to meet the challenges of remote learning. From a design standpoint, the lessons learned are the need for school kitchens to easily reconfigure and adapt to this very different production mode.

Scott Reitano,Reitano Design Group
They learned — and maybe the world has learned — that school foodservice is a community resource. And these operators learned more than they thought they could.

Andy Power, St. Thomas More School
You learn to be very nimble. Events like this show you that you have to be able to turn on a dime.

David Magill, Consultant
School foodservice has become much more of a community. They’re taking the knowledge they’ve learned and are sharing it with others.

Jim Dickson, Metz Culinary Management
School foodservice workers — whether managers, cooks, dishwashers or whatever — have finally earned a new level of respect for what they do and the commitment they have to serve meals to students.