The post-pandemic future of the foodservice industry remains uncertain. But for most operations, the future will likely involve simpler, streamlined menus; more prepackaged grab-and-go fare; more emphasis on delivery; and greater utilization of commissaries and ghost kitchens.

All of that implies an overhaul of the way restaurant operators organize their footprints. Nowhere does that apply more than in planning for cold storage.

“It’s been a busy couple of years of changes, leading up to and including 2020,” says Kurt Maschari, business unit manager for equipment sales at BEST Restaurant Equipment & Design in Columbus, Ohio. “We’ve seen a lot of customers separating front-of-house areas for dine-in guests, grab-and-go customers and delivery. Dine-in seating has decreased, and that space has been reallocated.”

Now, Maschari says, the front of the house may feature both hot holding cases and refrigerated lockers for delivery-service drivers to pick up orders. These lockers, which guests typically open with a numerical code they receive via the operation’s mobile app, are appearing more frequently at the entrances to dining rooms in universities and other noncommercial sectors, encouraging diners to choose meals to go.

Operators continue to install grab-and-go refrigerated cases, making it easy for customers to add beverages and other check-building impulse purchases when they come in to pick up meals. 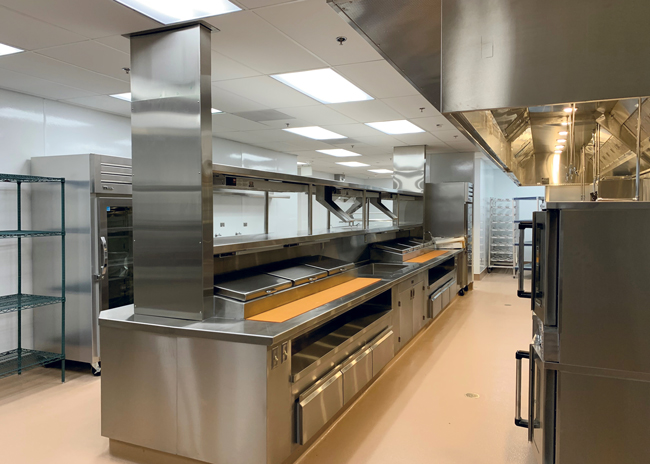 To get heat and noise out of the kitchen at the new Choctaw Cultural Center in Durant, Okla., RJS + Associates chose a chef’s line with a centralized remote refrigeration rack. The remote system saves energy and makes for easier serviceability. Photos courtesy Rick Sevieri, FCSI, RJS + Associates

Back of the House: Streamlining Prep Processes

For the back of the house, the rethinking has been even more radical. “Operators have to allow for prepared food products to be held longer before they get delivered or are picked up by the end user,” explains Tim Agosti, FCSI, principal at Arctic Food Service Design in Anchorage, Alaska. “They’re moving toward products that can be kept cold longer in frozen or refrigerated format, then brought up to temperature in smaller quantities to minimize waste.”

“A lot of restaurants have gone from traditional kitchens to split kitchens,” Maschari says, meaning a kitchen with some shared equipment but two separate makelines for two different service models: dine-in and takeout. “Our bigger chain customers are using commissaries and ghost kitchens to do their prep, then retherming the product in the restaurant. Operators are adding small refrigerated prep tables, with product storage underneath, for quick assembly of ingredients. That way, they can push more product to keep up with the demand from both online orders and walk-in customers.” 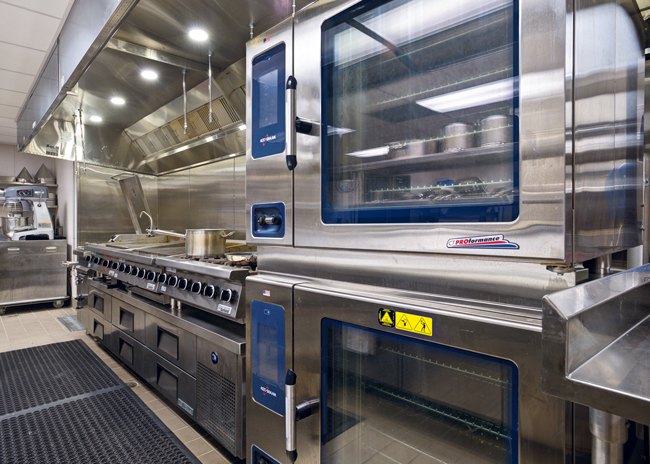 To boost efficiency, grill refrigeration was added under the cookline during a renovation to add room service support to the cafe kitchen at the Albany Medical South Clinical Campus in Albany, N.Y. The changes in menus and prep systems often lead to greater use of blast chillers and blast freezers. “In the U.S. market, operators were always looking at the up-front cost,” notes Rick Sevieri, FCSI, president of RJS & Associates Integrated Food Service Design in Old Lyme, Conn. “But they’re not afraid anymore; blast chillers and freezers are more the standard. As rents go up and kitchens get smaller, operators are looking at the components they need to produce food most efficiently, and blast freezers and chillers built into workstations are becoming more prevalent.”

The new emphasis on convenient access to ingredients also extends to the design of walk-ins, which “are being reorganized,” Maschari notes. “Additional doors are being put in — primarily added to refrigerators. You’re able to use the walk-in almost as a reach-in — a versatile piece of equipment versus just a long-term storage solution. And some manufacturers will build walk-ins with a compartment for a roll-through blast chiller; that’s obviously more expensive than buying a stand-alone blast chiller, but it also has a lot more capacity.”

Finally, cold prep rooms, often featuring swinging doors for easy access to the walk-in, are trending in larger operations. These rooms, with staff laboring in an ambient temperature that’s usually about 55 degrees F, “help with both food longevity and taste because food remains fresher longer,” says Andrew Carroll, president of Idaho-based BSR Equipment. “They’re appropriate for central kitchens that are prepping for multiple locations that may require travel time. With the huge demand for food delivery and ghost or support kitchens, these rooms can make turnaround time much faster.”

Chilled prep rooms (also known as garde-manger) enhance the efficiency of blast chillers and freezers, Maschari says. “Product quality and shelf life are greatly increased as opposed to bringing food to a 75 degree F room for an hour’s prep and then back into the cooler,” he points out. “You can use the blast chiller not just for cooked food but also to bring down the temperature of vegetables or a sandwich. A university making 200 deli wraps can put them in the blast chiller, then store them, and get a longer shelf life and a better product for the end user.”

What to Know Before You Invest in New Refrigeration

“The EPA’s mandate for better-performing, more environmentally friendly refrigerants has been the driver for savings on operating costs,” says Carroll. “Historically, that efficiency came with a high initial price tag, but with the government’s influence, the change has been radical.” Rebate programs for purchases of the most energy-efficient equipment add to an operator’s upfront cost savings.

Sevieri mentions the addition of smart controllers that further enhance energy efficiency and notify the operator, facility manager or chef if the unit loses power; they’re now typically a standard feature, he notes, rather than an expensive option.

And Maschari adds that smaller compressors allow units to be front-breathing. Eliminating the 2-inch air gap in the back means each unit has more usable interior space. Even better, units now last longer, he says; warranties are typically seven years rather than the former standard of five years. 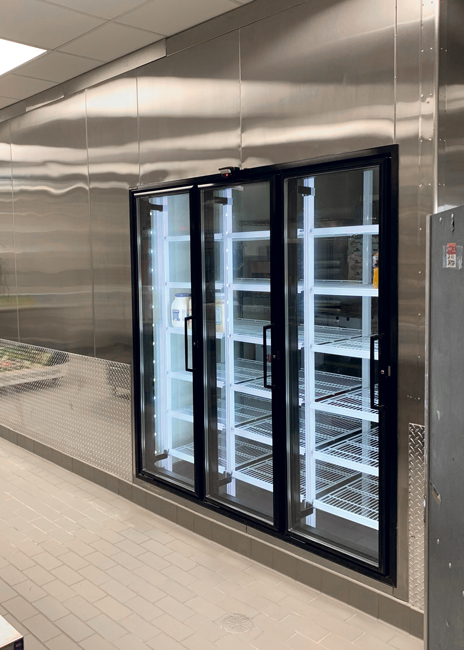 Glass-fronted reach-ins are utilized as a chef’s cooler in the production kitchen of the Ella T. Grasso Technical High School in Groton, Conn. 2. Choose refrigeration with a view to getting heat and noise out of the kitchen.

Agosti notes that new, efficient refrigerants have enabled greater use of scroll compressors that generate less heat and are quieter to operate.

Other technological advances in commercial kitchens, though, have actually added heat to the mix, Agosti says. “Ventless hood systems filter the air, but they direct heat from the cooking process back into the room, adding to the HVAC load,” he explains.

The most efficient way to eliminate the heat and noise put out by refrigeration equipment is to put the compressor and condenser elsewhere — in another room, on the building’s roof or outdoors at ground level. Remote refrigeration is typically used for walk-ins, chilled prep rooms and often for large blast chillers. It’s rare for less expensive wall cases or undercounter units but may be used for long lineups of prep tables. “If you have a line of three pizza prep tables, going remote will allow you to pick up 36 inches in usable cold space,” Maschari points out.

For undercounter units with self-contained refrigeration, consider the ambient conditions. “If you’re going to place the undercounter cold storage near a hot, greasy cookline and you have low ceilings, you might want to think about a bottom-mount compressor, not a top mount,” Sevieri suggests.

All refrigeration produces water condensate as a byproduct, and operators must deal with this moisture. “In some cases, you can get away with an electric evaporator pan, but they are prone to failure,” says Carroll. “On new construction, it’s important to plan a building floor-sink drain to drain the condensate off the evaporator.”

Check electrical service before installing new refrigeration equipment. “Confirm power requirements at the site,” Sevieri says. “Work with the design team and engineers to make sure the facility has higher voltage and amperage to handle evaporators within coolers.”

Standard grounded three-prong 115-volt electrical outlets on a dedicated circuit are sufficient for most self-contained commercial refrigeration. Three-door reach-in freezers and blast chillers require higher than the standard 115-volt circuits, notes Sevieri. Be aware that long prep tables may now come with two condensers and thus two plugs instead of one. (It’s because of regulatory limitations on the amount of R290 refrigerant used within each refrigeration system.)

Exposed electrical wiring in a walk-in is a pet peeve of Sevieri, who points out that custom-built panelized walk-ins are basically miniature versions of houses — and, like houses, can have plumbing and electrical conduit built into the wall. A walk-in with concealed electrical wiring is more sanitary, and “the health department is going to love it,” he promises.