Building the Flexible Cookline of the Future

With all the changes buffeting foodservice today, an adaptable cookline is more important than ever.

No matter how the menus, ingredients or equipment may change, the cookline will always be the center of the kitchen. While every other part of the foodservice operation has been rethought over the past few years, the cookline has stayed relatively consistent. But is today’s cookline the right design for the future?

Steve Forbes, executive chef and managing partner of Proper 21 and Proper 21K in Washington, D.C., says today’s cookline faces problems in three main, interconnected areas: labor, volume and menu. “You just can’t have as many employees as you used to have,” he says. “If you don’t have bodies, you don’t have the volume. Because you don’t have the volume, you also have to limit the amount of product you have in-house.” That means increased cross-utilization of products already in stock, which can lead to revised, and sometimes limited, menus. 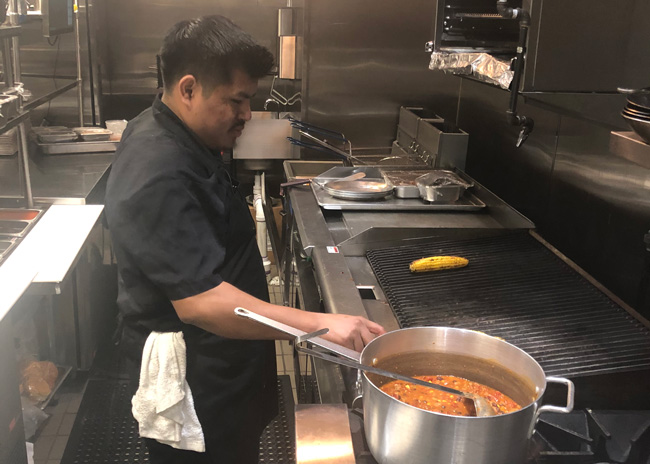 Reduced menus and fewer employees have altered cookline usage a bit. Such is the case at Proper 21K restaurant. 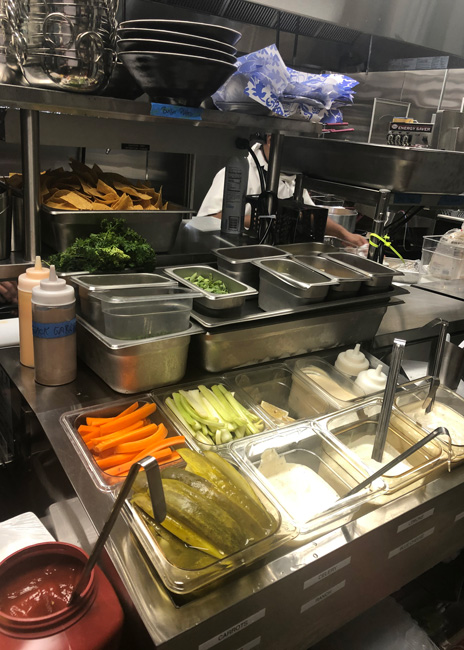 Cooklines of the future will likely need to accommodate more off- premises business, which may mean some adjustments for packaging, ingredients and other elements to round out the to-go orders.As foodservice operations shifted into survival mode at the start of the pandemic, many of them reduced their menus — either by cutting back the number of dishes they offer or reducing the ingredients that go into those dishes. Forbes says that at his first location, “we probably knocked our menu in half.” But regular diners have forced his operation to rethink that decision. “We’re fueled by regulars,” he says, who have found the streamlined menu “a bit boring, and they’re craving a larger menu. So we’re probably at 70% of what we used to be,” he says, adding that eventually, “I think we will go back to full menus. I’d be shocked if we didn’t.”

Chipotle Mexican Grill, on the other hand, has always had a fairly compact menu, so the restaurant chain has not had to make any menu changes, says Tabassum Zalotrawala, chief development officer for the fast-casual concept. For operations with extensive menus, though, shrinking the menu might actually be a long-term plus, she says, as doing so may help eliminate some bottlenecks in the production process. “To that extent, their streamlined menus are probably a breath of fresh air for the efficiency of their cooklines.”

Richard Eisenbarth, FCSI, president emeritus of Cini-Little International in Germantown, Md., believes that speed of service will be a defining factor for menus in the future. “My gut would tell me we’re at the new normal,” he says. “I think speed of service is going to be paramount so [operators] can make a greater profit with menu items they can produce faster.”

For some, the decision about what items operators keep on the menu will come down to sheer economics. “If they can shrink [the menu] and it enables them to compete with shrinking profit margins, they can focus on the 20% of the menu that provides 80% of their profit margin,” says Ray Soucie, senior project manager for Webb Foodservice Design. Soucie is based in the Portland, Ore., market. “And they have a better chance of [not only] getting past the pandemic, but also getting back into the black.”

The other major factor affecting the cookline is the increase in takeout and delivery, which was forcing operators to rethink their processes even before the pandemic hit. This has underscored the importance of having a cookline that can accommodate takeout business, Eisenbarth says. “There’s been so much advance ordering, even before COVID,” he says. “It’s become a big issue on how that’s done. People get very upset if they see entrees ready to go and they’re standing in line waiting because the takeout orders are being processed.”

But Forbes believes it’s really just a change in where the food winds up. “I don’t think it’s a major shift because for the most part, you’re making the same food. It’s just being served in different vessels,” he says.

Chris Wair, design principal for Reitano Design Group in Indianapolis, agrees, noting that “if you take a general quick-serve or casual-dining restaurant, they may not be doing any different volume. But the business is now going out the back door,” he says. Nevertheless, Wair feels that may still necessitate some adjustments to the cookline. “You may need a different cookline to help with takeout product, or you may simply need an efficient makeline or packaging line.” 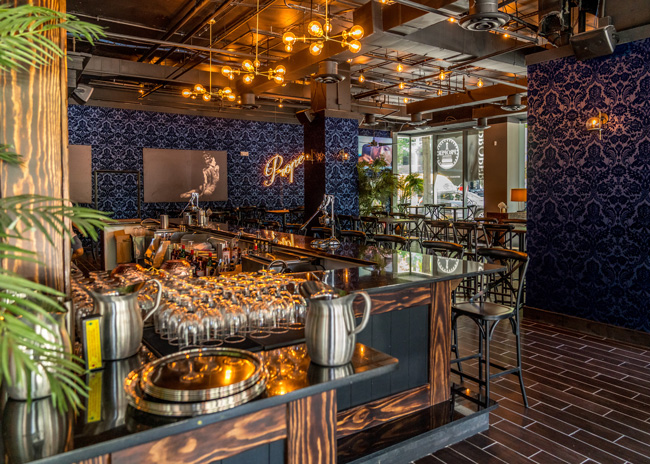 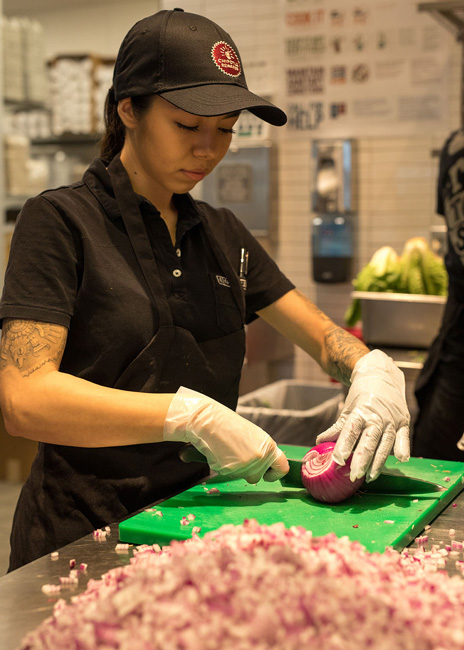 Chipotle Mexican Grill's makeline is getting a twin setup to handle digital orders. In the perfect cookline, adaptability would be the driving force behind equipment acquisition and design. “You want your equipment to adapt to your menu,” says Wair. But operators can stretch their equipment only so far. “Hopefully, you’re not starting out as a German schnitzel restaurant and wanting to go to Chinese.”

Optimally, the original procurement process includes flexible equipment. “It’s always possible to build in flexibility to the cookline,” Soucie says. “I actually use it as one of my initial goals, because I believe it’s a misnomer that all cooklines should be designed for specific menus.”

Budgetary considerations can also serve as a driver for thinking about a flexible cookline, says Peter Christensen, principal of Christensen Consultants in San Jose, Calif. “Sometimes the initial budget for your project doesn’t allow for all the equipment that you need.”

With flexibility and future cookline changes in mind, equipment choices become more critical than ever. Items such as combi ovens become major players. The ubiquitous combi oven “is probably the most versatile piece of equipment in our holster right now,” says Eisenbarth. “It can toast, braise, broil, bake. It can do everything.”

Wair agrees, noting that many of the noncommercial projects he’s worked on recently have sought to swap fryers for combis, especially as higherquality ovenable food products become available. “That’s a big switch from what I’m used to,” he says. “We’re going to combi ovens for ovenable fries and things of that nature.”

High-speed ovens represent another popular choice because they can perform a variety of functions in a comparatively small footprint. “These are accelerated pieces of cooking equipment that can do multi-style menus,” says Soucie. He also recommends cook-and-hold ovens for larger facilities, and for the mom-and-pop operations, even “rice cookers and crockpots are still a viable solution for keeping food hot and cold,” he says.

Mobile ventless equipment can also help make cooklines more flexible. Since this equipment often doesn’t require a venting hood or permanent utility connections, it becomes easier for operators to shake up their cooklines should the need arise. “You may decide next year that you need to do something that is not really compatible with your [current] equipment,” says Wair. “In that case, ventless starts to look very popular.”

On the cold side, Soucie notes, operators can specify undercounter refrigerators that roll in and out and that they can replace with different equipment in the future should circumstances change.

With operators placing an increased emphasis on sustainability, electric equipment continues to become a more appealing prospect on cooklines across a variety of segments. “We’re going down the path of electric kitchens,” says Soucie. “They’re cooler and more energy efficient. It’s being made part of the code slowly but surely.”

Christensen isn’t totally sold on electric appliances yet. The first problem to overcome, he says, is the comfort level chefs have with traditional gas equipment. “Most of the chefs I know like working on gas because it’s controllable. You can see the flame, and they understand how it works.”

But he says that an unpredictable power supply is a more concerning problem to him. “With the electrical problems we’ve had in California recently with power outages, brownouts and everything else, I’m not sure this the right direction for a kitchen,” Christensen says. 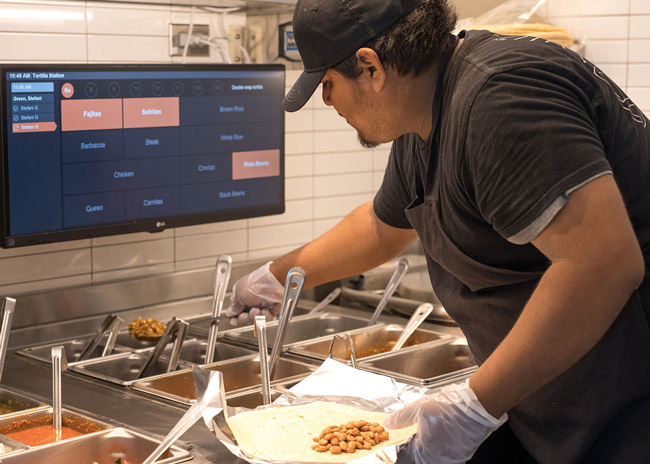 Chipotle Mexican Grill takes a unique approach to rethinking how it prepares and delivers food to customers. While keeping its main cookline intact, the fast-casual chain has instituted a second makeline, called its Digital Kitchen, devoted strictly to digital orders.

Tabassum Zalotrawala, Chipotle’s chief development officer, says it’s “an exact replica of our front line in its makeup and structure. It accommodates all of the ingredients you see on the front line except it’s dedicated to our digital orders.”

The second makelines were originally used for catering, fax orders and overflow prep when the restaurants got busy. In 2018, the chain began to convert those lines to handle digital orders only. Having a separate makeline for digital orders, Zalotrawala says, “alleviates the bottlenecks you might have if all orders were prepared at the front line.”

With the exception of a few units located in food courts, Zalotrawala says, “we are very, very close to completing [conversion in] our entire fleet of restaurants and preparing ourselves for the growth in digital business.”

The idea of interconnecting equipment to make for a more efficient cookline has been bounced around for years. While it sounds like a good idea, it’s still not much further along than the drawingboard stage.

“I wish somebody would invent something that communicates across all platforms,” says Eisenbarth. “That’s still a little ways off.”

The one area where technology helps prep stations and cooklines run more efficiently is in the selfdiagnostic stage, where the equipment monitors itself and alerts the operator to any problems. “In some cases, it really works, especially in terms of food safety,” says Christensen. “You [can] have your coolers and freezers connected to various programs that allow them to be monitored from outside your facility. Connectivity is valuable there.”

Design and layout serve as critical factors in building flexibility into the cookline. Some designers will take a tip from ghost kitchens, food trucks and other operations where space is limited and items have to be in very close proximity to each other. To maximize every inch of available space, equipment that can stack continues to be grow in popularity. And should the menu change, stackable equipment — such as compact combi ovens — can be easily moved or replaced.

Designers are also thinking smaller, says Wair. “Instead of doing a 10-pan combi, for instance, we may do a double stack of two 6-pan units. Or we may do a half-size combi or some smaller footprint,” he says.

But packing equipment into a small area is a balancing act, says Eisenbarth: “How much can you cram into a small space but also ensure that it’s efficiently laid out so it becomes an efficient work center?”

Equipment on casters with quick-connect gas hoses can be useful, says Christensen, who estimates that “85% to 90% of equipment can be put on casters.” An additional benefit of this type of equipment is that it can easily be disconnected and moved for cleaning, he says.

Planning for future changes in the cookline also means thinking about the ventilation system, utilities and fire suppression. That might mean installing a slightly longer hood, Christensen says, or “putting in a fire suppression system that has more general coverage as opposed to a system that has nozzles pointed at specific pieces of equipment,” he says.