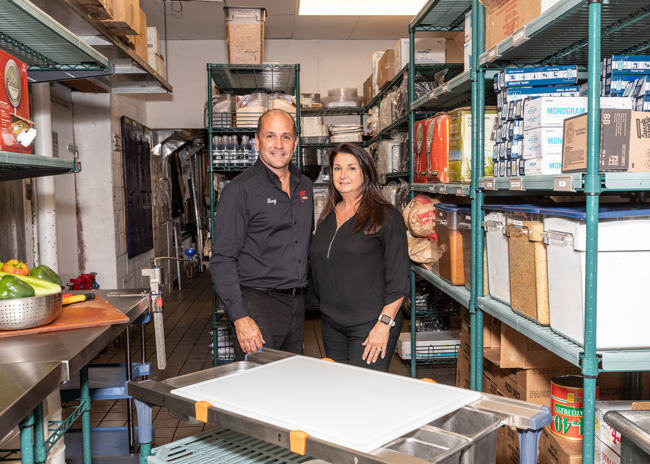 This growing Italian chain gained a new takeout and delivery expo station as part of an awe-inspiring back-of-the-house refresh as the winner of FE&S’ Kitchen Storage Makeover Contest.

“When you open a restaurant, you do it on a fixed budget — almost no budget,” says Tony DiSilvestro of YNOT Italian, based in Virginia Beach, Va. He owns and runs the business with his wife Cyndi and brother Harry, who is a partner. The owners can relate to tight operating budgets because that’s exactly how the company grew from one restaurant in 1993 to a 7-store operation on the cusp of franchising.

As success created a need for greater dining capacity with that first restaurant, DiSilvestro expanded the dining room. The piecemeal approach meant taking over three different leased spaces in the restaurant’s strip mall location over time. The company’s first site now has a dining room that seats 150 people instead of the original 75-seat space. That same patchwork approach extended to back-of-the-house needs, adding shelving as the need arose and often looking overhead for any unused vertical space to stack more product and packaging.

That first restaurant eventually grew to 5,000 square feet. What didn’t grow was the 1,000 square feet dedicated to the back of the house. “Things have always been a little cramped,” says DiSilvestro.

Those constricted spaces at that first location ultimately proved a win for judges looking to acknowledge storage spaces in dire need of a refresh as part of the annual Foodservice Equipment & Supplies kitchen storage makeover. 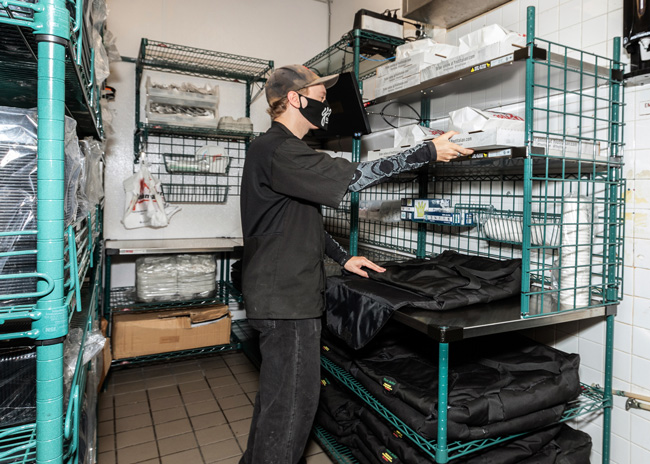 Heated shelving keeps food hot in the new takeout and delivery staging area. The owners plan to use this setup as the baseline for future stores.

Timing is everything, right? In the midst of COVID-19, when perfecting off-premises service became a top priority, the owners of YNOT Italian were more than ready for a refresh of the initial restaurant’s takeout expo area. The 7-store Italian eatery chain had a robust takeout and delivery program even prior to the coronavirus, led by its pizza offering, but some of the behind-the-scenes support components were admittedly lacking, says DiSilvestro.

“Controlled chaos” is how DiSilvestro aptly describes the back-of-the-house staging area for takeout and delivery prior to the makeover at the Virginia Beach, Va., store. One of the main problems was the expo’s location; delivery drivers had to walk through the main cookline to access the delivery hub. At a restaurant with 75 employees, fluidly moving around each other in a constricted space was not easy. 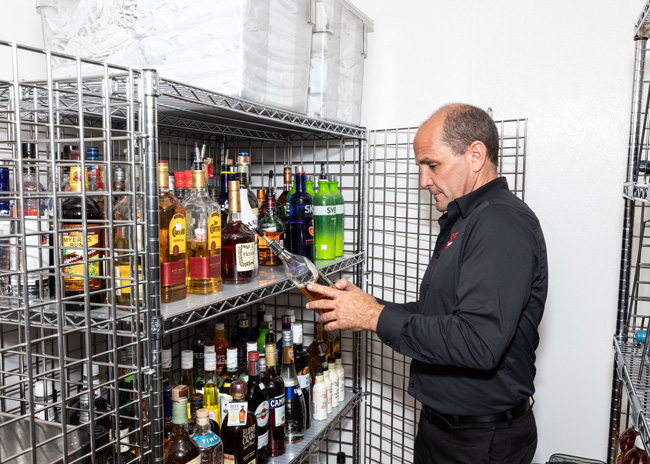 The storage area for beer, wine and liquor received a major transformation. Before the new shelving arrived, the owners installed new flooring and repainted. The room doubles as a small workspace.

There was also a larger understanding among the owners that delivery and takeout would become even more important to the success of his business. DiSilvestro had been thinking about opening an express concept for a while with the intent to offer only takeout and delivery. “It’s been in the planning stage for a couple years,” he says. “We just never pulled the trigger.” The pandemic expedited the idea, particularly when pandemic economics led him to secure a favorable lease agreement on a location about 20 minutes from the Virginia Beach store. YNOT Italian intends to open the express site before the end of 2020. At 1,200 square feet, it’s a fraction of the 5,000-square-foot restaurant and adds to the desire of the owners to master the small-space equation. 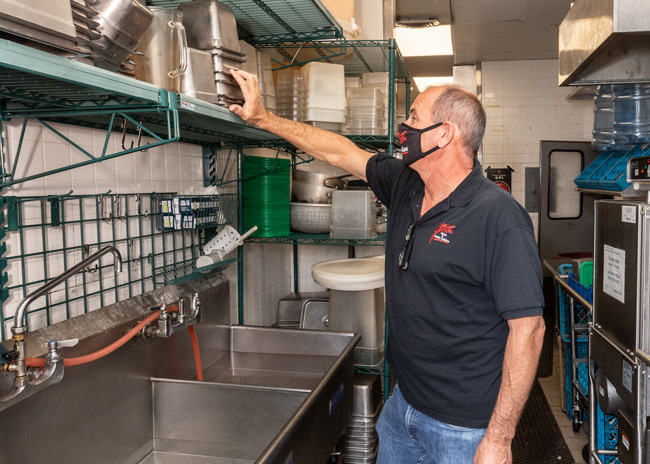 The focus in the warewashing area was to make items more accessible and relocate heavy pots and pans so they were no longer stored in hard-to-reach spots overhead.

The delivery and takeout expo transformation at the Virginia Beach store started with relocating the area to the back of the house — not that there was more square footage to work with in the back. The entire back-of-the-house space squeezes in warewashing, dry storage, a secured storage space for locked liquor and a prep area for dough. That prep area also doubles as the gelato production area, where staff make homemade gelato for all stores. Even though the newly carved-out space remains tight, having it concretely defined for takeout and delivery proved a win.

The expo space now includes heated shelving to keep food hot, plenty of storage for pizza boxes and delivery bags, and room for staging. “It’s very streamlined,” DiSilvestro says of the newly improved space. What may have been haphazardly placed before is now 100% clearly labeled, accessible and easy to find.

“It’s been a game changer for us,” Cyndi DiSilvestro says of the more organized storage area. “It makes life easier in terms of being able to see everything as you stock and the labels defining it all.” 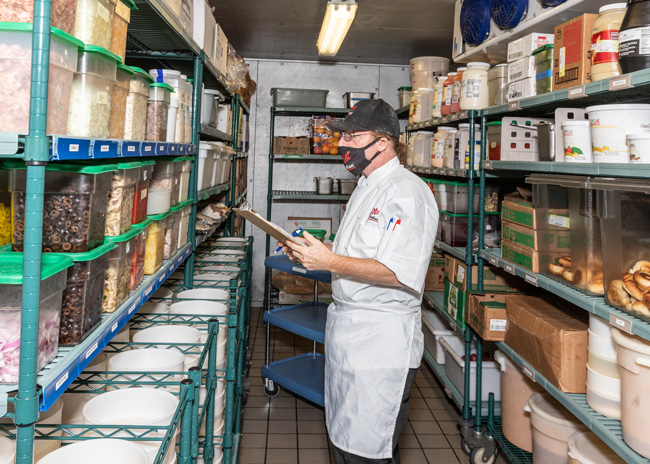 Custom dough carts in the walk-in cooler nest efficiently into shelving and help prevent mishaps as the dough rises overnight. 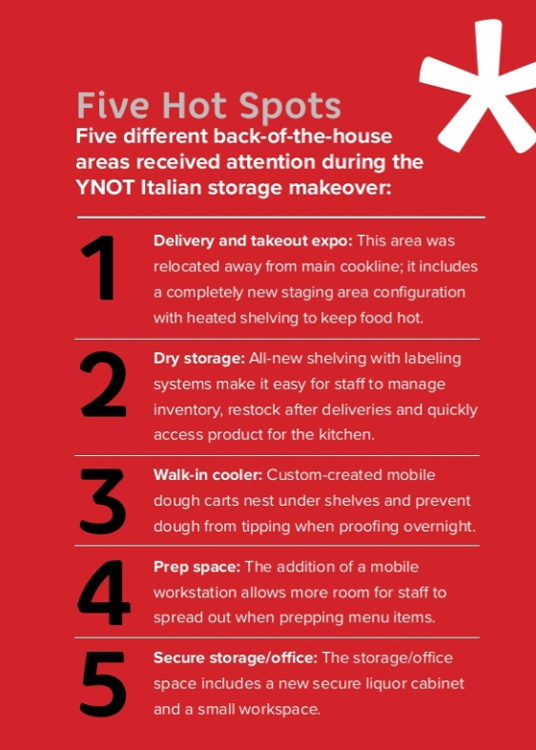 Another problem in need of a solution at YNOT Italian surrounded proofing the pizza dough. YNOT Italian staff routinely fill no less than 400 bins with balls of pizza dough for proofing, roughly enough to support this single location for a week; the restaurant makes an average of 90 pizzas a day.

Prior to the makeover, the process involved staff carrying the bins to the cooler to proof. During that overnight process, the dough would rise and often bump into the bin above, tipping the stack and often knocking a few on the floor. It was a balancing act to have the bins perfectly align so that all dough bins survived the night. In fact, it was such a predictable fate to find dough on the floor upon entering the cooler in the morning, the owners accepted that product waste as part of the cost of doing business.

In addition to the risk of dough toppling, staff were also hauling the bins by armful from the cooler to the designated pizza-making spot, which created additional obstacles in traversing through the space efficiently. The problem was resolved by creating a custom cart solution with standard equipment components. The carts succinctly incorporate the bins and also establish a better first-in, first-out approach for product. The cart height equals a stack of 10 dough bins; the top three shelves were removed to provide chambers for the dough bins to remain upright during the proofing process. The carts nest under the new shelves in the walk-in cooler. Each cart holds 60 bins of dough, and YNOT Italian now has 10 total carts in their arsenal, allowing for a total of 600 bins. 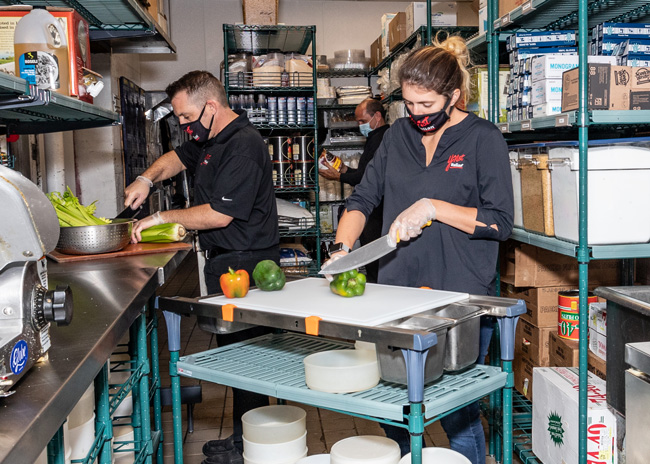 The flow from prep to cooler to front of the house now maximizes efficiency and ergonomics as carts flow seamlessly to each station. Staff can now also easily transport a cart of dough to the front instead of carrying three bins at time. The new setup saves trips to the cooler and keeps the product steadier while it proofs, helping to eliminate lost yield. Yes, the dough does still rise and hit the bins above, but it is far less likely to tip over in the cooler.

“Overall, it’s just an amazing transformation,” Tony DiSilvestro says. The mobile carts provide convenient proofing storage, he notes, have been a big win already and have saved the company money in what was once lost product.

There’s also been thoughts about extending the delivery and takeout platform to possibly include a locker system for pickup orders. And the new express store will be closely watched as a test concept that could potentially fill in the gaps in service areas as YNOT Italian expands into a franchise system. The new back-of-the-house delivery staging expo area will also become the baseline as the chain pursues franchising its first location in Richmond, Va., in 2021. The intent is to then branch out into the Raleigh-Durham area of North Carolina.