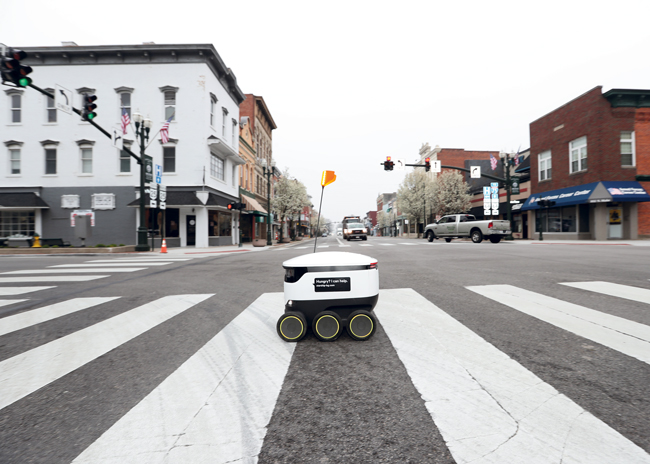 The State of Foodservice Automation

Robots have not taken over the foodservice operating sector as quickly as some once thought, but the innovations and integration continue to expand in myriad ways.

Not so long ago, some pundits were predicting automation would revolutionize foodservice. In a sort of “Restaurant 3000” scenario, robot servers would take customers’ orders and send them to the kitchen, where machines would produce meals and load them onto automatic delivery carts, which would whisk the food back to the table. Things haven’t quite worked out that way.

The San Francisco Bay Area — the epicenter of the tech world — has been the testing ground for many foodservice automation applications, most of which have found it rough going. There was Eatsa, a modern take on the classic automat, which opened in San Francisco in 2015 and branched out to New York and Washington, D.C. By 2019, however, they had closed all units by January 2019 and transformed into technology-focused Brightloom. Cafe X, a high-volume automatic coffee-making robot, closed its trio of urban locations in January 2020 and is now down to kiosks at the San Francisco and San Jose airports. Zume Pizza, which delivered robot-made pizzas, also shut down in January this year after it burned through its reported initial investment of more than $375 million and transformed into Zume, which produces face masks and packaging items.

So why haven’t large-scale food-producing robots gained more traction in foodservice? Their advantages — consistency, high-volume production, labor savings and no time off — would seem to make them an attractive proposition to operators. But John Franke, founder and president of Franke Culinary Consulting in Dallas, notes that while the COVID-19 pandemic has accelerated the need for more contactless food production systems, human interaction cannot be completely avoided. “At the end of the day, there’s still human interaction that has to happen. There are things that people want or need that maybe can’t be modified by a robot,” he says.

Today’s “have it your way” customer mentality presents a problem for machines, adds Juan Martinez, principal and founder of PROFITALITY, a Miami-based consulting firm. “Automated machines are very good at doing the same thing over and over again, but they’re not very good at flexibility,” he says.

Joseph Schumaker, FCSI, president and CEO of Foodspace in Santa Clara, Calif., finds an inherent problem with some of the food-making robots. These machines “still require the same prep time and same amount of labor because you have to fill the hoppers with food that’s already cut and prepped,” he says.

The comparatively steep initial cost of some equipment has also made it less attractive to cash-strapped restaurateurs. And today, with higher unemployment in the industry, there’s also a “people aspect” to consider, says Franke. “If you have the choice to spend $50,000 on a robot or to hire somebody, your conscience is going to say, ‘Let me hire a cook. At least I’m giving somebody a job.’” 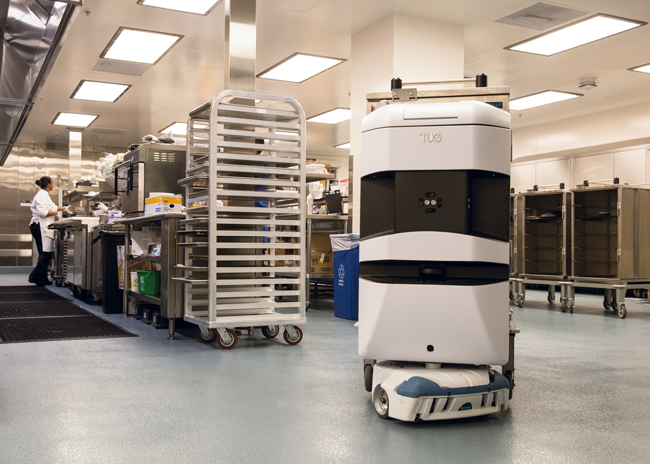 Robots assist foodservice staff at UCSF Health by both delivering food and returning dirty trays to the kitchen. Photo courtesy of UCSF Health.

The Robot’s At the Door

The use of delivery robots, however, represents one area showing growth. This is especially the case for operations with fairly compact delivery areas. These robots free up crew members from running repetitive errands, both on-site and off.

At the Mission Bay campus of UCSF Health in San Francisco, a fleet of six delivery robots assists the Nutrition and Food Services department. “Ours is a hotel-style dining program,” says Dan Henroid, director of Food and Nutrition Services. “We use our robots to get the food up in 45 minutes or less. We also use the robots to bring the dirty trays back down to the kitchen for cleaning and sanitizing.” When a robot returns with dirty trays, it leaves them outside the dishroom and sends an alert to the dishroom operator to come pick them up. The robot then returns to the kitchen for its next pickup. During downtime in the evening, when meals aren’t being served, the robot crew transitions to the hospital’s linen team for laundry pickup and delivery.

The robot system has been especially helpful during the pandemic, Henroid says. “I’m not having to worry about robots getting sick,” he says. He adds that with a system such as this, elevators are critical. “You’ve got to have enough vertical transportation to make this all work.” Occasionally, the robots can stall due to unexpected construction or repair work in hallways. To solve that problem, Henroid is working with the robot manufacturer on a better response system to handle situations where the units run into unforeseen delays.

The delivery robots represent just the tip of the automatic iceberg for this operation, according to Henroid. He’s also been investigating (but hasn’t yet committed to) some larger, automatic food-preparation machines, such as an automatic ramen maker.

Bowling Green State University in Bowling Green, Ohio, has a fleet of robots that deliver food items to students on campus, making it the first campus in the state with an autonomous delivery service, according to Michael Paulus, campus director of Dining for BGSU Dining by Chartwells. Customers place and pay for orders online, and the system dispatches the robot to the delivery addresses, where buyers unlock the units using their mobile phones.

Before the pandemic, Bowling Green’s robots averaged slightly less than 1,000 deliveries per day from a variety of on-campus dining spots and c-stores, Paulus says. The robots, which replaced a human delivery team, have helped with staffing issues. These days, he says, “we couldn’t hire delivery people if we wanted to. Students are dedicating themselves to studies as opposed to part-time jobs.” The robots work long hours — 7:30 a.m. to 2:00 a.m. — and also alleviate the security problem of allowing third-party delivery services access to residence halls.

The Bowling Green robots have become a hit not only with college students but also with the at-large community. “With the transition to the COVID closure and social distancing requirements, the community asked us to expand,” Paulus says. So now the robots deliver to locations within a four-mile radius of the campus. During the early part of the pandemic, he says, social media feeds showed local children playing a “robot safari” game, counting the number of robots they could find around town.

That social media effort has resulted in an unexpected benefit for the program: Paulus says the campus marketing department found the robotic delivery service has gotten almost 2 million social media hits since its inception. “It just keeps expanding our story and brings us awareness and publicity,” he says.

On a smaller scale, there’s one area where automation has made a real change: ordering systems. Ordering kiosks are now ubiquitous in fast-food restaurants and are also in a significant number of fast-casual outlets. That has led to a rethinking of front-of-the-house design, with many restaurants now having dedicated pickup areas and fewer manned cashier stations.

Concerns about cleaning common surfaces in the coronavirus era, though, might make touch-screen ordering stations obsolete, sending many operations toward greater usage of app-based ordering systems. “The pandemic’s going to accelerate that,” says Schumaker. “If we had 8% to 10% adoption rates [for app-based systems] in the past, I believe we’re going to break 50% adoption rates as facilities begin to reopen.”

Before the pandemic, Franke would have predicted tablets would be the next big way to order. Now, he sees QR code-based menus as a viable alternative. “You come in with your phone, put that QR code in and order from that,” he says. With many operations having to change their menus frequently due to shifting municipal regulations and highly fluctuating consumer demand, app- or QR code-based menu systems offer flexibility that can be a considerable money saver in the long run. Whatever the ordering method might be, Franke says, “paper menus are a thing of the past.”

Where next for automation? Schumaker sees an opportunity in the back of the house for automated systems that can help connect the many different pieces of kitchen equipment. Many manufacturers have their own proprietary systems, he says. “What we don’t have is something that collects all this data and creates something meaningful that operators can use to increase the customer experience and increase their profit lines,” he says.

Martinez thinks that automation may increase if labor costs continue to rise and if pandemic-related regulations change the workforce. “There are new tasks you didn’t have before — more strident and frequent cleaning and sanitizing requirements that impact how you use labor,” he says. “So maybe the labor demand is going to be there, which is fertile ground for automation.” 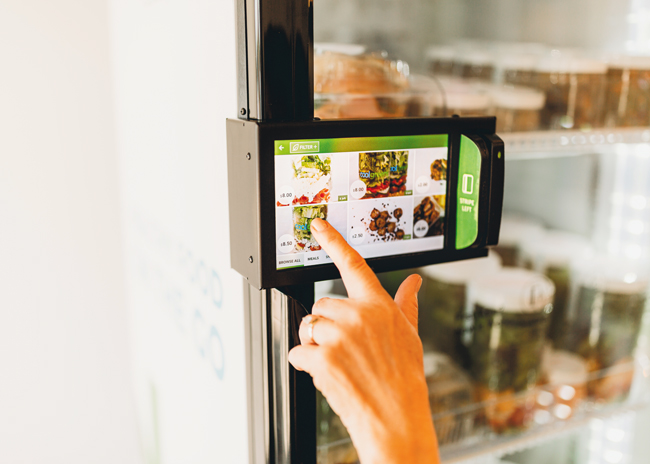 Coolgreens Markets offer an upscale approach to food vending. Office buildings were the original target market but Coolgreens has shifted its approach to now split its focus on office and residential spaces.

Flexibility represents one of the biggest advantages of automated systems. When Coolgreens decided to get into remote selling, the fast-casual restaurant chain ensured that flexibility was built into its system.

Coolgreens currently has six smart fridges, called Coolgreens Markets, operating in Texas in the Dallas-Fort Worth area. The smart fridges are literally four shelves with an RFID reader under each shelf, explains Todd Madlener, president of Coolgreens, a healthy eating fast-casual chain based in Oklahoma. The coolers are stocked with salads, grain bowls and wraps staff prepare in the chain’s brick-and-mortar locations. Customers make their selections on a touch screen, swipe their credit cards, open the door and remove the product. “Once the door closes, the market processes the remaining inventory and charges you for what you remove. Ten seconds later, that machine is ready for the next guest,” he says.

Unlike other food vending systems, which use an elaborate elevator-and-conveyor system to dispense selected food items, the Coolgreens smart fridges are literally grab and go. The lack of heavy internal machinery makes the fridges, with their 24-inch-by-24-inch footprint, lighter and easier to move. A fridge “can easily be moved by one individual with an appliance dolly,” Madlener says. “You can wheel it into an elevator and put it anywhere in the building that has a power outlet.”

That movability has come in handy as Coolgreens has had to rethink its machine placement since starting the program. “Our first machine went live March 1, 2020, in a call center in Bedford, Texas,” says Madlener. And due to the coronavirus, he says, “the 900 people who worked there promptly left.” So now Coolgreens aims for a 50-50 office-to-residential mix, placing machines in high-traffic areas inside apartment or condo buildings.

Changing the placement of the units also forced Coolgreens to rethink the product mix in the machines. The residential machines need more sandwiches and wraps, and fewer beverages and snacks. “Individuals who live in those residences already have those [beverage and snack] products upstairs in their apartment or condo,” Madlener says. “We did not anticipate initially that there would be such a difference in product mix between retail space and residential space.”