How would you design a kitchen knowing  that customers will never see it?

While these factors may also apply to ghost kitchen design, a utilitarian approach trumps them all. Also called dark, cloud, virtual or smart kitchens, ghost kitchens are often earmarked for delivery or catering, with the primary design requirements being speed, accuracy and efficiency.

Ghost kitchen design is as diverse as restaurant concepts themselves. Operators have a choice of building to fit their concept from the ground up, using a deserted kitchen or extra capacity in an existing kitchen, or sharing space with other concepts.

The common denominator with ghost kitchens is the lack of on-premises dining. Some ghost kitchen operations use third-party delivery systems like Grubhub or DoorDash, but a few have their own delivery teams. Very few allow customers to pick up their own orders from the ghost kitchen.

Citing the growth trend of delivery, the report adds, “The expansion of centralized kitchens or meal prep will support the ongoing growth of app-based meal delivery services.”

Cousins Subs has 97 locations, 92 of which are in Wisconsin. When delivery volume increased, the company built its own 1,800-square-foot ghost kitchen in a downtown Milwaukee warehouse.

It was built specifically for the concept’s model, says Joe Ferguson, vice president of development at Cousins. The design incudes a double makeline for assembling sandwiches. “We were able to double the capacity of the sandwich line by increasing the amount of equipment there, using one side for orders going out for delivery and the other for large catering orders,” he says. The layout is similar to what exists in a typical store, just larger. The facility also included double the number of fryers found in a typical Cousins location.

Overall, the cost to build the ghost kitchen was less than a typical Cousins Subs since the company didn’t have to pay for front-of-the-house furnishings, Ferguson says. This cost savings is a benefit to all ghost kitchen operators.

Ferguson explains another big advantage for Cousins Subs: They were able to put the freezers and coolers close to the production area. “Sometimes in the stores, these get stuck in the back because that’s the only space they will fit,” he says. “We put them right next to where we need the product. That minimizes the number of steps needed for staff to work.”

Currently, Cousins Subs uses its own staff for production and for delivery. 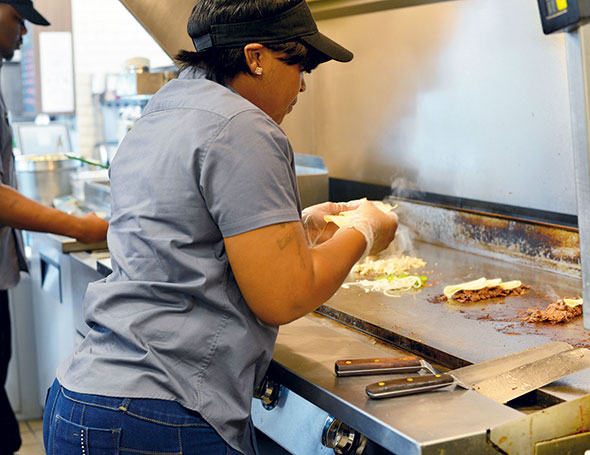 California-based Kitchen United offers shared ghost kitchen space. The company’s tagline is “Many restaurants. One roof. All to go.”

The shared kitchen space is optimized for operators to serve off-premises demand, i.e., delivery and catering, says Meredith Sandland, chief operating officer of Kitchen United. “When you imagine the design of the facility, it’s all about making the drivers’ lives easier, facilitating easier pickup, staging catering, absolutely everything. It’s about how you make it easy for an operator to service demand.”

Kitchen United facilities use a flexible modular system, like a commissary except that each operator has their own four-wall area. Operators rent space and services through Kitchen United’s membership model. The module units are mostly standardized but can be made to accommodate each restaurant’s operational flow, Sandland explains.

Operators can choose from three different sizes: standard, deluxe and custom, which is an extra-large space. One common takeout area supports all the concepts. Kitchen United is one of the few ghost kitchens that allows customers to pick up orders they have placed online.

To date, Kitchen United operates three facilities, one in Pasadena, Calif.; another in Scottsdale, Ariz.; and the third in Chicago. The company has more on the drawing board. 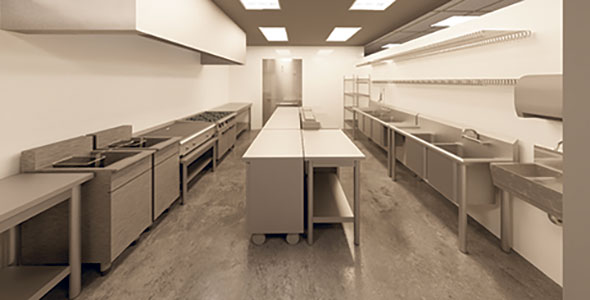 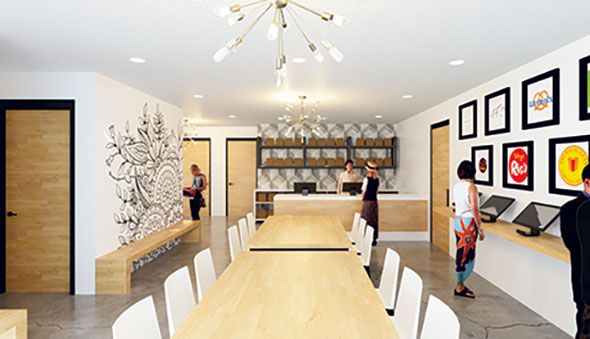 This rendering shows Kitchen United’s pickup center, where staff hand orders to third-party delivery people and consumers who have ordered online. Each operation functioning from a Kitchen United facility has its own dry storage, walk-in cooler and freezer. Shared elements include a storage area for packaging materials near the packaging area, as well as utility and service components — for example, a water heater. Kitchen United manages all food pickup and walk-in orders.

The first two facilities were built in former cooking schools. Another pending location will be in a warehouse, and another will be in an office building.

The space an operator occupies in a ghost kitchen tends to be smaller and may require less equipment, Fuqua says. Additionally, the operation can pare down the menu from the one it uses in the concept’s traditional locations. “For instance,” he says, “we’re not offering smoothies, shakes or fries out of our ghost kitchen. They don’t travel well. This eliminates the need for fry ovens or blenders.” And since the space at Kitchen United includes back-of the-house services like sanitizing and dish washing, B.GOOD doesn’t need as many sinks in its area of the ghost kitchen.

B.GOOD’s design and operations team worked with Kitchen United’s designers to fit the equipment in the space. Since the space is not consumer-facing, Fuqua notes, the most important factors when it comes to design are efficiency and accuracy. Speed of production is the key. He says he has seen some ghost kitchens that have conveyer belts that send orders to the pickup area, increasing operational efficiency.

The three biggest challenges of working out of a ghost kitchen, Fuqua says, are working within a smaller footprint, not being able to rely on organic foot traffic and not having a physical presence to help grow brand awareness. “That being said,” he adds, “they present a huge opportunity. Ultimately, anything that helps us deliver on evolving consumer expectations and meet consumers where they are is something we consider a priority. We recognize this disruption is not going to end with ghost kitchens, and we are constantly looking at technology to understand and anticipate how it will impact our business.”

Lettuce Entertain You Enterprises (LEYE), the restaurant group that operates more than 100 restaurants, has entered into a unique partnership with Bon Appétit magazine.

Bon Appétit, Delivered offers a menu of dishes from the magazine’s test kitchen. The gourmet offerings are seasonal, and according to Scott Barton, executive partner and divisional president of LEYE, this “allows people who don’t have time or the desire to cook to enjoy some of these recipes.” 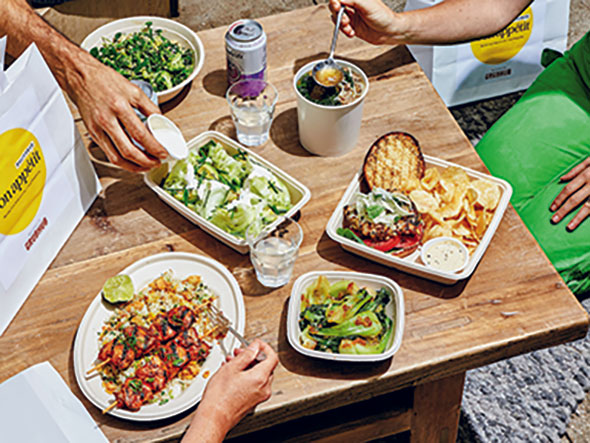 Both locations were selected because they have excess capacity. The equipment is traditional. “They are very high-end kitchens that had all of the equipment we needed,” Barton explains. “The layout may not be 100 percent what we would do if we had a clean slate, but we couldn’t ask for a nicer kitchen or better equipment.”

Barton says that one of the drawbacks with virtual restaurants is not having the human connection like you would in a storefront. “We’re working on different ideas that I’m not quite ready to share yet, but we will be able to give guests a level of hospitality within the delivery experience,” he says.

The concepts vary in theme and include a bowl concept, an Italian offering, an Asian-themed concept, a chicken-based offering, an elevated take on fast food, a veggie-forward health-conscious offering, a burger option and a Mexican concept.

“We are very different from other [ghost kitchen concepts] in the market because we are only hosting our own brands,” Alp Franko, founder of The Local Culinary. “We are not open to the public, and we are not open to having any other companies use our facilities.”

The kitchen divides into different sections, Franko explains. “We do not divide by concept; we divide by cold station, hot station, prep station and storage station,” he says. The prep area absorbs half the kitchen space, he adds, noting that speed is paramount to his business model. “When we receive an order, we need to prepare the food within six or seven minutes.”

The facility also has designated areas for packaging, holding and pickup. Successful delivery depends on maintaining the right conditions from production to pickup, Franko says. The Local Culinary relies on three critical stages for each order: packaging, labeling/branding and temperature control. Each brand maintains its own social media account, and the typical consumer would not necessarily connect the brands when ordering through third-party delivery models.

Chipotle views itself as operating as its own ghost kitchen.

Scott Boatwright, chief restaurant officer at Chipotle, says the chain has 2,600 ghost kitchens in the form of the second makelines the chain has built into its brick-and-mortar kitchens to accommodate off-premises orders. They are considered virtual since the lines do not produce any menu items for on-premises consumption.

The approach melds with the chain’s “Chipotlanes,” which allow online and app customers to pick up orders at a drive-thru window. Customers cannot place orders via the Chipotlanes, though. “It’s very important for Chipotle to have this digital ecosystem that doesn’t interrupt the primary business. We’ll continue to grow that business aggressively,” Boatwright says.