After a shakeout, the remaining players in the frozen yogurt industry find success with innovative offerings, overseas expansion and a unique business model. 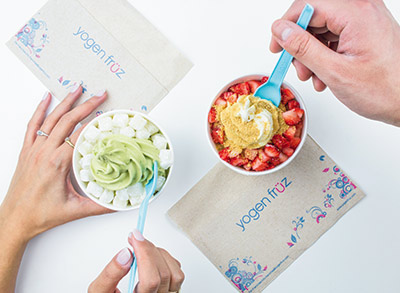 The frozen yogurt industry is not iced out, but has undergone quite a few changes since its beginning almost a half century ago. Health-conscious consumers mainly fuel growth, although interest is starting to swirl as operators offer innovative flavors and unique toppings.

"What we're seeing overall with the marketplace is the aftermath of a very ambitious and aggressive expansion in the frozen yogurt category," says Darren Tristano, an industry analyst based in the Chicago area. "And what you often see is [that] it's a land grab, with everyone looking for locations, opening stores and aggressively franchising."

As this trend continues, froyo shops will continue shutting their doors and others will struggle in the marketplace. "I don't know that we'll see equilibrium in the future," says Tristano. "It may take a while for some shops to close and allow the demand to shift back to remaining units and to a level where it's more sustainable and profitable."

"The self-service model, like Pinkberry, Red Mango and Yogurtland, is more viable," says Tristano. "The weigh-and-pay format works well, because by the time customers add their yogurt and toppings, there is more opportunity for higher price points."

Self-serve stores have an advantage over full-service stores in that they can reduce wage costs, according to IBISWorld. Since employees do not take orders, the self-serve format requires fewer employees per store and less training. In addition, the self-serve format caters to the rising do-it-yourself trend, where consumers customize and personalize their orders.

The barrier to entry for frozen yogurt shops also remains somewhat low. "From what we've seen from many locations, six frozen yogurt machines with each having two different flavors is the right number," says Tristano. "This provides customers with the ability to create a combination of flavors."

While sweet flavors remain prominent, an increasing number of chains now include sour options as well as more unique flavors of yogurt. In the last five years, the tart version, which is derived from yogurt and has less sugar, has taken off. 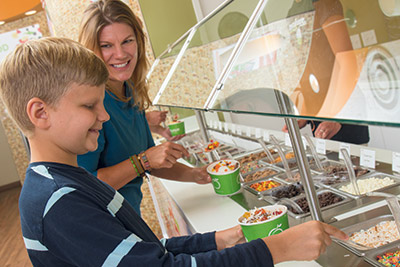 Two-deep topping pans increase accessibility for Peachwave customers and simplify maintenance.Peachwave is not only distinguishable as one of the first self-serve frozen yogurt concepts, but it also is unique in its business approach. Opening its doors in 2009, the 54-unit chain offers a different format than a franchise.

"Peachwave is a trademark licensing model instead of a franchise," says co-owner/CEO Boyd Feltman. "That means we do not charge franchise fees associated with initial licensing, royalties or marketing and we sell our proprietary and branded products at bonafide wholesale prices to our licensed store owners. We believe it's a more resilient model than franchising."

Feltman purchased Peachwave in April of 2015 from its founder, Kevin Moon, who recognized the potential of froyo's self-serve model early on with his first location in Edmond, Okla.

A finance executive with General Electric, Feltman fell in love with the Peachwave brand and was looking for a path back home to his family in Michigan. His first store in Holland, Mich., was so successful that he opened a second location near Grand Rapids, Mich., the same year.

With Moon pulling back from the business, Feltman spent eight months considering his strategy and crunching numbers before making an offer to purchase the frozen yogurt company with a partner investor who prefers to remain anonymous.

In addition to its licensing model, Peachwave's fresh daily production also helps distinguish the concept from others in the froyo space. Each store kitchen serves as a factory, with milk sourced locally. "We have proprietary yogurt and gelato mixes, flavors and recipes, with the yogurt and gelato frozen only moments before it's served for maximum creaminess and freshness," says Feltman.

The chain's stores are transitioning from water- to air-cooled yogurt machines. "Water-cooled units require additional install expenses, and we've found them to be more expensive to operate and repair over time," says Feltman. "It's another way we can pull down the up-front investment for operators and provide a better return on investment."

The chain also is moving from deli-style topping bars to two-deep topping pans to increase topping accessibility. The slim line setup also is easier to maintain, Feltman says. This equipment conversion coincides with Peachwave's ambitious growth plans, which include enhanced marketing to find new licensees for new store growth, the first time for this chain.

Honing in on Homemade 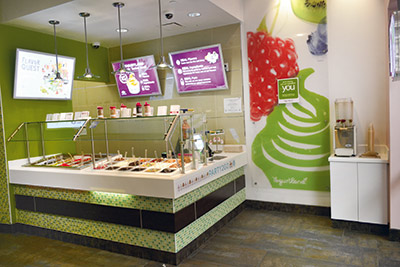 Yogurtland customers can choose from a wide array of toppings to create custom desserts.With consumers having so much of their daily lives preprogrammed, Yogurtland strives to change things up for its customers.

Founded 11 years ago in Fullerton, Calif., the 330-unit chain has sites predominantly in California, Washington, Utah, Nevada, Colorado, Florida and Texas. However, in recent years Yogurtland has concentrated much of its growth internationally in Thailand, Australia, Venezuela, Dubai and soon in Korea, Oman and Myanmar.

"We open 30 to 40 restaurants a year," says John Carlson, Yogurtland's senior vice president of marketing. "Most sites are franchised, but we have between 8 and 10 corporate restaurants."

Totaling between 1,200 and 1,500 square feet, sites include malls and traditional inline space. This self-serve model offers 16 frozen yogurt flavors created from 8 machines. Yogurtland sells everything by the ounce.

Plain tart is the top seller, but Madagascar vanilla also has a strong following according to Carlson. In the summer months, flavors revolve around fruits, such as Oregon blackberries. This past year, the focus has been on more homemade flavors, such as Marion berry pie and mud pie.

"It can be difficult to deliver complex flavors in one yogurt stream, but it's one of the things we do very well," says Carlson.

Yogurtland is testing a new retail image, too. Its front of the house currently consists of a raspberry and light green color palette that corresponds to the chain's logo, portraying a fresh and natural image. Green mosaic tile exhibits a shimmerry, earthy look offset by eggshell walls and colorful glass panels that include the brand story.

"We're changing out the mosaic tiles with a dark brown wood in Thailand and Bangkok, which we will extend to our newer locations in 2018," says Carlson.

What sets Yogurtland's business model apart is the fact that its yogurt is produced in California, refrigerated and put directly in its machines, which use glycol refrigerant. High-volume locations have a walk-in refrigerator that holds ingredients. "Less than 5 percent of our sites have upright freezers, while some use three-door units," says Carlson.

Yogurtland faces the same challenges as its competitors. "We really need equipment innovation, but technology has not changed much in the last 30 years," says Carlson. "As efficiency becomes more critical and the cost of raw materials and utilities keeps rising, it is make or break for yogurt shops. There is definitely opportunity for finding a way to minimize waste with these machines." 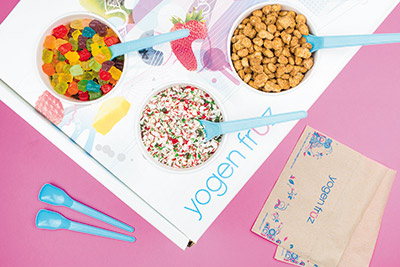 Yogen Früz offers low-fat, nonfat or sugar-free yogurt blended with a variety of different ingredients.One of the most notable survivors of the frozen yogurt wars, Canadian company Yogen Früz was founded by Aaron Serruya and his brother Michael back in 1986.

The fact that the company has survived the ebb and flow of the industry for more than three decades speaks volumes about its brand. In 2013, the Serruya family bought Kahala Corp., a privately owned franchisor of quick-service restaurants including Blimpie, TacoTime, Samurai Sam's Teriyaki Grill, The Great Steak & Potato Company, Johnnie's New York Pizzeria and Cold Stone Creamery, which they sold last year but still remain the largest shareholder. Two years ago, the Serruyas acquired competitor Pinkberry, which has roughly 260 locations in 21 countries.

"We get good insight with the Cold Stone Brand," says Serruya. "When one has an upswing, the other has a downswing."

Yogen Früz hasn't remained a player in the froyo wars by staying stagnant. These days, it's about pushing into the ice cream segment and vegan space with both chocolate and salted caramel offerings. "You can't stay still in this business or you won't survive," says Serruya.

While the frozen yogurt segment appears to be slowing down, Yogen Früz continues to expand its market to include countries where dessert is still a novelty. This includes such markets as Africa, South America and the Middle East.

With the exception of 5 Toronto locations, franchisees run all of Yogen Früz's more than 1,400 stores. It has sites in 53 countries. "If we add up all our ice cream and frozen yogurt brands, there are just under 2,300 locations, which includes Swenson's ice cream stores," says Serruya.

The concept takes many different forms, from 100-square-foot kiosks to 150- to 400-square-foot inline locations to 800- to 1,500-square-foot standalone sites. Seating ranges from 0 in the kiosks to 30 seats. Surprisingly, its strongest selling month is December in colder climates.

The chain offers low-fat, nonfat and sugar-free yogurt options blended with locally sourced fruit and a variety of other toppings. "Thailand hadn't seen frozen yogurt, but we incorporated lychee, a local fruit, and it became our number one flavor there," says Serruya. "Adapting to the market and understanding a country's culture is key."

There are between 15 and 20 signature flavors, including strawberry cheesecake, a best-seller that includes real cheesecake topped with strawberries. Up to 100 flavors can be created from one machine.

Yogen Früz's yogurt is frozen in portion-controlled bars that are pre-weighed and individually wrapped. Staff rips open the paper, then tosses the bar in the yogurt machine along with frozen fruit to be mixed, dispensed and served.

Equipment consists of two- and three-door standup refrigerators and freezers, a refrigerated sandwich table, a refrigerated cabinet for fruit and a blender for producing shakes and smoothies.

There's also a section for making waffle cones and Hong Kong waffles. The chain added the latter about 25 years ago and it includes fruit, chocolate chips and other ingredients within the waffle.

Yogen Früz has also created an app for customers to pay and collect points for free yogurt and relies on Instagram to create brand ambassadors, who are mainly Millennials. "We're very in tune with digital media, and we're watching new and up-and-coming concepts get great traction," says Serruya. "We learn from both old and new players."