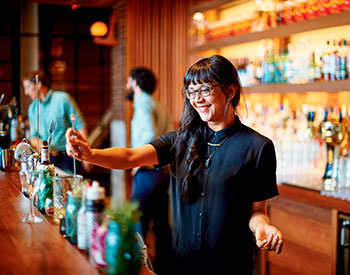 Spirit Guide Nandini Khaund, beverage director for Cindy's and in-room dining at the Chicago Athletic Association Hotel.Diners at today’s hotel restaurants may not even connect these eateries to the hotels they serve — that’s how far the experience has come. Many customers simply do not know (or care) that the hotel operates the restaurant: a far cry from the late 1980s when hotel restaurants served as amenities and were often not perceived well.

Hotel restaurants have come so far they can (and sometimes do) serve as destinations for travelers and locals seeking a quality dining experiences.

With most new restaurant projects, the menu dictates the kitchen. The opposite was the case for Cindy’s, a restaurant and bar that resides within the Chicago Athletic Association Hotel, which opened in May of 2015.

The design was three years in the making, bringing back aspects of a structure built for the World’s Fair in 1893. “We had to design our menu around the kitchen space, the way it was built and the equipment we currently had,” says Michael Mason, director of restaurants and bars for the Chicago Athletic Association Hotel. “So we came into this project already knowing what the kitchen would look like.”

The hotel uses two banquet kitchens (a main one on the eighth floor that handles the majority of Cindy’s production and a second-floor kitchen), as well as a smaller finishing kitchen adjacent to Cindy’s.

Logistics present the biggest challenge. Upon delivery, staff transport food to the eighth floor for heavy prep work. The exception to the rule: seafood and shellfish, which go directly to Cindy’s on the 13th-floor rooftop. 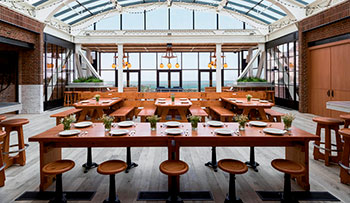 Cindy’s glass-enclosed dining room matches the seasons with its own metamorphosis. Photo courtesy of Chicago Athletic Association.“Food in the eighth-floor kitchen is prepped by a team of four, with the first batch shipped upstairs at 10 a.m. for lunch, then the next batch run up to Cindy’s for dinner service at 3 p.m.,” says Christian Ragano, executive chef. “There is a lot of cross-utilization of product between lunch and dinner, which helps streamline the process.”

Staff use carts to transfer cooled product in elevators from the 8th floor to the 13th. The door-to-door journey takes about four minutes.

Although Cindy’s space-challenged back of the house has an abundance of refrigeration (including a small walk-in cooler and substantial refrigerated storage on the hot lines), accommodating backup product remains an issue.

For this reason, Ragano likens the ordering process to the puzzle video game Tetris. “With our refrigerated storage constraints, we can’t order perishable product for banquets too many days out,” he says. “Instead, we need to bring in, prepare and serve most proteins the day of an event.”

Versatility is the name of the game at Cindy’s, not just with food production, but also with its ambiance and menu. Not many restaurants can pull off power lunches, family-style dinners, a late-night lounge atmosphere and lackadaisical Sunday brunches.

There’s also a seasonal metamorphosis, as the menu and decor transform from a beach feel with produce and numerous seafood offerings in the warmer months to a cozy atmosphere with comfort foods in the winter. 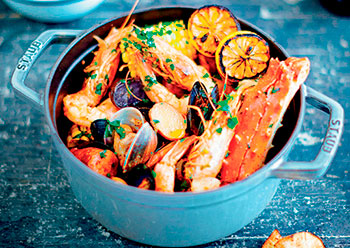 Frogmore Stew, which showcases the seafood-centric menu at Cindy's. Photo courtesy of Neil Burger.“We accomplish this with our decor, uniforms, candles and shifting our food and beverage mix,” says Ragano. “About 80 to 90 percent of our guests are not staying at the hotel.”

Cindy’s largely glass-encased dining room overlooks Lake Michigan and serves as the antithesis to the rest of the 241-room hotel, a former men’s club with masculine decor. Picnic table–style seating accommodates roughly 220, which includes the private dining room and terrace.

Dinners consist of platter service for family-style dining with seafood, steak, pork chops and duck, while lunch includes a selection of salads, plus innovative sandwiches and entrees, such as lamb burgers and prime steak tartine.

The kitchen may be small, but the equipment lineup of two fryers, a griddle, a six-burner stove, two ovens and a salamander is high end.

“Because we’re a glass-enclosed rooftop restaurant, there’s a stigma that we’re a spring and summer operation,” says Mason. “For this reason, we need to be smart about the food we serve and how we’re conceptualized.” 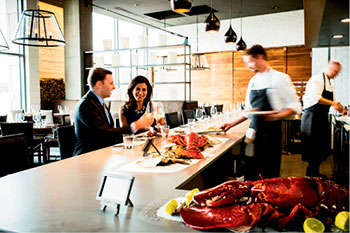 The casual-upscale ambiance at Wit & Wisdom appeals to locals and hotel guests alike.To survive in the competitive foodservice scene, a hotel restaurant requires not just a great concept but a vibe and buzz that set it apart as well.

Wit & Wisdom at the 256-room Four Seasons Hotel in Baltimore has this, along with the backing of renowned chef Michael Mina’s Mina Group restaurant conglomerate — though the restaurant doesn’t rest on the laurels of its famous owner.

“Wit & Wisdom is not a typical hotel restaurant, and it’s not treated as one,” says Tomas Vlasek, food and beverage director. “These days, customers are looking for a great concept, and it’s important to cater to locals and hotel guests.”

Described as a modern American tavern, the restaurant and bar focus on local cuisine, much of it created with ingredients procured from area farmers. The concept, which opened in November 2011, offers guests a variety of settings to choose from, including 85-seat indoor and 45-seat outdoor restaurants; 30-seat indoor and 16-seat outdoor bars; a 47-seat indoor lounge; a 45-seat private dining room; and the coveted 12-seat, back-of-the-house restaurant within a restaurant, The Kitchen Table. All feature individual menus.

Previously segregated from the front of the house by a wall housing a wood-burning oven, this area was opened to the dining room by a recent $500,000 kitchen renovation that included the addition of a chef’s table.

The Kitchen Table functions as home base for Oyster Hour from 6 p.m. to 7 p.m. nightly, which includes dollar oysters and a $5 glass of champagne. With built-in induction capabilities, the area flips to become a brunch station on Sundays and will repurpose itself again for themed events at some point. 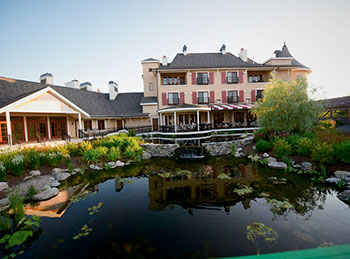 Inside Mirbeau Inn & Spa, a 2,000-square-foot kitchen handles three restaurants plus an event space.Along with the built-in induction burners, the revamp included the addition of an anti-griddle, a slicing machine for in-house charcuterie and a new garde manger station.

The seasonal menu, headed by executive chef Zack Mills, showcases a bevy of twists on traditional tavern food, including the signature lobster pot pie and bourbon steak burger, in addition to a selection of steak, seafood and small bites. An in-house master butcher prepares the charcuterie, such as salami and smoked duck bread.

Cold storage abounds, with refrigerated drawers at each station, refrigerators in the prep kitchen and, at the hot station, two walk-in coolers and a walk-in freezer.

The kitchen divides into a hot line with ovens and an infrared grill; prep area with sous vide; garde manger station for cold appetizers and salads; and a pastry station.

Purchasing plans include new self-cleaning speed ovens for baking and roasting that also function as steamers.

“With some hotel restaurants, the biggest challenge is competing with local spots, but we have a strong name and following, which are key,” says Vlasek. 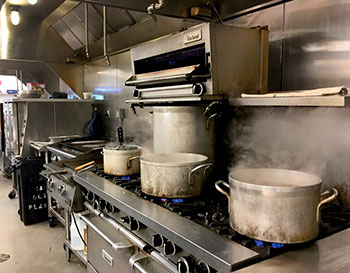 The centerpiece of the kitchen: the 10-burner range at Mirbeau Inn’s Bistro & Wine Bar.As if three restaurants and a 90-seat private event space weren’t enough, the future plan for the 50-room Mirbeau Inn & Spa at The Pinehills in Plymouth, Mass., includes adding space for a banquet kitchen/cooking school, bakery and chocolate shop.

“Rather than traditional or cookie-cutter restaurants, hotels are housing some unique concepts and different offerings,” says Stephen Coe, the chef at Mirbeau Inn. “Menus are more freestyle, evolving and seasonal, which wasn’t the case years ago.”

This is the hallmark of the French chateau-inspired inn’s foodservice operation, which includes the 75-seat Bistro & Wine Bar, serving breakfast, lunch, dinner and brunch; the Garden Bar, an outdoor bar and seating area with a wood-burning oven; and the Aqua Terrace, a casual-dining eatery.

The restaurant menus center on farm-to-table fare made with locally sourced ingredients. The Bistro & Wine Bar’s small plates range from grilled oysters with pancetta to pan-roasted foie gras, while entrees include a variety of seafood, such as pollen-dusted yellowfin tuna and butter-poached Maine lobster, as well as burgers, pasta and steak. Aqua
Terrace’s casual fare includes salad, sandwiches and burgers, while the Garden Bar cooks up a wide range of wood-fired pizzas.

“We source lobster locally and have our own beehives off-property for fresh honey,” says Coe. “It’s also important for us to cultivate relationships with local farmers.”

One 2,000-square-foot kitchen handles the production for all three restaurants and the event space.

“The back of house was designed for traffic control, with the main line serving as the hub and three separate entrances for each facility,” says Coe. “We initially wanted to go with a European cookline but found that an American line produces food faster. Still, our techniques and finishing touches have a European flare.”

The two-part cooking line has four main stations that break off into two ancillary areas. The pastry and garde manger areas roll into the hot appetizer station and grilled meat, expediting and fish/saute stations. Developing the larger main line was a trial-and-error process, but it now incorporates a selection of five ovens in different sizes, a convection oven; two sets of fryers; steamers; grills; flattop griddles; sous vide units; and a vacuum-packaging machine.

“I’m a saute guy, so we have one 10-burner range and I’m looking to add another,” says Coe.

The new multifunctional kitchen space will incorporate high-end equipment for banquet use while also accommodating a weekend cooking school.

“It will have separate stations set up for a certified course, where guests can learn to cook by mirroring what I’m doing,” says Coe. “The setup and equipment will be flexible to transform into a banquet or event kitchen when needed.”

Coe regularly visits shows to look for the latest trends in equipment, and although he has discovered innovative concepts, the majority are not realistic for Mirbeau’s operation.

Instead, he’s been known to create customized contraptions, such as jury-rigging a gallon jug with a spigot, copper plumbing line and hose that can be attached to a mixer to blend salad dressing oil.

Coe proved just as resourceful in making a name for the restaurants in the last three years. “Getting people to come downtown and visit us was a challenge, until we had a brand following,” he says. “Now, it’s not a problem.”

“With room service growing below average and mini bars going away, the big drivers of growth in hotels is banquets and catering,” says David Henkes, advisory group senior principal at Technomic.

Even mid-scale and economy hotels keep exploring new
avenues with smaller-investment foodservice variations, such as lobby kiosks or pantry food stores, according to Henkes. Lobbies are now more often built as flexible spaces with grab-and-go options, bars and/or restaurants.

Consistent with monetizing space, as hotels create more dining areas, back-of-the-house space becomes a premium. That has led to more multiuse equipment, such as combi ovens, and more than one kitchen or prep area at larger properties, according to Henkes.

An evolving macro trend suggests more bar-centric hotels will appear, with less defined restaurant, bar and lounge spaces and a more open feel overall. Across the board, from the bar to the restaurant to the lobby, the boundaries are going away, says Ned Barker, CEO of Grill Ventures International, a hotel and restaurant consultant based in Palm Springs, Calif.