As competition among fast casual restaurants grows fiercer by the day, top brands continue to streamline operations and bump up their catering and to-go methods to increase throughput, and of course, revenue. Such is the case with Uncle Maddio’s, a fast-casual pizza concept with roots in the Southeast.

After a system-wide rollout of a new online app and mobile ordering system last year, Uncle Maddio’s converted the second half of its customizable pizza line into a separate pizza-making station specifically for online and catering orders designated for pick-up and delivery. All new stores of the 44-unit, predominantly franchised chain feature the new setup, and the company finished converting existing stores last September, according to Scott Goodrich, COO.

“Our new online ordering option is a key step in boosting sales and building new revenue streams,” said Scott Goodrich, Uncle Maddio’s COO. “With our online ordering, high-speed ovens and high pizza throughput, we have a competitive advantage over other fast-casual pizza restaurants.” 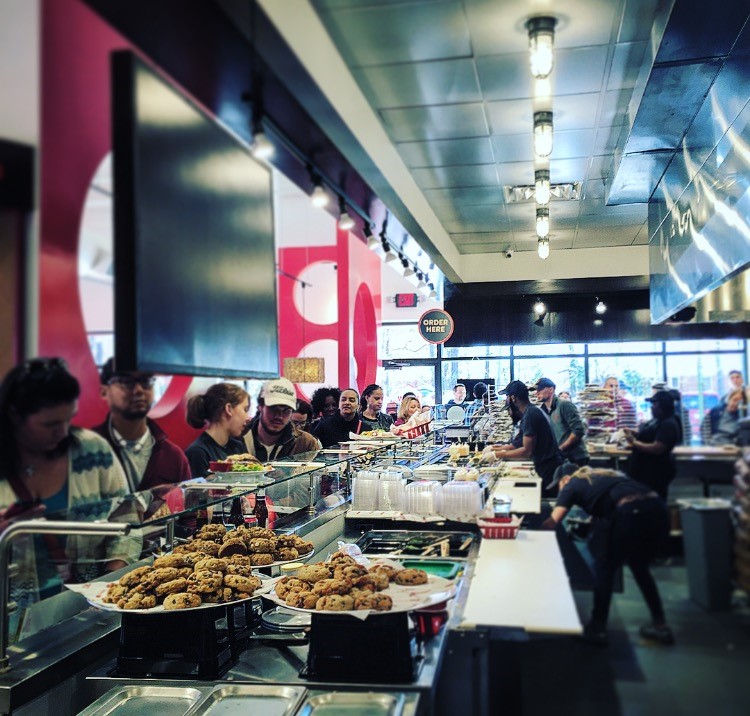 The new online ordering system and kitchen re-design came about after some of the franchisees asked Goodrich and Matt Andrew, Uncle Maddio’s CEO, for guidance on handling large phone-in orders during an already busy lunch service.

“A store in Cary, N.C. was getting clobbered with extra-large pizza orders called in on a Friday and Saturday night for pick-up when there was already a line out the door,” Goodrich says. “Our standard of service is six minutes from the time our guests order their pizza until they get it to their table.”

With 6-, 9-, 12-and 16-inch pizza size variations made from daily fresh-made dough, and 48 toppings, including 6 sauces, 15 meats and 27 vegetables, pizza customization always happened fast, but began getting interrupted by bulk pick-up orders at the same time.

In order to keep the in-store operations running smoothly and increase the efficiencies of pick-up orders, Goodrich and Andrew figured out a way to convert the second half of the pizza line, previously used as a hot-holding station, into a secondary pizza line with one to two pizza makers specifically assigned to online, call-in and catering orders.

“We converted the existing hot wells to cold well and made it one continuous topping and salad bar the whole way down, just making the second half a non-customer facing line to handle the catering orders,” Goodrich says. “We also moved the printer down to catering/order line so anything that comes through online goes straight to that line.”

The new online ordering and catering platform come with a few time parameters. For example, customers can’t order 50 pizzas and pick them up in 5 minutes. “We didn’t want to be the type of place where we can do pick-up, but you have to order two hours in advance,” Goodrich says.

Previous pizza throughput was approximately 200 pies per hour at its maximum. With the additional oven and line, franchisees can increase their throughput by 30 percent, according to Goodrich.

Adjustments were made to the secondary conveyor to handle both extra-large pizzas, common for online/catering orders as well as the chain’s Flatwich toasted Italian-style sandwiches. One 12-inch belt cooks sandwiches in just two and a half minutes alongside another belt at 24 inches for larger pizzas cooked in seven minutes, just one minute slower than the smaller size pies.

Back at the primary pizza-making line, Uncle Maddio’s assigns a pizza maker to each guest and they walk with the customer through the whole line before sliding the pizza onto the oven and “do si do-ing” back to the front of the line to pick up another guest, Goodrich explains. This way, the line’s not held up by multiple staff at multiple parts of the toppings bar if one guest knows what he/she wants but others don’t. Those speedier guests can then bypass the line, order quickly and sit down to wait for the pizza to be cooked.

Uncle Maddio’s began testing online ordering late last year as part of the rollout of some new POS equipment. Through the new online ordering platform, the system recognizes if the order comes from a computer or smart phone and will use geo targeting to locate the nearest restaurant. Then, users can choose their items and securely enter their contact and payment information as a last step. “We didn’t want to make people have to enter in all their credit card information if they just want to look through the menu on the app,” Goodrich says.

Ordered pizzas will be ready for fast and easy in-store pick up at the selected restaurant. Returning online guests can also quickly select a previous order as the system recognizes past purchases. The online ordering program is also 100 percent cloud-based and Goodrich notes the chain does not store any credit card information to maintain the highest level of security. In-store POP, Uncle Maddio’s loyalty club and social media platforms have helped promote use of the new ordering program.

Since launching the new online ordering platform last November, the chain has seen usage increase 10 to 12 percent per month and expects to realize a 22 percent increase in online sales, coupled with a 15 percent increase in mobile sales. Total sales at new store locations have also leveled off at a higher point, rather than dropping after the initial honeymoon grand opening phase.

“A new store might bring in 50K in the first week, but then drop down to $15K after that,” Goodrich says. “Now, those figures stay at the higher number.”

Daypart sales have increased as well, though it depends on the store, as some are only open for lunch. “We’ve seen an increase in online ordering on Friday and Saturday nights for locations in bedroom communities that serve dinner,” Goodrich says. “It’s exciting how customers can now use the app in different ways and it won’t interfere with normal in-store operations.”

Catering sales have also increased thanks to the second line and online ordering platform. Uncle Maddio’s offers four pizza sizes, including medium and extra-large as well as large salads, soups and desserts, beverages — even beer and wine — which are very popular for catering orders. Since the changes, franchisees have recorded raking in an additional $1K per month. At the downtown Charlotte location, which is surrounded by office buildings, catering sales have increased a whopping $6K per month.

Since launching its aggressive growth plan in 2008, Uncle Maddio's has signed franchise agreements with 65 different entities in 19 states. The chain, which operates 44 locations in 14 states, has more than 250 units in development.