Even after several remodels over the course of 41 years, the kitchen at Hendricks Regional Health remained a cramped space with failing infrastructure. 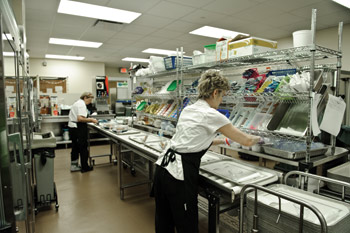 And the situation was just getting worse at the 160-bed hospital, which is located just west of Indianapolis in Danville, Ind. "We had multiple floor drains fail," says Martha Rardin, director of nutrition and dietetics for the hospital. "The iron pipes also had melted away over the years."

The last straw was a leak in the sewer line over the kitchen's production area.

Bottom line, the outdated design of this 3,100-square-foot kitchen needed a complete overhaul. The design process took about a year and included a new kitchen and dining area, in addition to a new emergency room and surgical wing. "Our administration allowed us to be involved, so it was our concept enhanced with the help of architects and a foodservice consultant," Rardin says.

After two years of construction, Hendricks Regional Health's Copper Grill was completed with a total price tag of $3.2 million, including a $1.3 million investment in equipment. This year the restaurant celebrates its fourth year in operation.

What helped make the process seamless was the fact that the old facility was utilized until the Copper Grill was complete. "Our staff was able to prep in the new space a month before we opened, so everyone could become familiar with the new facility," Rardin says.

With a total of 17,000 square feet, including a 7,700-square-foot kitchen and 2,265-square-foot servery, the new space has greatly improved efficiencies and the foodservice program overall.

Prior to the renovation, menu signs were written on chalkboards. A new digital menu system now provides customers with detailed information on price, menu items and calories. "We formerly had a three-week menu cycle and switched to a seven-week cycle," Rardin says. "This not only enables us to provide more varied offerings, but also helps control costs."

In the old kitchen, the storage area for refrigerated and dry goods was located in an inaccessible area where pallets wouldn't fit through the receiving door. "We would have to unpack pallets in the hall and move goods into the department," Rardin says. "With this new space, we can drive pallets directly into the freezer, walk-in and dry storage area, which saves labor."

The old servery design placed limitations on performing any on-demand cooking in the front of house. Now, the new facility has areas with action stations that utilize fryers, char grills and flattop grills and provide for a variety of uses, depending on the daypart.

Since labor was a big factor in the equipment specification, the antiquated dishmachine was replaced with a flight-type machine that is easier to clean and maintain. Among the technologies incorporated in the new design are an electronic temperature-monitoring system for cooking equipment, refrigeration units and a dishmachine that alerts Rardin when equipment is in and out of its proper temperature range.

High-density shelving was also added to the storage areas as well as to the walk-ins and freezer to maximize space. "This shelving has increased our storage capacity by close to 40 percent," Rardin says.

Cost-effective units were sought out for this project. Energy Star–rated equipment was used whenever possible, and ventilation hoods with variable drives were incorporated. The only equipment carried over to the new facility was the tray line. The old equipment was donated to a school in the community that was adding a lunch program.

"Now the flow in preparing foods is so much better, and production is much easier after the remodel," Rardin says. "We did a great job before and still do, but now patients can actually appreciate it."