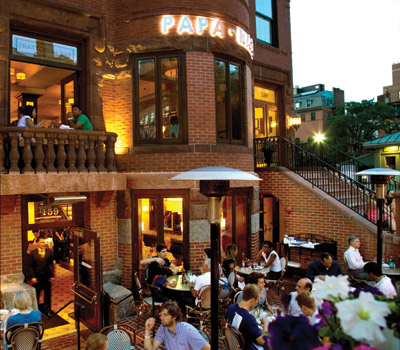 Papa Razzi first opened its doors 25 years ago as a true Italian scratch kitchen in downtown Boston.Led by famed restaurateur Charles Sarkis, the goal was to bring a lighter style of Italian cooking to the East Coast at a time when Italian cuisine in the U.S. was synonymous with heavy marinara. Unlike other Italian eateries, where sauces typically simmered for hours before being served, Papa Razzi made its meals to order. This became a key ingredient in the restaurant's recipe for success.

In August 2012, Papa Razzi was purchased by Newport Harbor Corp., owner and operator of the Newport Restaurant Group and Castle Hill Inn. Today, with five locations throughout eastern Massachusetts and another Rhode Island site, the multiunit concept continues to evolve.

Locations vary in size and interior design, ranging from 5,000 to 11,000 square feet with between 150 and 300 seats. The modern trattoria decor consists of wood tones and a red, beige and cream color scheme.

In the first quarter of 2014, Papa Razzi overhauled the menu, the chain's first major change in 15 years. Papa Razzi's locations in Concord, Mass., and Cranston, R.I., have begun sourcing more local produce and seafood, a practice that will soon extend to the chain's four other sites. "We refreshed the menu with a focus on lighter cooking and more flavorful dishes," says Kevin DiLibero, Papa Razzi's culinary arts director. "It's a more simple approach to food with a focus on high-end ingredients."

The menu offerings remain consistent at all six sites, and ingredient changes have been subtle yet distinct. For instance, the oven-roasted salmon previously came with Yukon Gold potatoes and spinach but is now paired with roasted red and yellow beets, fennel, Yukon Gold potato hash, baby arugula and pine nuts. Daily and weekly specials are also on offer.

Another focus has been on salami and antipasti, which have become more popular on authentic Italian menus. The seven antipasti include bruschetta, beef carpaccio, and rollatini melanzana with egg-battered eggplant, herb- and garlic-scented ricotta, prosciutto and pomodoro sauce. 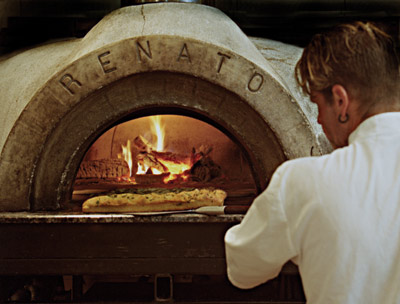 Papa Razzi has an open kitchen with a wood-fired oven as its centerpiece.One of the menu's signature components, oak-fired pizza, comes in six varieties, such as the Polpetta with meatballs, and Piccante with pepperoni and sausage. Chefs also offer daily pizza specials.

Maintaining the menu's approachability and broad appeal was key in developing the new dishes. Papa Razzi serves a varied demographic that includes businesspeople, couples and families. While its Concord and Wellesley locations do strong takeout business, the chain also emphasizes private dining and large groups at its sites.

"One big challenge in the Italian restaurant segment is not getting too caught up in the trends," says Corey Barriera, Papa Razzi's regional director of operations. "So many restaurants focus on what's hot, fresh and new, but Italian food is meant to be simple. We want to stay true to our Italian roots and how the food is created."

Like the menus, each site's open kitchen features a similar setup, with a wood-burning pizza oven as the centerpiece. Other main pieces of equipment include a grill, six-burner range and convection oven as well as a tilt skillet for producing stock and sauces. Larger locations also have a prep area with tables and 60-quart mixers for preparing pizza dough.

Papa Razzi's spring 2015 renovation of its Burlington site will include an updated kitchen equipment package. For example, the chain will replace the six-burner range with a finishing oven and add both a combi oven and gelato machine. "Durability is the biggest factor we look for when choosing equipment," DiLibero says. "These units can't break down during busy periods, so we look for reputable brands."

In the months ahead, the menu will continue evolving to include more regional dishes with simple ingredients. "I recently spent a week in Italy, and the most extraordinary meals I had were the simplest," DiLibero says. "That's what we want to bring to our menu. When the food is as approachable as ours is, it appeals to a wide demographic."

Although there are currently no plans for expansion, Papa Razzi's will eventually duplicate its Burlington overhaul in its other locations.