Consumers’ thirst for locally produced brews and other menu items continues to drive interest in the burgeoning brew pub segment. 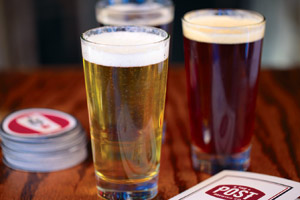 The Post Brewing Co. offers seven microbrews that are constantly changing and include a pilsner, lager, IPA, porter, stout and Belgium-style brew. In theory, a brew pub is similar to a microbrewery, except on an annual basis the former produces less than 15,000 barrels of beer (there are 31 gallons in a barrel). Brew pubs produce beer primarily for sale in the restaurant and bar, dispensing it directly from the brewery's storage tanks, according to the Brewers
Association, based in Boulder, Colo. Where allowed by law, brew pubs often sell beer to go and /or distribute to off-site accounts.

There were 2,347 craft breweries in operation for some or all of 2012, the last year for which statistics are available, according to the Brewers Association. In looking at the beer industry as a whole, craft brews account for 6.5 percent of sales by volume and 10.2 percent of sales by dollars, according to the Brewers Association. Craft brewer retail dollar value in 2012 was an estimated $11.9 billion.

"What we've seen is those who open brew pubs already have existing restaurants and decide to add a brewery," McLeod says. "There also are operations that go back and forth between being a microbrewery and a brew pub."

Brewing equipment does not require a large footprint when operators produce smaller volumes of the frothy beverage. This allows a number of restaurants to get into the business with minimal investment. Also, a growing number of restaurants now partner with local microbreweries to serve their beverages.

Another trend is a shift toward microbrews with lower alcohol content. "This is a change from a few years ago, where the focus was more on big beers with a higher percentage of alcohol," McLeod says.

Also on the rise are collaboration beers, or lines produced by more than one microbrewery. "About 75 percent of breweries are currently offering these beers," McLeod says.

Barrel aging beer represents an emerging trend too, as more beer makers now choose to age their brews for 20 to 24 months in whiskey barrels to infuse flavor into the beverage. Canning, rather than bottling, also has become more common with craft brews. This enables brew pubs and microbreweries to set up a canning line within their operations or hire a business to do the packaging.

"The craft beer industry has one of the most loyal customer bases," McLeod says. "These consumers are very supportive of brew pubs."