Schools across the country suffer from antiquated infrastructure, and Knox County's 16 high schools were no exception. The Tennessee schools' 40-year-old serving lines needed major revamping. The challenge was not only how to accomplish this on a limited budget, but also how to do it in a way that would increase efficiencies and program participation. 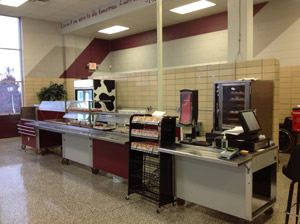 After the renovation, Bearden High School’s serving lines were better organized and more aesthetically pleasing to students.The district had been spending $750,000 annually on its foodservice equipment repair and needed to bring this amount down to a more reasonable $200,000 per year.

"In 2012, we spent $1.7 million on equipment renovation, about 6 percent of my total budget, but were able to grow sales and revenue about 5 percent," says Jonathan Dickl, Knox County Schools' director of school nutrition. "Unfortunately, with food costs climbing almost 5 percent, it was difficult to make ends meet."

Bearden High School in Knoxville, Tenn., previously served as the food production center for seven of the district's schools, but this changed when it was determined that it would be more economically feasible to make each Knox County school function independently.

When renovating Bearden High School, the goal was to improve points of access for students and increase participation in the school lunch program. With the majority of the district's food sold a la carte, the strategy with the serving line renovation needed to shift to reimbursable meals. "We were most fearful that we'd lose a la carte meals and not capture them in reimbursable meals," Dickl says. "In an effort to renovate more economically, we realized it was necessary to invest in [the front of house]."

A decade ago, when school budgets were less restrictive, a food court design would have been the obvious route to take. But with the district's food costs increasing $1 million in 2012 and food court construction alone costing $250,000, this was not an option. The double whammy of school finances drying up and increased school nutrition regulations forced Dickl and his team to become more creative.

To provide the biggest impact and position the food items to be more appealing, the decision was made to update Bearden's serving line. The net result was a hybrid concept that includes branded serving lines with offerings mimicking those at popular fast-food and full-service restaurants.

From an infrastructure and design standpoint, Bearden had an excessive amount of equipment in its kitchen. Still, there was some tweaking to be done. The district began installing more steam-based equipment in its schools, like combi ovens, to better prepare and hold the increasing amount of whole-grain items required by school nutrition guidelines.

"Instead of purchasing a double-stack oven for $6,000, we are buying a combi for $14,000," Dickl says. "Because we're spending twice as much for this equipment, we had to keep the cost of remodeling the serving lines down significantly."

The challenge also involved changing the serving lines to provide a more upscale, collegiate appearance. Prior to the overhaul, Bearden High School had four serving lines spread out into two separate areas, plus another serving area. This antiquated scatter system had no uniformity or established queuing system.

The $165,000 renovation expanded the number of access points to 7, up from 5. This includes a pair of two-sided serving lines and an express concept that replaces two walk-up areas. With the new design, the queuing strategy became more user-friendly as well.

The new menu includes four kid-friendly brands. One of the most popular, Gianni's of Knoxville, offers New York-style hand-tossed pizza, pasta and calzones. These products account for between 30 percent and 40 percent of food sales. "We are producing between 800 and 1,000 pizzas a day at an old high school food production center and utilizing a distributor to deliver these to our schools," Dickl says. Pizzas are shrink wrapped and blast frozen. "This has driven down our pizza costs, while allowing us to offer restaurant-quality pizza."

The school's Hencredible chicken brand also makes up between 30 percent and 40 percent of foodservice sales. Another concept, World's Fare, offers specialty sandwiches and international dishes like teriyaki chicken as well as American fare, including pot roast and mashed potatoes. A new brand, Healthfull, is a seed-to-fork concept that offers salads, smoothies and wraps made from locally sourced ingredients.

Some reconfigurations in the kitchen were necessary to better support the new serving line concept. For example, reach-ins and warming cabinets have been repositioned for better access. Newly installed hot and cold shelving can be switched back and forth. More chutes and hot plates have been added, dramatically increasing the operation's versatility.

Because the changes are so recent at Bearden, the impact on sales is not yet known. However, the minimal serving line investments have paid off at other district high schools.

For example, prior to its renovation, Knox County's Farragut High, one of its more affluent schools, had one dual-sided serving line and an a la carte line. As for the decor, walls were a bland cream color with a juvenile-looking mascot on the wall. Similarly, serving lines were highlighted with primary colors, such as red, yellow and blue.

Over Labor Day weekend, the cafeteria was painted khaki, black and off-white. The outdated mascot was replaced with Gianni's and Hencredible logos. Also, the serving lines were updated with textured black, stainless steel and glass accents. "It has a totally different feel," Dickl says. "Since the renovation, we're serving 15 percent more lunches, and breakfast sales have almost doubled."

At Knox County's Fulton High School cafeteria, the goal was to increase students' points of access, update the serving lines and provide healthier food options. With this project, serving lines were upscaled with faux brick wallboard; a Gianni's kiosk and two serving lines were added, and a huge falcon mascot was designed by students to adorn a wall.

"Now we are serving our 1,200 Fulton High students 200 more meals per day," Dickl says. "These cheap, rather than deep, renovations [have paid off]."

He says in the years ahead the trend in high school foodservice will be to draw more kids to reimbursable meals, since a la carte concepts are taking a hit with increasing food costs. "We have to create value and cafeteria designs that mirror fast-food and QSR outlets," Dickl says.