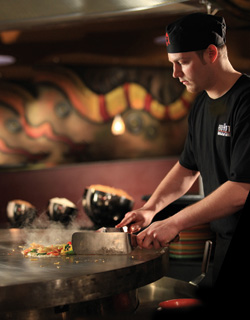 HuHot Mongolian GrillOne would be hard-pressed to find a restaurant that doesn't incorporate some aspect of Asian ingredients on its menu. From Asian-inspired salads at fast-food restaurants to egg roll appetizers and stir-fry dishes, this cuisine has become one of the most prevalent in foodservice today.

"In the last five to seven years, there has been an increase in Asian influence and fusion on menus," says Robert Schafer, who runs Creative Culinary Consultants in Mission Viejo, Calif., and is head of culinary services at Profit Line Consulting in Rancho Belago, Calif. "[More] restaurants are implementing Asian ingredients, flavors and presentations into their dishes."

As people's palates have become more sophisticated, Asian influences have evolved from traditional Chinese elements to include Japanese, Thai, Korean and Vietnamese ingredients.

The limited-service Asian/noodle segment alone totaled $4.144 billion in 2012, up 12 percent from $3.7 billion the prior year, according to Chicago-based research firm Technomic. By comparison, the full-service Asian segment totaled more than $20.4 billion, up 5.1 percent from 2011.

"Within the Asian restaurant segment, fusion as it pertains to versatility of core ingredients is probably one of the most salient trends," says Dean Small, founder and managing partner at Synergy Restaurant Consultants in Laguna Niguel, Calif. "For example, Japanese miso is used in a myriad of preparations, like in dips, dressings, braises and marinades. The same is true with Korean kimchi. Enterprising chefs are using the condiment in a way that doesn't undermine its culinary lineage but also in a way that pushes the envelope."

Formerly found mainly on the West Coast, sushi is fast becoming a nationwide favorite for a broader demographic. "Fifty years ago, sushi remained a tradition specific to a very discrete subset of Americans," Small says. "Over the years, it burgeoned from a simple Japanese street snack to an indispensable icon on the American culinary landscape."

It is thought that this evolution is an indirect result of federal fishing legislation. The Magnuson-Stevens Fishery Conservation and Management Act of 1976 established territorial waters to inhibit overfishing and also allowed fishermen to invest in equipment that could freeze freshly caught fish at sea. This increased the availability of sushi-grade fish.

The preparation of sushi also appeals to consumers' appreciation of food as theater. "There was a slow yet steady advent of crudo, carpaccio and tartare on the menus of high-end establishments, and sushi followed in strong suit," Small says.

This is further proof that, in the last couple of years, Asian menu items have become more focused on different countries and regions within these areas. "Instead of saying Asian cuisine is Japanese and Chinese, we're starting to see an influx of Vietnamese and Indonesian cuisine that is more country specific with ingredients, flavor profiles and spiciness," Schafer says.

The flavorful and healthier aspects of Asian dishes are on trend, bringing even more relevance to this segment. "The popularity of Asian cuisine lies in its simplicity as well as an uncompromising emphasis on ingredients and the flavors each ingredient imparts," Small says. "The hallmarks of Asian cooking are the use of few ingredients and concise cooking methods so that the diner will garner an intrinsic sense of the ingredient employed."

These dishes often employ simpler, quicker cooking methods. "In Asian cuisine, 90 percent of the entrée work is in prep, and only 10 percent is in cooking, because it's cooked so fast," Schafer says.

As a result, kitchens focusing on Asian cuisine tend to be more basic when compared to other concepts. Yet these types of food do require some specialty equipment. "Multichamber Chinese cooking ranges have definitely come a long way," Small says. "And the advances in that equipment reflect an increased demand for the fare it's used to produce. The fact that these ranges are outfitted with standard features that once were custom, like clog-resistant standing pilots with individually controlled valves, means that they are made more efficiently and innovatively."

With varied and healthier ingredients, flavorful yet lighter sauces, and quick and, sometimes, theatrical preparation, Asian dishes appeal to a wide demographic looking for flavorful, more nutritious foods that can be served quickly.