Typically a truck crashing into the front of a building brings with it negative repercussions. In the case of Dinkel's Bakery in Chicago, the event was a blessing in disguise. 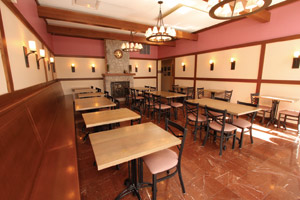 In creating the café, Dinkel’s converted a previously leased storefront into this seating area. Photo by Ron Gould. The accident affected a part of the building that bakery owner Norman Dinkel Jr. was leasing to a custom T-shirt printing business. After the tenant moved out permanently, Dinkel's management decided that leasing the space to another business was not a good option since a number of other vacant offices were available for lease in the neighborhood. "We initially had a few ideas to expand the bakery and increase sales," says Luke Karl, general manager and son-in-law to Norman Dinkel Jr. "One suggestion was to put in a microbrewery, but none of us knew how to do this. We also considered moving our cake-decorating room to make it visible to people on the street."

Although bread sales represent just 5 percent of business at Dinkel's, the management team decided that adding sandwiches to the menu could help the business grow. "We were making bread anyway, so we realized that sandwiches would attract midday traffic," Karl says. This was a big transformation for the German bakery, owned and operated by the family, and opened in 1922 by Joseph K. Dinkel, who passed the business onto his son, Norman Sr. (father of Norman Jr.).

The expanded fast-casual café business model was the first big change for the bakery since it moved into its current 18,000-square-foot space back in 1926, although it has undergone expansions and revamps over the years. A staple on the city's North Side, Dinkel's is known for its holiday stollen, strudel, cookies and cakes.

Since the operation resides in separate but adjoining buildings, the expansion occurred in two phases. Because the structure was built in the late 1800s, a few challenges had to be overcome. It soon became apparent that creating a cohesive flow with two spaces and two businesses would be easier said than done.

"We hired an architect to design the space, but my wife also played a big part in both the design and aesthetics," Karl says. "We realized it was necessary to repurpose much of the space by adding another kitchen and expanding our refrigeration space beyond a two-door cooler."

The café area was the original site of the bakery before it expanded north in 1946. The space had been renovated and leased out for the last 60 years. So in developing the new café space, logistics and accessibility became the focus.

The entrance was moved from the far south part of the operation to the north side. The new location, by the café kitchen and cake boxing area, increased efficiencies and served as a single entrance for both operations. "Prior to the remodel, the café and bakery space were not linked," Karl says. "We ended up cutting a hole between the two buildings to create a natural passageway for easier accessibility."

The 16-seat dining room was expanded to 48 seats in the formerly leased space, which would be accessible to café customers yet out of the way for those running in to pick up bakery items. There was initial concern that locating the seating area on the south side of the business and the sandwich-making area on the north — with the large retail bakery separating the two — would be an issue. "We couldn't get the seating area and café kitchen side by side, but the layout works fine," Karl says. "The location has helped make our bakery customers more aware of the café. It wasn't the ideal situation, but we had to work with what we had."