Lesson Learned: Food trucks can test-drive a concept and build a solid customer base before a brick-and-mortar restaurant opening. 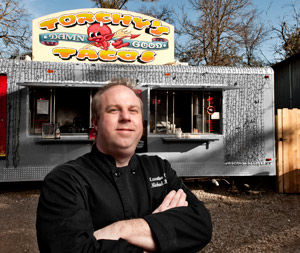 Torchy's Tacos food truckOnce a lone food trailer serving authentic tacos, Torchy's Tacos has grown exponentially since its first brick-and-mortar location in 2006, with 14 stores in Dallas, Houston and its home base of Austin.

So why keep the trailer if you have a restaurant or two? "It had a lot to do with our culture and where we came from," founder Mike Rypka says. "Why shut something we're still doing well?"

The Torchy's Tacos truck/trailer, which started as a means for testing a concept and building a solid customer base, continues to serve as a powerful marketing tool and a way to try out new menu items. Expert menu engineering has also contributed to Torchy's growth. "You have to make sure you have enough equipment for your menu needs, but scale down your menu enough to fit the confines of the truck," Rypka says.

On the truck, a simple equipment package consisting of a flattop, stovetop with burners, fryers, steam well and refrigeration can produce a menu of tacos stuffed with green chile and pork carnitas, fried chicken and poblano sauce, shredded beef barbacoa and tomatillo salsa, and vegetarian fried avocadoes. Prep work happens at the brick-and-mortar locations where there is extra staff, storage and slightly expanded cooking equipment.

Even when transitioning from a commissary to a brick-and-mortar spot, Rypka decided to stay true to the concept's original menu. "The brick and mortar gave us room to expand, but we still kept the same menu in the trailer as in the rest of the company. We decided if we can't make something in the trailer we wouldn't have it in the restaurants." Still, with brick-and-mortar stores spanning between 1,000 and 4,500 square feet and with 60 to 120 seats, Torchy's pulls of a pretty sizeable menu by cross-utilizing food and staff as much as possible. Rypka has sped up the chain's service by instituting online ordering for its truck and store locations, even enabling customers to place their orders while waiting in line.

"I think there's a niche in the food truck landscape in that if you're good, you'll stay, and if you're not, you won't," he says. "It might look different as far as how many trucks are around, but I feel it's becoming ingrained in the culture as another outlet for a rebirth of street food."