Despite pizza being one of the most established foodservice industry segments, consumers' appetite for it appears to be heartier than ever. By keeping their products customizable and embracing old-world cooking techniques, operators are keeping the segment fresh in their customers' eyes. 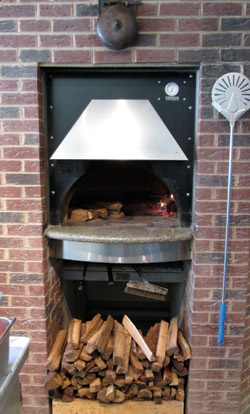 Central to Hard Knox Pizzeria’s operation is its wood-fired oven.The appeal of pizza – one of the most popular foods in the U.S. – has escalated as a growing number of foodservice operators have added traditional pies to their menus.

Although sausage and pepperoni remain the most prevalent of all toppings, an increasing number of gourmet and eclectic pizzas incorporate unique ingredients. Foodservice operators now use ingredients ranging from seafood to fruit to healthier proteins like chicken.

The most recent menu focus among pizza operators has been authentic varieties, with Neapolitan style topping the list. Utilizing more traditional cooking methods, such as wood ovens, has also grown in popularity.

The more diverse pies may be responsible for the pizza category's growth in recent years. In 2011, the pizza segment totaled slightly less than $30 billion in sales, up 1.5 percent from $29.5 billion in 2010, according to Technomic, a Chicago-based foodservice market research firm. Unit counts decreased slightly during that time period, totalling approximately 67,300 units in 2011 compared to 67,550 in the year prior.

Pizza consumption has increased over the past two years, with 41 percent of consumers surveyed reporting that they eat pizza at least once a week, compared to 26 percent who said the same in 2010, according to Technomic's "Pizza Consumer Trend Report".

Dine-in and carryout pizza occasions increased the most over the past two years, according to the report. Nearly half of the pizzas that consumers order from restaurants or other foodservice locations are for carryout, while about a third are for delivery and a fifth are for dining in. Although ordering pizza via telephone is still most common, online and mobile app delivery orders continue to catch on, especially among young consumers.

Like topping varieties, crust types have expanded from thin and deep dish to flatbread, cheese-stuffed and gluten-free. Sauces, the base for most pizzas, have become more varied. In addition to red pizza sauces, white or alfredo sauces have been on the rise in recent years.

Today's consumers favor a slightly spicier pizza sauce, according to the Technomic report. Garlic is the main ingredient in three of the top four preferred pizza sauces, which include marinara, garlic parmesan, plain garlic and roasted garlic. Pizza is no longer defined by a mozzarella topping. Other cheese varieties, including parmesan, cheddar, provolone, feta and Gorgonzola, are popular alternatives, especially on gourmet pies.

With the burgeoning pizza varieties comes increased competition. Limited-service restaurants that don't
specialize in pizza have become bigger players in the segment. More than a third of consumers now purchase pizza from non-pizza LSRs monthly, according to Technomic's report.

Looking ahead, pizza segment trends will continue to mirror the foodservice industry as a whole – offering value, healthier options for consumers and innovative toppings, crusts and sauces.