A testament to TacoTime's success is the longevity of its franchisees, many of whom have been in business for 30 to 40 years. 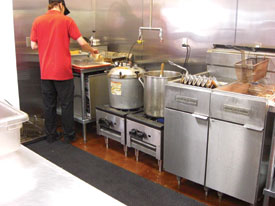 Founded as a walk-up restaurant in Eugene, Ore., by Ron Fraedrick back in 1960, the QSR chain went international in 1978, opening a location in Alberta, Canada. In 2003 the operation became a wholly owned subsidiary of Kahala, which owns a number of brands, including Blimpie and Cold Stone Creamery. TacoTime now has 250 stores in the U.S. and 125 locations in Canada. All but 11 locations are franchised.

Competing in the crowded Mexican foodservice segment, TacoTime strives to set itself apart by concentrating on fresh ingredients, food preparation and generous portion sizes. "We're old school and spend a considerable amount of labor dollars to create fresh products," Gingrich says. "One of the major differences in our operation is the amount of food prep that's performed at the store level." The average store allocates 20 percent to 25 percent of its daily labor dollars to food preparation.

"We're unique in that we don't utilize inexpensive products," Gingrich says. "We've concentrated on offering larger portions with higher-quality ingredients." Yet TacoTime has not lost sight of the fact that consumers expect lower price points for Mexican fare.

TacoTime's menu does include value items, although they are not the focus. Alongside complete entrées priced from $3.99 to $5.99 are selections that range in price between $1.59 and $1.99. Other options include a "4 Items for $5" value menu and daily specials. Burritos average between $2.99 and $3.99.

The crisp burrito, one of TacoTime's bestsellers, is hand-rolled and deep-fried. Customers can choose to fill it with chicken, ground beef or pinto beans. Other popular items include quesadillas, taco salads and plate entrées, such as enchiladas and chimichangas served with rice and beans. Mexi-Fries – deep-fried potato rounds – are a popular side.

Taco Time's prototype will work in a variety of formats and locations, including freestanding units, in-line units in strip centers, mall units, convenience stores and on university campuses. "We have a standard footprint, but every site varies," Gingrich says. "For example, if the site is in a mall, it may be only 600 square feet as opposed to larger units, which are as big as 5,000 square feet."

The flexible kitchen lineup accommodates sites with limited space. "If a store is tight on space under the ventilation hood and needs refrigeration, we'll utilize a 36- or 72-inch drawer refrigerator," Gingrich says. "In this case, we'll use a hot plate on top of the refrigeration unit to cook meat and sauces, instead of installing a freestanding range."

An 8- to 12-foot ventilation system is positioned over the cook line. "We cook all of our ground beef fresh, adding spices and seasonings, on a range," Gingrich says.

For fryers, the chain is flexible in terms of what type is used. Depending on space, the operator can choose from either double or single units, but recovery time is always an important consideration. "We need at least two or three fryers total, in addition to a separate dump station," Gingrich says.

Despite menu expansions over the years, TacoTime's equipment lineup has remained the same, for the most part. "We can handle new items with the same equipment, with the exception of the grills, which we added a couple of years ago for our quesadillas and grilled burritos," Gingrich says.

In addition to quality, how the equipment contributes to the operation's overall efficiency is important. "The more compact a unit is, the more efficient the kitchen will be in terms of minimizing steps for production," Gingrich says. "Ease of use, reliability and safety also are important factors."

With the onslaught of fast-casual Mexican concepts, in addition to established chains, TacoTime has sought to differentiate its menu. Half of its sites now offer breakfast, which will become available in all units in March of this year. This includes five breakfast burritos, a breakfast quesadilla and biscuits with gravy. "Most of our staff is already on site in the morning, so these offerings were easy to implement," Gingrich says.

The chain has also implemented menu changes due to high beef costs. Pork, which is typically available for a limited time, will become a permanent part of a variety of menu items this year, including burritos, enchiladas, chimichangas and quesadillas. "We plan to offer a new pork product every couple of months to help offset the cost of beef," Gingrich says.

Looking ahead, the TacoTime brand continues expanding, with an average of 5 to 10 stores opening each year in both traditional and nontraditional sites. "The Mexican QSR and fast-casual segments are very competitive," Gingrich says. "We will continue offering innovative products made with fresh ingredients prepared in-house as we have done for more than 50 years. It may not be the easiest way, but it's the right way."